Reconsidering the Necktie
By Brian B. Williams 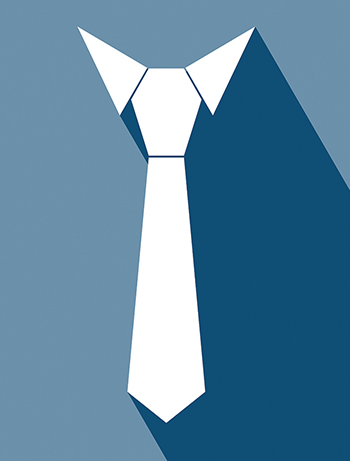 UTCR 3.010, titled “proper apparel,” specifies that, “when appearing in court, all attorneys and court officials must wear appropriate attire.” What is “appropriate” attire? The rule provides no guidance. While the rule is vague, custom is not. Men must wear a coat and tie in court.

The necktie is a useless fashion adornment with nothing practical to commend it. Ties make no more sense than lace, ruffles or sagging jeans. It is an anomaly of evolution that would never reoccur. There are many good reasons to not wear a tie.

1. Ties are an historical relic. According to Wikipedia, the modern necktie traces back to the Thirty Years’ War of 1618-1648 when Croatian mercenaries in French service wore small, knotted neckerchiefs that started a battlefield fashion. The fashion was picked up by the boy-king, Louis XIV. King Louis started wearing lace cravats about 1646. A fashion craze swept Europe with both men and women wearing fabric around their necks. https://en.wikipedia.org/wiki/Necktie/. The necktie is just silly historically much as the ridiculous dusty, white wigs judges traditionally wore.

2. Ties are unsanitary and a health and safety hazard. Name one other article of clothing that never gets laundered. Studies have confirmed that neckties carry pathogens. One study found that one-third of doctors’ neckties harbored an antibiotic resistant form of staph — yuck! Some hospitals now forbid doctors from wearing ties, and others recommend against it.

3. Even clean ties are bad for your health. As we age, many of us gain weight, resulting in tighter and tighter shirt collars, leading to risk of vasoconstriction. One study found increased intraocular pressure from wearing ties. When paramedics perform life support, one of the early steps is removing a man’s necktie to ensure it isn’t blocking his airway. If you’ve ever worn a shirt that was a touch too small, none of this is a surprise to you. Your tie is killing you slowly.

4. Neckties are useless. They serve no practical function.

5. Neckties are an elitist status symbol. Like the white shirt, ties are a symbol that the wearer is not a manual laborer. Nobody who labors could wear a tie. It is an entanglement risk and hinders freedom of movement. Can you imagine an auto mechanic wearing a tie? That is the point — the necktie symbolizes that the wearer is above manual labor and entitled to a greater level of respect. Many people with highly respectable jobs at top companies have causal dressing requirements for “white collar” employees. You can be a serious heavy-hitter in the business world and never wear a tie. There is nothing undignified about manual labor or elite about a desk job.

6. Neckties are sexist. Men appearing in court don’t really have a choice about them. Women can, but need not and typically don’t, wear a tie. Name any article of clothing women must wear in court. Imagine how you would feel about a rule requiring women to wear a skirt or dress to court and not pants. Such a rule would appropriately be ridiculed. Somehow, men were saddled with the inflexible requirement of a tie for court appearances, and the standard isn’t ridiculed.

7. Ties put form over function. Overweight men wear ties and jackets to court all through the summer. Ask yourself, what is the purpose of clothing? You would never dream of wearing a turtleneck and sweater in August. Yet men wear a dress shirt buttoned to the neck, a necktie and coat in August without thinking twice? Dumb! It essentially guarantees arriving at court pitted-out and sweating if you walk more than five blocks in the summer.

8. Neckties ignore the physiological temperature differences between men and women and increase conflict over the thermostat setting. A sleeping bag rated at 30 degrees for men is rated at about 35 degrees for women. Women’s bodies run colder than men’s. Women’s fashions allow for cooler clothing. This means colder people are wearing cooler clothes, while warmer people are wearing warmer clothes, amplifying the natural differences in what we regard as a comfortable temperature. Getting rid of the necktie could reduce conflict over the thermostat.

9. There are no arguments in favor of mandating neckties beyond dogmatic adherence to tradition.

Whether you consider the issue from the standpoint of gender, health, comfort or utility, one cannot defend the necktie as required apparel. Neckties should be a choice, not a requirement.

About the Author
The author practices civil litigation, mostly insurance defense, with Hitt Hiller Monfils Williams in Portland. Whenever possible, he is liberated from his tie, usually within two blocks of leaving the court house. A footnoted version of this article appears online.