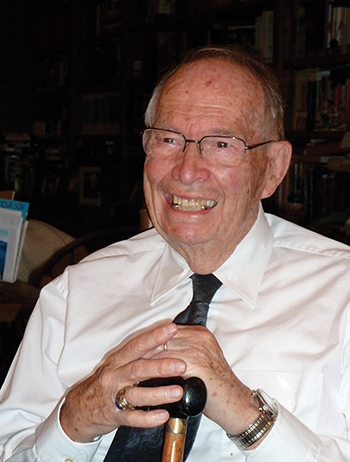 The Withycombe name is well known in Oregon’s history, from James Withycombe, who served as the state’s 15th governor, to Withycombe Hall on the Oregon State University campus and Camp Withycombe, home of the Oregon Military Museum in Clackamas.

Longtime attorney Tom Withycombe, grandson of former Gov. James Withycombe, has carried on the family’s tradition of public service, community involvement and philanthropy. While poor health prevented him from speaking directly in an interview with the Bulletin, his wife Kathy, a registered nurse, answered questions on his behalf and shared a brief account Tom had previously written about his military service and how he became a corporate lawyer. It turns out the two interests were intertwined for several years.

As Kathy tells it, Tom wasn’t really sure about his career plans heading into college, but he had a scholarship from the Naval Reserve Officer Training Corps (NROTC) so he attended Columbia University in New York City and served on Navy assignments during the summers.

“He had always been such a history buff, and he read voraciously and knew about all the battles,” Kathy says. “As a little boy he couldn’t afford to buy toy soldiers, so he made them from cardboard, colored them and played with them in battles.”

While at Columbia, Tom took an aptitude test to help determine which career he should pursue. The test results suggested he would either be a good pastor or attorney. Both professions require a broad expanse of knowledge, good listening skills and the ability to weigh differing opinions on an array of issues, Kathy points out.

After graduating from Columbia, Withycombe was commissioned as an officer in the U.S. Marine Corps and trained at Quantico. The Korean War was in its second year, and he was sent as an adviser/liaison officer to the Korean Marine Corps (KMCs) to train and fight with them on the front lines for nine months.

“I will never forget my introduction to the KMCs,” Tom wrote. “As I entered the battalion headquarters bunker … the officers stood up and toasted me with the first verse of the U.S. Marine Corps Hymn in pidgin English.”

Tom and Kathy continued their friendship through correspondence during his time in Korea, and Kathy recalls the assurance she felt at the time. “We were very young and I just thought, ‘Tom can do this because this is his job.’ Looking back, I think, ‘How can any 21-year-old man have done this job?’ ”

Withycombe voluntarily extended his tour of duty for two months in Korea because the wife of one of his fellow Marines was pregnant and due to deliver soon. Tom took his place so the new father could go home for the delivery.

Tom told Kathy that even though his father had died in a car accident a month before he left for Korea, he always felt that his dad was in the foxholes with him. Tom’s father had a colorful history, working as an assayer in Alaska during the Gold Rush and breaking wild ponies in eastern Oregon before becoming a pharmacist. For several years, the family lived in Montana, where Tom learned about sawmills and lumber — knowledge that would later help him in his legal career. His father then owned a drug store in Eureka, Mont., where his mother, a former schoolteacher and “top-notch business lady,” helped run the drug store, Kathy says.

Upon his return to the United States, Tom was stationed at Camp Pendleton in California and trained for intelligence school at Fort Riley, Kansas. He returned to Camp Pendleton and learned that he had orders to Harvard Law School in order to work as an attorney in the office of the judge advocate general of the Marine Corps. He and Kathy became engaged and, shortly after, Tom learned that the program that was going to pay for his education at Harvard had been cancelled.

“My wife-to-be suggested strongly that I go to law school as a civilian,” Tom wrote. “I spent two months resigning my regular commission and getting relieved from active duty, resulting in my being almost six weeks late for law school.”

Tom and Kathy married in 1954, and he earned his law degree two years later. Having lived in several states before getting married, Tom wanted to return to Oregon where he had visited his grandmother and had fond memories of his time here. A job offer from the legislative counsel in Salem added to the allure, Kathy says.

Withycombe’s team had won the drafting competition at Harvard, and Tom was hired as deputy general counsel for the state of Oregon. He drafted bills on behalf of the Portland School District, which gained the attention of King, Miller, Anderson, Nash and Yerke. Now known as Miller Nash, the firm hired him to represent Georgia Pacific Corp., among other clients.

“Tom learned early on that he was not cut out to be a trial lawyer. What he did like was the teamwork,” Kathy says.

Kathy and Tom bought their first home and started their family, which would ultimately grow to include three sons, a daughter, a foster son and 14 grandchildren. “Tom wanted five boys so he could have a basketball team. He’s a basketball nut,” Kathy says, adding he still goes to his grandchildren’s basketball games when he can.

Within five years of Tom joining Miller Nash, Georgia Pacific established its own in-house legal department and offered him a job as counsel. He relished corporate law and, in particular, the camaraderie of working with a team of other lawyers.

“The highlight of his career was when he was hired by Georgia Pacific and he was assigned to the building products division,” Kathy says. “It was a multimillion-dollar business and it grew by an outlandish number because building products was the largest department at the time.”

Tom’s work also involved extensive travel domestically and overseas as he represented Georgia Pacific in acquisitions of other companies and property. The company relocated Tom and his family, following the headquarters’ move to Atlanta, where they lived for 13 years before returning to Oregon. In 1989, he received Georgia Pacific’s Distinguished Service Award.

“They had not given it to an attorney before so it came as a great surprise. That was really memorable for Tom,” Kathy says. “They called him the heart and soul of the company, and I thought that was pretty special.”

After 33 years with Georgia Pacific, Tom retired as deputy general counsel in 1995.

Throughout his life, Withycombe has volunteered his time to serve on several boards, including the YMCA and Boy Scout Councils in both Atlanta and Portland. He also served as an elder in the First Presbyterian Church in both cities. Kathy notes that Tom’s admiration for his grandfather likely played a role in his commitment to public service.

That commitment includes support for the Oregon Military Museum at Camp Withycombe, named in honor of former Gov. James Withycombe. Tom and Kathy have contributed financially toward a renovation currently underway at the museum. In addition, they have donated hundreds of Tom’s books to the museum, which led to the creation of the Thomas E. Withycombe Library.

The donation of books occurred as the Withycombes prepared to move from their Tigard home of 20 years to farmland the family owns near Hillsboro. They made the move in 2014, and Kathy admits she wondered how Tom, who had suffered a heart attack in 2007 and a stroke in 2008, would react to the change.

“When we first moved, Tom looked at the fireplace and the bookshelves on both sides of it and he said, ‘Whose house is this?’ and I said, ‘It’s ours, Tom. We’re on your grandfather’s farm in Hillsboro.’ He said, ‘Oh, ok,’ and he never asked again,” Kathy says. “The scenery is beautiful here, like the hills of Devon in England where Tom’s grandfather’s family lived, and it’s had a real calming effect.”

James Withycombe served as Oregon’s governor from 1914 to 1919. He died in office from a cardiac illness a decade before Tom was born. While Tom never met his grandfather, he was inspired by stories of his great patriotism and commitment to those who served during World War I, according to a tribute to the Withycombes that was published on the Oregon Herald website last year.