Exercising Discretion:
The Intersection of Morality and Ethics
By Amber Hollister 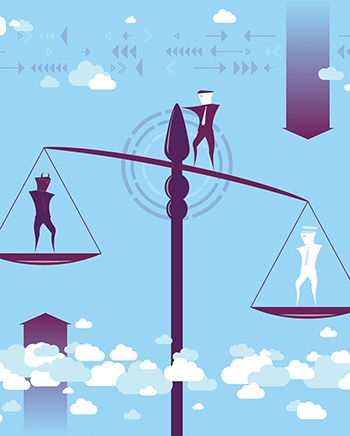 When thinking about ethics, some lawyers imagine a world of black and white, a world where decisions are straightforward and good lawyers will always serve justice and do the proverbial “right” thing.

Often, getting to the “right” decision can be a nuanced process. In many circumstances, the Oregon Rules of Professional Conduct dictate how a lawyer must act. The rules provide an ethical floor that a lawyer’s conduct may not fall below. But the rules are only a minimum regulatory requirement, not a set of aspirational goals. They do not define the ceiling of what a lawyer may strive to achieve. Because of this, the rules alone cannot replace a lawyer’s own moral code or inherent sense of professionalism. Often, when acting in compliance with the rules, a lawyer must exercise professional judgment about what is best for the client, what is just under the circumstances and what is required as a matter of professionalism. Even when lawyers comply with the Oregon Rules of Professional Conduct, they are likely to have a great deal of discretion in the path they choose.

When the rules do not dictate an outcome, a lawyer might wonder: What is the right thing to do? That is a very important question. A regular reader of disciplinary summaries in this Bulletin will note that from time to time Oregon lawyers have lost their moral compass and gone astray, with drastic consequences. Among these examples, we find lawyers who may have started out as well-respected rule-followers, but became enmeshed in injustice and fraud. How, one might ask, can such a transformation occur?

One way, perhaps, is that lawyers may fail to recognize the power of developing their own moral sense. Over time, lawyers who are more comfortable following rules than honing their moral intuition may lose touch with what actions serve justice. Given that no lawyer desires to end up on such a path, what tools are available to help us navigate thorny ethical decisions in real life when the rules do not provide a clear answer?

This very question is posed by the field of behavioral ethics, which examines how people engage in ethical decision making and studies how to improve decision-making outcomes. According to behavioral psychologists, a lawyer’s ethical decision-making process can be divided into four stages: moral awareness, moral reasoning, moral intent and moral action.1 In each stage, there is room for error. Behavioral legal ethics demonstrates that we cannot ignore that a lawyer’s own morality will inevitably be part of the decision-making process.

An exploration of the following hypothetical situation highlights the dimensions and risks of each stage of ethical decision-making, through the lens of behavioral ethics.

In a meeting with a client, Lawyer learns that Client plans to defraud his employer by taking money from an account to cover his personal vacation expenses later that week. Lawyer counsels Client against taking the funds, but Client is insistent that his employer “owes” him and he has not been adequately compensated for his hard work. Client is confident he will not be caught and feels justified in taking the money. What should Lawyer do?

Step One: Spot the Issue

At the beginning of a decision-making process, the lawyer must recognize that a situation has an ethical dimension. Often, moral awareness depends on how a person frames an issue. In the scenario above, lawyers are very likely to spot the problem created by the client’s plan to steal from his employer. While the moral dimension of this scenario is glaringly obvious, issues presented in day-to-day practice are often more subtle.

The next step of the ethical decision-making process is engaging in moral reasoning. At this stage, the lawyer must determine what course of action is ethical. For lawyers, this inquiry necessarily begins with the Oregon Rules of Professional Conduct. While the rules do not always dictate a result, they often limit the options available.2

In the scenario above, the rules point to three possible options. First, the lawyer could counsel the client to do the right thing, but remain silent. After all, “(a) lawyer’s duty to protect a client’s confidential information lies at the heart of the lawyer-client relationship.” Frease v. Glazer, 330 Or 364, 370 (2000). Lawyers have a duty to keep all information relating to the representation of the client confidential, unless the rules provide an exception. RPC 1.6(a). The client’s expressed intent to defraud his employer is confidential; likely the client is turning to the lawyer as a trusted adviser. Based on this duty of confidentiality, the lawyer might choose to counsel the client not to steal from his employer but keep the client’s confidences and continue the representation (assuming the lawyer does not assist the client with fraud or otherwise violate the rules). See RPC 1.2(c). This option has the significant benefit of ensuring that the client continues to have counsel to advise him of what the law requires and how to mitigate past mistakes.

Finally, the lawyer could consider disclosing the client’s intent to steal from the employer. RPC 1.6(b)(1) provides that a lawyer “may reveal information relating to the representation of a client to the extent the lawyer reasonably believes necessary … to disclose the intention of the lawyer’s client to commit a crime and the information necessary to prevent the crime.” The rule provides that taking this step is purely discretionary; obviously, such a drastic step must be taken with great care.3

Which answer, you may ask, is the right one? As noted above, the rules narrow the options but do not provide one answer, and neither does this article. Ultimately, the lawyer will need to exercise his or her own professional judgment to decide upon a path. This step may be demanding and uncomfortable. During the moral reasoning stage, because the rules do not dictate a specific result, the lawyer’s greater sense of moral duty and professionalism must come into play. The lawyer will have to consider the relative benefits of maintaining confidentiality and continuing to counsel the client to do the right thing, withdrawing from the representation and disclosing the client’s intent to steal to prevent the client’s future crime.

A lawyer’s moral reasoning is influenced to a great degree by the lawyer’s intuition and emotionally-based response. Because of this, studies show moral reasoning can be easily sidetracked by self-serving bias. Self-serving bias is the often unconscious tendency to “conflate what is fair with what benefits oneself.”4 For instance, if the lawyer has been a victim of employee fraud in the past, the lawyer may be more likely to discount the value of confidentiality. If a lawyer sees the client’s business as important to the lawyer’s firm, or if the lawyer sympathizes with the client’s low compensation, the lawyer may be less likely to withdraw or make a disclosure.

Combating self-serving bias is a complex task, to a large extent because it happens subconsciously. Strategies such as educating lawyers about self-serving bias and crafting systems for accountability (e.g., firm internal conflicts-of-interest policies) have some potential for reducing its impact.

At the next stage of decision-making, the lawyer must desire to act in an ethical manner. The desire to make an ethical choice must come from within and be supported by the larger legal community. Even presuming all lawyers wish to act in a moral manner, moral intent may go awry when lawyers use rationalizations to give themselves permission to act in a manner inconsistent with their own moral code. Over time, rationalization may undermine moral intent.

For instance, in the scenario above, rationalizations may distract the lawyer from developing moral intent. The lawyer may rationalize that the client does not really need the lawyer’s advice and counsel; that withdrawing from representing the client will not change the client’s course of action; or that the client’s employer is a Fortune 500 company that will not even notice the client’s fraud (“after all, the cost of one vacation is just a drop in the bucket”). Thinking about behavior from the perspective of an opposing party or colleague can help lawyers break down and recognize rationalizations. Lawyers who notice their internal dialogue is filled with euphemisms or “spin” about the impact of their decision should be wary that rationalization is at work.

A lawyer’s moral intent may also be influenced by the context of the decision. For instance, if the lawyer in the scenario is rushed, is experiencing personal stress or does not believe other lawyers will support the lawyer’s decision, the lawyer may be less likely to desire to act in an ethical manner.5 To minimize the impact of these external stressors, law firms can strive to develop firm cultures where ethical behavior is the norm, and lawyers expect firm support when faced with ethical dilemmas.

We know that people who habitually consider the ethics of their actions may be more likely to recognize an ethical quandary. On the other hand, people who are primed to focus on other goals — making money, meeting performance benchmarks or competing with peers — tend to focus on those goals to the detriment of moral awareness.6 To improve ethical decision-making, firms should encourage lawyers to keep ethics in their frame of reference. Keeping a framed copy of the Oregon State Bar’s Statement of Professionalism in the office, frequently talking with colleagues about ethical intuition and sharing stories about ethical decision-making can help lawyers to hone their moral awareness and moral intent.

A lawyer may step through each stage of the decision-making process but fail to cross the finish line. Fear and inertia are significant motivators.

When it comes to grappling with the issues and making a choice, our legal culture is paramount. If a lawyer routinely observes colleagues acting in an ethical fashion and sees that action bear fruit, the lawyer will be more likely to have the courage to take action. Lawyers place great value on how they have observed other lawyers handle similar dilemmas and whether the action taken achieved the desired result.

While the Oregon Rules of Professional Conduct play a crucial role in governing lawyer conduct, the conversation cannot stop there. Lawyers acting in compliance with the rules of professional conduct often have discretion.

Behavioral ethics provides a rough map of lawyers’ decision-making process when exercising that discretion. By focusing on how a lawyer’s personal beliefs, sense of professionalism, biases and circumstances shape decision-making, lawyers can begin to examine how they exercise discretion.

As inscribed on the temple of Apollo at Delphi, the first step to wisdom is to “know thyself.” Developing a better understanding of how to support better lawyer decision-making will only strengthen our profession.

3. See Helen Hierschbiel, “When Doing the ‘Right’ Thing May be the Wrong Thing to Do,” OSB Bulletin (August/September 2011) at www.osbar.org/publications/bulletin/11augsep/barcounsel.html.