A Lifelong Love of Learning:
Paula Barran Finds Opportunities for New Discoveries, On and Off Campus
By Melody Finnemore 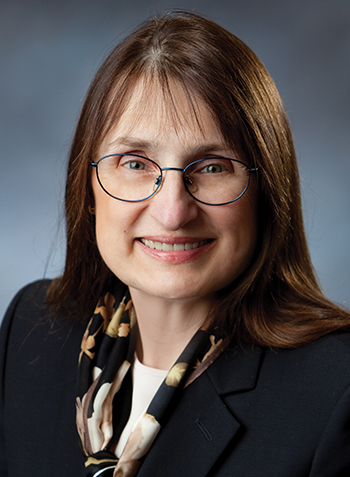 Paula Barran’s father encouraged his children to pursue higher education and careers that would fulfill them. Barran, a founding partner with Portland firm Barran Liebman, notes that the family joke is that he also forgot to tell her how to stop going to college.

The Ohio native earned a bachelor’s degree in modern languages at the College of William & Mary and a master’s degree from Cornell University. She received a Ph.D. from the University of British Columbia and, after meeting a family friend who was a lawyer and proved to be fascinating, a law degree from York University in Toronto. After establishing her legal practice, Barran earned a master’s in business administration through the University of Oregon’s Executive MBA program.

“I thought that would be an interesting way to get some structured business education,” she told the Bulletin, adding that the knowledge she gained complements her work in labor and employment law.

Among Barran’s greatest educational and legal experiences was her involvement in the Kennewick Man case. Discovered in 1996 along the Columbia River near Kennewick, Wash., the skeletal remains of an ancient human would lead Barran on a professional journey like no other. And, now in her fourth decade of legal practice, her work with universities shows she has figured out a way to keep going to college.

A Leader in Education Law

While earning her bachelor’s degree, Barran learned about a German language immersion program at Portland State University. During her stay, she fell in love with Oregon and moved here in 1980.

Not long after that Barran met Ed Harnden, who would become a close friend and fellow partner at Barran Liebman. He was quickly impressed by her adeptness at handling complex litigation early in her career.

“Paula started as an extremely mature and competent attorney. She had a doctorate before she started her practice, so she came in with a maturity level that was pretty striking in my view,” Harnden says. “She handles the firm’s most complex issues in employment and labor law.”

He also appreciates her sense of humor and her personal connection with clients.

“She views every client as almost family because she gets into the details of a case and she becomes part of their everyday being. It’s not a money issue, it’s a care issue and a desire to make sure they are extremely well protected,” Harnden says. “Her power and strength is that she looks at it as a way to protect the client because they don’t deserve to have something bad happening to them.”

“How are we in the 21st century and 20 percent of women are sexually assaulted on campus?” she asks, referring to a recent Washington Post-Kaiser Family Foundation poll that delved into the issue.

A fellow of the American Bar Association, the Litigation Counsel of America and the College of Labor and Employment Lawyers, Barran thinks her education law practice dovetails well with her employment and labor law practice. “They involve federal civil rights laws and they all work together, so it’s a symbiotic relationship.”

Among other cases, Barran served as counsel for the city of Beaverton in its litigation against Nike, which Barran says is probably the largest public records request known to date. She has represented the Port of Portland and TriMet, including in a case involving accessibility under Title II of the Americans with Disabilities Act.

A prolific writer and presenter, Barran most recently has addressed topics such as: the legalization of recreational marijuana and its impact on employers; religion, disability and accommodation; and domestic violence in the workplace. She develops and presents “train the trainer” programs for employers. In addition, she has taught at Willamette University’s College of Law and Lewis & Clark Law School as an adjunct professor.

“The joke in the office is this is my chance to get back into school. I’m guilty. I love being on campus and talking to really smart people,” Barran says.

The Battle Over Kennewick Man

The chance to engage with intelligent people and learn something new was one of the key highlights for Barran during the Kennewick Man case. She became involved in the case as several factions claimed authority over the 9,300-year-old skeleton. The U.S. Army Corps of Engineers claimed it had authority because it oversees the land where the skeleton was found. The Benton County coroner claimed he had legal rights to the remains, as did a coalition of Columbia River Basin Indian tribes, which want to rebury the skeleton.

Barran and Alan Schneider represented Douglas Owsley, an anthropologist with the Smithsonian Institution, and a group of seven other prominent scientists who wanted to study the bones. The group of plaintiffs sued the corps, the Department of the Army, the Department of the Interior and several government officials to gain access to the remains. Barran and Schneider represented the group on a pro bono basis (but with the possibility of a fee award) as the case spanned over a decade before the 9th Circuit Court of Appeals in 2004 ruled in favor of the scientists.

A 2014 Smithsonian magazine article about the discovery of Kennewick Man and the legal battle that followed said the group of scientists crafted a plan to study the remains and presented it to the corps. They were given 16 days to study the remains, and the study took place in July 2005 and February 2006.

“When you’re starting out as a young lawyer you can’t imagine working for 10 years on one case. Of course, there were other cases going on at the same time,” Barran recalls.

“For the longest time I was just terrified because this was pretty new to me at the time,” she says, adding Schneider was very knowledgeable but she was learning as she went along. “It was all really challenging but also hugely rewarding. I got to talk with super smart scientists who wanted to study it, and I got to sit in on some of the study sessions.”

She describes the study area as a bed of sand with the remains laid out on top. Barran was fascinated by how the scientists could look at the shapes and colors of the bones and determine what had happened to Kennewick Man during his lifetime.

“The bones are like a book to somebody who is trained to read them, and it came to life for me,” she says.

Earlier this year, it was announced that DNA analysis proved Kennewick Man was of Native American descent. While it is still not clear whether the U.S. Army Corps of Engineers will retain authority over the remains, researchers who conducted the DNA testing said the Confederated Tribes of the Colville Reservation appear to be the most closely related Native American tribe to Kennewick Man.

Barran provided this response from Cleone Hawkinson of Friends of America’s Past, which helped fight for scientific access to the remains:

The results are preliminary, based on two individuals in one group. We don’t have any comparative data for how many other groups might have a similar connection. There is evidence in South America for this particular gene. Sharing a common ancestor is not the same as being ancestral to someone. The K-man and the Colville individuals can only be known to share a common ancestor. How close that ancestor might be is unknown. The 9th Circuit stated clearly that a “Special and Unique Relationship” is required for repatriation. Ancient DNA is a population concept so is not useful, simply one more line of evidence. DNA doesn’t invalidate the results of the skeletal biologists’ views of affinity.

Says Barran: “I had always thought once those studies were done that there would be another attempt to return the remains. I think it will be very sad if the government decides to repatriate the remains.”

When she’s not working, Barran enjoys hiking in Central Oregon with her husband, Richard, and their dog, a Keeshond they call Dr. Poco. Barran also has been learning to play classical guitar for the last 15 years.

“I have a very patient teacher who plays like an angel. He has all these prodigies and then there’s me bringing up the rear,” she says with a laugh.