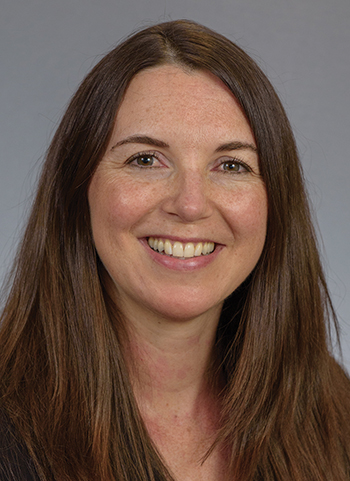 After just one conversation with Lisa Amatangel, it’s not difficult to imagine how she overcame a tragic loss at a young age and went on to build a successful career as a litigator, summit several of the world’s highest peaks and complete multiple long-distance running events. It quickly becomes clear that she is strong, determined and disciplined in her personal and professional life, and easy to laugh with during the conversation.

The youngest of five siblings, Amatangel grew up in Newton, Mass., two houses away from the Boston Marathon route she would later run. Her father was born in 1916 in Italy and had to quit school in the third grade to work full time. He moved to America and, when he wasn’t looking for work, learned English on his own at the Boston Public Library. He ultimately built a successful business as a brick mason, builder and landlord.

Amatangel’s mother finished high school and raised a family while developing the real estate business with her husband. She later went on to establish her own successful business in the Caribbean. While she didn’t have the opportunity to earn a college degree, Amatangel’s mother grew up near Tufts University, visited the campus as a young girl and talked frequently about it to Amatangel. Amatangel was accepted to the university, a fact her mother proudly shared with others just before she passed away.

“It was one of the last things she would know about me, as she died suddenly from an undiagnosed brain aneurysm just before the end of my senior year of high school. She was 52 and in otherwise great health,” Amatangel explained in an article for Tufts. “It’s forever been a happy recollection for me that she knew I was heading to Tufts that fall.”

She initially thought about studying economics in college, but felt compelled to immerse herself in something more introspective that would also allow her to read books she would enjoy. While earning her bachelor’s degree in social psychology, Amatangel played tennis for the university’s championship winning team and went undefeated in singles and doubles.

“This group of teammates and coaches would be a vital connection for me,” she said. “My doubles partner, who became a life-long friend, had suffered a tragic loss in junior high and understood the grief I was experiencing.”

Amatangel also played squash in college and held an on-campus job. As she graduated in 1993, she debated about whether to pursue an advanced degree in psychology or go to law school. She had a couple of good friends who were studying for the LSAT and her parents had been involved in a few lawsuits through their rental property business. Over the years with her family, Amatangel saw how good legal counsel could help people and how bad legal counsel could compound people’s problems.

She also knew that law school was expensive, so she joined the family business and helped run their hotel in the Caribbean. She then worked as a paralegal at a firm in Washington, D.C., to gain legal experience and insight about the practice of law while building her finances.

During her first year at Boston College Law School, Amatangel sat near Paula Mangum during several classes and the pair quickly struck up a friendship. Mangum remembers Amatangel coming to the classroom each day armed with snacks.

“By the end of a full day of classes, she had to gather up leftover pieces of bagel, banana peels, perhaps some candy and nuts. I think we shared the same stress and anxiety of trying to learn the ‘think like a lawyer’ concept, but I quickly realized that Lisa had more stamina and courage than most of us,” Mangum recalls.

“She mentioned casually that she had climbed Mount Kilimanjaro,” she adds. “She trained for and ran the Boston Marathon while still in law school. During law school breaks, she always looked for some new adventure, hiking or biking in America and Europe. By the time she climbed Mount Everest I can’t say I was surprised by her accomplishments, but I am still in awe.”

During law school, Amatangel clerked for one summer for the National Women’s Law Center in Washington, D.C., and was a summer associate in the Boston office of Hale & Dorr (now WilmerHale) After graduating in 1999, she completed a two-year clerkship for a federal judge in Rhode Island. WilmerHale colleague Beth Reilly, who worked with Amatangel in complex commercial litigation and products liability for eight years and is now a partner with the firm, says Amatangel held fast with her quiet manner and steely reserve among opponents who were aggressive and tried to be intimidating.

“Lisa had a way of putting these blowhards in their place. Without raising her voice or her heartbeat, she could wear down anyone and never seemed to let anyone get under her skin, no matter how much she was under attack,” Reilly recalls.

“Surely she brought these same traits — tremendous inner strength, stamina and self-control — to her extraordinary feats in mountain climbing,” she adds. “I know she took a measure of pride in outlasting and walking past the brash, macho types who talked a big game before a climb, but inevitably had to turn back down the mountain without reaching the top. I picture her at the summit with a very quiet, modest smile of satisfaction that success can be achieved through her more reserved, less testosterone-fueled approach.”

After leaving the firm, Amatangel spent the next three years focused on climbing mountains as part of the Seven Summits mountaineering challenge, which involves climbing the highest peak on each continent. She began in in late 2009 and finished in 2012 by summiting Mount Everest.

“One of the major things I enjoy about climbing is to be in nature and have a challenge, a great physical challenge and a mental challenge, too. Leading up to it there’s a lot of preparation and work, but there is a real simplicity to the actual act of climbing,” she told The Bulletin. “Everyone is equal setting out and it’s just a matter of who finishes.”

Amatangel joined climbing groups for all of her Seven Summit climbs. Sometimes it was just her and another climber while other times she was part of a larger team.

“The bonds formed among teammates and tentmates is one of the magical parts of climbing,” she said. “I have very dear climbing friends in many countries around the world. It’s incredible to meet for the first time on day one of the expedition, and leave two weeks or two months later with a lifelong friend.”

Her mountaineering training was complemented by a home delivery business she helped run with her sister and brother-in-law in Houston, Texas. On some days, her partnership in Espresso Ventures involved loading trucks alongside their employees and setting out on the delivery route.

“It was very different and I learned it’s a tough, physical job. Our team worked hard, long hours; it was eye opening,” she says.

As Amatangel was moving to Colorado to work as an assistant attorney general, she began dating Duane Nelson, who had been a teammate on her Everest climb and is now her husband. Nelson grew up in southwest Colorado and has lived in Oregon for 23 years. Amatangel says it didn’t take much persuasion to get her to move to the Pacific Northwest and its treasure trove of outdoor adventures.

In addition to mountaineering, Amatangel and Nelson enjoy long-distance running. Amatangel used marathons as a training tool for climbing and a way to visit cities that interested her, including Chicago, New York, San Francisco, Anchorage and Portland. After their Everest summit, Nelson invited her to a long-distance running event at the Grand Canyon and a 100K in Bryce Canyon. She would also like to try an Iron Man competition in the future.

Now in the complex tort practice group at Portland’s Cosgrave Vergeer Kester, Amatangel says her physical pursuits enhance her professional life because both require preparation, stamina and the ability to focus for long periods of time. She has put her climbing career on hold, however, because she’s expecting twins in late December or early January.

“I have to say morning sickness felt a lot like altitude sickness, so I had excellent training,” she jokes.

In addition to learning as much as possible about parenting before the twins arrive, Amatangel and Nelson enjoy kayaking, hiking, biking and cooking.

“One fact I realized recently is that I’ve visited nearly 80 countries,” Amatangel noted. “That number isn’t likely to grow very much in the next few years with twins, but we do hope to get them out on trails and traveling early and often.”