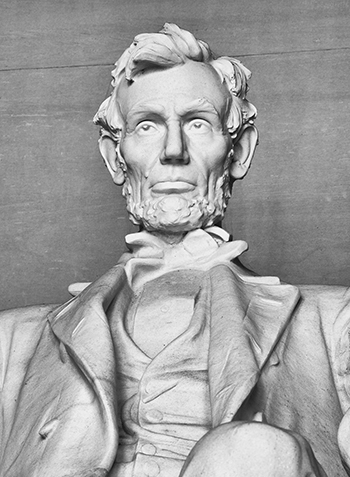 On the 150th anniversary last month of Abraham Lincoln’s death, the magazine of Illinois lawyers shared the following remembrance of Lincoln, comments from the memorial event where Illinois lawyers mourned their colleague.

On May 3, 1865, the Illinois Supreme Court held a memorial service for Abraham Lincoln at the courthouse in Ottawa, Ill. The service focused not on Lincoln the president but Lincoln the lawyer. The proceedings of the event, which appear in 37 Illinois Reports, note that the “Court Room and interior of the building were draped in mourning, and over the bench was suspended a portrait of the late President, enwreathed in evergreens and emblems of grief.” Three justices sat on the court when Lincoln was assassinated: Chief Justice P.H. Walker, Justice Sidney Breese and Justice Charles B. Lawrence.

Former Chief Justice J.D. Caton and Justice Breese both spoke at the ceremony. Here are excerpts of their remarks.

Justice J.D. Caton: … For nearly 30 years was Mr. Lincoln a member of this bar. But few of us are left who preceded him. From a very early period he assumed a high position in his profession. Without the advantage of that mental culture which is afforded by a classical education, he learned the law as a science. Nature endowed him with a philosophical mind, and he learned and appreciated the elementary principles of the law, and the reasons why they had become established as such.

He remembered well what he read, because he fully comprehended it. He understood the relations of things, and hence his deductions were rarely wrong from any given state of facts. So he applied the principles of the law to the transactions of men, with great clearness and precision.

He was a close reasoner. He reasoned by analogy, and usually enforced his views by apt illustrations. His mode of speaking was generally of a plain and unimpassioned character, and yet he was the author of some of the most beautiful and eloquent passages in our language, which if collected together would form a valuable contribution to American literature. Those who suppose Mr. Lincoln was destitute of imagination or fancy know but little of his mental endowments. In
truth, his mind overflowed with pleasing imagery.

His great reputation for integrity was well deserved. The most punctilious honor ever marked his professional and private life. He seemed entirely ignorant of the art of deception or of dissimulation. His frankness and candor were two great elements in his character which contributed to his professional success. If he discovered a weak point in his cause he frankly admitted it, and thereby prepared the mind to accept the more readily his mode of avoiding it.

I venture the assertion, that no one ever accused him of taking an underhanded or unfair advantage in the whole course of his professional career. He was equally potent before the jury as with the court. …

Justice Sidney Breese: … Not deeply read in his profession, Mr. Lincoln was never found deficient in all the knowledge requisite to present the strong points of his case to the best advantage, and by his searching analysis make clear the most intricate controversy.

He was, besides, an honest lawyer, practicing none of the chicanery of the profession to which he was devoted, nor any of those mean and little and shuffling and dishonorable arts all do not avoid; nor did he seek an advantage over his adversary to which he was not fairly entitled, by the merits of his cause, and by the force of his arguments. With an exterior by no means polished, with nothing in the outward man to captivate, there was that within him, glowing in his mind, which enabled him to impress by the force of his logic, his own clear perceptions upon the minds of those he sought to influence. He was therefore, a successful lawyer, but bore with humility the distinction he
had won.

For my single self, I have, for a quarter of a century, regarded Mr. Lincoln as the fairest lawyer I ever knew, and of a professional bearing so high-toned and honorable, as justly, and without derogating from the claims of others, entitling him to be presented to the profession as a model well worthy of the closest imitation.…

ABOUT THE AUTHOR
Special thanks to John A. Lupton, executive director and director of history programs for the Illinois Supreme Court Historic Preservation Commission, for providing copies of these remarks.

This article originally appeared in the April 2015 issue of Illinois Bar Journal and is reprinted here with permission.