An Army of One:
Remembering Ken Morrow
By Edward T. Monks 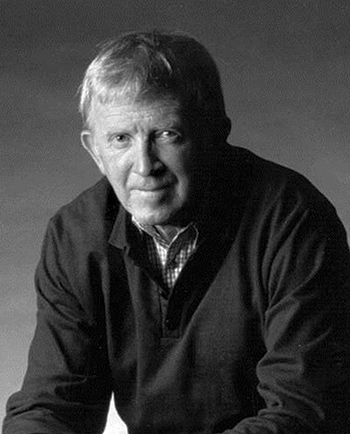 Kenneth A. Morrow was probably the greatest criminal lawyer the state of Oregon, perhaps the Pacific Northwest, has ever known. Until his death at the age of 71, Morrow was an exceptional trial advocate who accepted the most difficult cases and tried them without fear of losing.

I worked with Ken Morrow from September 1977 until November 2000, when he had his fatal heart attack while sitting at his office desk. That happened on a nontrial Monday in the middle of his defending an environmental activist accused of arson and related protest crimes. Although I handled civil matters within our firm, it was my privilege to watch and occasionally to work with Morrow on his cases. Although no one kept formal statistics, those of us who were aware of Morrow’s trial schedule put his acquittal rate at about 70 percent of tried cases. His first three death penalty cases were outright “not guilty” verdicts on all charges. I have seen a Linn County jury acquit Morrow’s client with less than a half-hour deliberation of all robbery-kidnapping charges, after the D.A. who prosecuted the case told me just before trial that his opinion was that there was a 100 percent chance of conviction. There are many similar examples.

My purpose here is to share my observations of a unique individual with a varied set of skills, both natural and acquired, which translated into favorable outcomes for his clients. I do this for whatever usefulness others may find in them. I should mention the obvious: that there is no one way to be a successful trial attorney any more than there is one way to be an acclaimed novelist, a skilled actor or an accomplished painter.

First, Ken Morrow had a great memory. He would read carefully, for instance a police report, paying attention to the literal meaning of individual words, as well as the more generally understood meaning of collections of words. Morrow intently listened to testimony in a similar way. Remembering asserted details in both a literal way and in a more popularly understood way allowed him to cross examine a witness in either realm.

Beyond great recall, Morrow had the capacity to retain multiple facts simultaneously with a recognition of their interrelationship or possible interrelationships in ways that produce a coherent whole. He would see and retain various possibilities in the way a chess player understands that a certain move can have multiple effects later in the match. Although Morrow might have had a factual theory for the case, he was not blinded by it. He was sufficiently adaptable and open-minded to work with the evidence presented, not the evidence he thought would be presented. For Morrow, listening and responding to what the jury heard was far more important than operating from a prepared list of questions. He would generally develop a thorough list of areas of inquiry for each witness, but not create a detailed list of specific questions for each witness. I think he shunned the potentially constricting thought process that derives from adherence to a prepared list. What was going on in front of him was important. That is what the jurors saw and heard. That is what they would base their decision on. Attention to what the jury was hearing and seeing allowed Morrow to address what he believed could have an effect in the case. He would proceed as slowly as needed, unconcerned if anyone might find the silence awkward.

Second, Morrow had an approach, maybe a product of growing up in Kansas, or maybe absorbed from his parents both of whom were educators, or maybe from reflection and calculation on his part, which treated people (even the primary complainant) with a measure of respect even while his questions discredited every sliver of their testimony. It was a subtle but important trait as Morrow’s approach created space for jurors to have a positive reaction to some aspect of a witness while disbelieving every relevant word they spoke. When questioning one police officer, he generally would not take on all of law enforcement or everything that officer has ever done, but he would thoroughly scrutinize and by implication criticize that officer’s testimony/observations on the day in question. In general, the idea was to leave the witness with some dignity and allow the jurors some degree of positive feelings toward the witness, but demonstrate every flaw in the testimony. That style, coupled with a developed sense for what jurors were thinking and feeling, allowed Morrow to serve his client’s interest.

Morrow handled many cases in which the defendant was accused of sexual crimes against a child. Understanding the capacity of children to confuse fact and fiction, to have adults plant suggestions that grow into memories, to blur reality and imagination, Morrow — also aware of the mischief that parents frequently create in divorce/custody matters — could approach a child with obvious disbelief in the trustworthiness of his or her story, accompanied by an obvious acceptance of the fact they were vulnerable children, who themselves might not even understand the consequences of their words. When Morrow dealt with children as witnesses, there was no confusion about his commitment to his client’s interests, but that commitment was accompanied by recognition of the child’s humanity. My sense is Morrow was as good at that approach as anyone who has ever been involved in the legal process.

Just as noteworthy, there was an “I never quit” attitude in his approach to a case. In a trial, every lawyer is faced with hundreds of decisions: what question to ask, what to avoid asking, when to object, etc. Mistakes are inevitable. I, as a new lawyer, even recognized times Morrow made mistakes. I recall once during cross examination of a witness Morrow had already uncovered fabrications and inconsistencies. The testimony was in a favorable place for Morrow’s client, when he asked one more question that called upon the witness to directly disavow all he had said on direct. The witness balked and used his answer to partially rehabilitate himself. Morrow could not hide his reaction as his ruddy complexion quickly reddened. He knew he’d made a mistake. The jury knew from his complexion that something had happened. But he just kept on going. No handwringing over mistakes, no self-recriminations, no time wasted. He worked right through the imperfect moments. He was there to win the case, not be preoccupied with how he appeared.

Also, Morrow had a refuge, a place of renewal. That was his wife, Joy, and the home they created and shared with their sons. That refuge helped him be a successful trial lawyer. He renewed quickly, even at age 71. An example of the importance of wife and home: It was the early 1980s. We were representing about 20 herbicide protesters who were accused of criminal trespass on timberland in Lincoln County. Morrow flew in to Eugene late in the afternoon on the Sunday before trial after 10 days in Hawaii with a large group of friends and family. Trial was to start on Monday morning. On Sunday evening, we drove to Newport to have a pre-trial meeting with the clients. The meeting ended after 9 p.m. We had already checked in to the motel for the trial which was scheduled for a week. It is about a two-and-a-half hour ride back to Eugene. Rather than stay in Newport, Morrow drove home in the dark and returned in the dark early the next morning. Although he never stated it, it was clear to me he needed to be at home with his wife as a way for him to be in the right mental place. The love, the connection to family and comfort of the family home outweighed five fewer hours sleep on the eve of a trial. Not every trial lawyer will be blessed with such a family life, but every trial lawyer needs a place to renew.

Being a trial lawyer was integrated into Morrow’s life. Trials were not unnatural events superimposed upon his existence. They were a comfortable part of his existence, which is probably why he much preferred trials that would allow him to be at home. When trial recessed at the end of a fall day, he would head immediately to his fourth-grade football team’s practice and immerse himself in it. It was another form of relaxation that allowed him to later return to the case refreshed with an enhanced ability to see. Even at the office, Morrow would commiserate with long-time partner Bob McCrea, another outstanding criminal trial attorney cut from a similar cloth. Morrow’s approach to life and to trial was essentially healthy in that he lived in the present.

When I asked our longtime law partner, Bill Sharp, his opinion as to Morrow’s greatest trial asset, without hesitation Sharp’s response was, “Listening.” Sharp explained that, in a nontrial setting, Morrow would look a person in the eyes, be focused on them and listen carefully to what they said. He had the capacity to make people feel they were the only person in the world for the moments they were together. Morrow smoothly transferred that trait to the courtroom, carefully listening to testimony and placing it in the context of the whole case. Sharp also emphasized that Morrow did not get mentally tired. Testimony at 4:45 p.m. got the same scrutiny that testimony at 9:05 a.m. did. He was more the long distance runner than the sprinter.

Last, Morrow had the courage to take virtually any case to trial. Lawyers frequently have a fear of losing. If Ken Morrow had such fear, I never saw it and it certainly never got in the way of how he handled a case. He could walk into the Douglas County Courthouse and successfully represent two black football players, outsiders to Douglas County, charged with raping a white local girl. In some of Morrow’s death-penalty cases, there were entire litigation teams on the other side. It was just Morrow with his handwritten notes and a great memory, a little like a one-man army.

My observation is that, although there are some exceptions, most successful trial attorneys have the ability to see generally some good in their opponents in even the most contentious matters. For instance, I observed Morrow in hard-fought battles with Lane County prosecutor Joe Kosydar. When Kosydar passed away unexpectedly at a young age, Morrow was deeply affected. If there had been any residue of hostility over battles previously fought, it evaporated instantly. Morrow respected and liked Kosydar and had no problem with the world knowing that. Morrow did not forfeit his humanity in his lawyering. Jurors sensed that and were consciously and unconsciously drawn to it. Add the combination of great memory, listening skills, ability to see the whole picture and the courage to risk losing, along with the good fortune of a healthy relationship with wife and home, all combined to produce a great lawyer. If you were in trouble, if the awesome power of the state was directed against you, you could not have been in better hands.

ABOUT THE AUTHOR
Edward T. Monks, currently inactive, has been a member of the Oregon State Bar since 1977. He can be reached atedward tmonks@msn.com .