A Worthwhile Skill:
The Upside of Diagramming Sentences
By Elizabeth Ruiz Frost 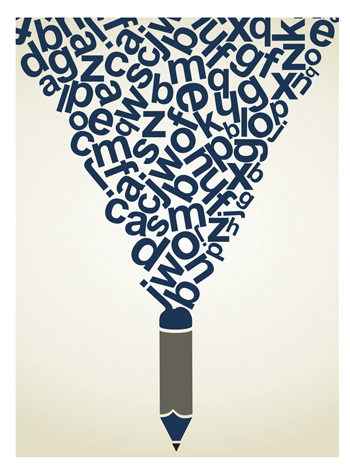 My grandmother always took a keen interest in my work as a legal writing teacher. She taught English for many years. So at the beginning of each school year she’d ask me whether kids could still write. (Anyone under the age of 75 was a kid to my grandmother.) “Yes,” I’d reassure her, “they can still write.” She’d mull that over and ask wistfully, “Do you think they know how to diagram a sentence? You know, kids don’t learn that in school anymore.” I’d grin. “I don’t know, Grandma. That’s not exactly what I teach. My class is really about legal analysis and…”

Each time we had this conversation, I’d cross my fingers, hoping I could successfully route the conversation away from diagramming sentences because, quite honestly, I had no idea how to diagram a sentence. I certainly didn’t want her to know that. Her own flesh and blood! So this month, to absolve my shame, I finally learned how to do it.

Diagramming a sentence requires a writer to identify each of the parts of speech in the sentence. When learning to diagram a sentence, it helps to start with the simplest sentence imaginable: a verb and a noun. To diagram that, graphically separate the noun from the verb, keeping the noun on the left and the verb on the right with a vertical line between them.

Note, the verb can be in a simple tense like write or wrote, or it can be expressed as a verb phrase in present or past progressive, like was writing. Either way, the verb would stay together in a single unit.

If that main sentence contained an adjective or an adverb, it would get recorded in a drop-down line, directly under the word it modified. If two words happened to modify the same part of the main sentence, they should be listed together under the word they modify in the order they’d appear in the original sentence. Here’s how the sentence “Ethical lawyers competently provide legal services to clients.” is diagrammed: 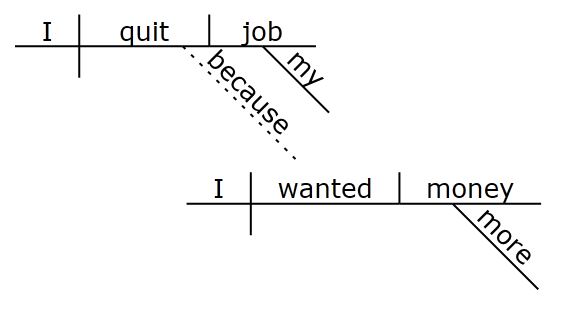 Sentences with multiple subjects or objects are signaled by bifurcating them. Once you’ve split the sentences into their bifurcated parts, each part can be diagrammed. Here are a couple simple examples: 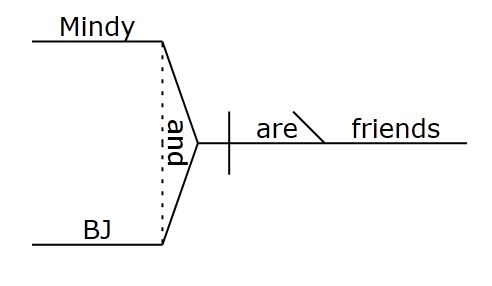 Compound subjects and objects: Mindy and B.J. are friends and comedy writers. 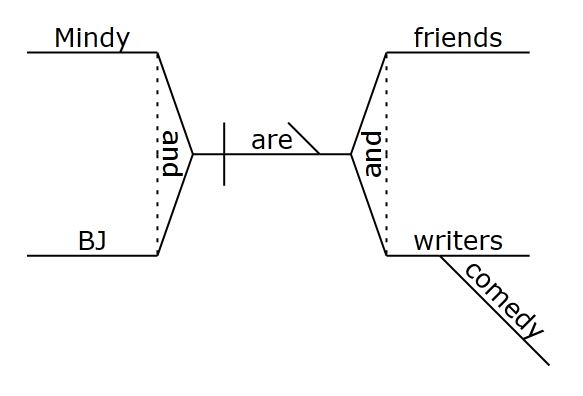 As sentences become more complicated, so would the diagram. We’ve only considered a few of the most basic structures. Based on these principles, one could diagram a more complicated sentence using the same methodology: Look for the subject and verb first, then work outward from there, determining the function of each word or phrase and the parts of the sentence they modify.

OK, so a sentence can be pulled apart and put back together in an unreadable order with horizontal lines, vertical lines, diagonal lines and dotted lines. But to what end? Can diagramming a sentence make a person a better writer? Originally, the concept of sentence diagramming was developed as a visual way to teach and understand the parts of speech. In the late 19th century, Brainerd Kellogg and Alonzo Reed developed the modern-day sentence diagram, which was widely used to teach grammar in American schools for a century. It eventually fell out of fashion, and numerous studies have suggested that rote grammar lessons like sentence diagramming do little to improve speech and writing.

Nevertheless, proponents of diagramming theorized that cutting a sentence up into its component parts would make it easier to learn the function and place of each part. One can imagine that for a visual or spatial learner, grammar might come alive through diagramming in a way it never would by simply reading a writing text like the Chicago Manual of Style. But more broadly, sentence diagramming requires us to think about what words are and how they work together. If we spend time really thinking about how words work, perhaps we’re more likely to use them correctly.

Whether or not sentence diagramming can save the English language, as my grandmother believed it could, it’s not a bad little puzzle to play. Once I started thinking about how sentences would pull apart into a diagram, I’ll confess I felt a sort of nerdy excitement when I’d read a really, really complicated sentence. “Ooooh,” I’d wonder, “how’s that going to look in a diagram?!” I don’t know that this new skill will make me a better writer — or granddaughter — but at the very least, it’ll be a good way to pass a few minutes in an airport.

Elizabeth Ruiz Frost teaching legal research and writing and other courses at the University of Oregon School of Law. She wrote this for her grandmother, who recently passed away. And now the kids know how to diagram a sentence.

1. An object is a word or phrase (acting as a noun or pronoun) that is affected by a verb or preposition.

2. A linking verb does not express action; it links the subject to other information about the subject in the sentence. Some verbs are always linking verbs, like be, become and seem. But some verbs that are otherwise action verbs become linking verbs when they serve a linking purpose. Grow, appear, remain, smell, sound, taste, feel, look and turn can all be linking verbs. You’ll know it’s acting as a linking verb if it can be replaced be some version of to be without creating confusion. Let’s use feel as an example.

Compare “I felt ready for a vacation” with “I felt a chinchilla the other day.” In the former example, replacing felt with was works. “I was ready for a vacation” sounds just fine. So felt is a linking verb in that sentence. But in the latter example, replacing feltwith was does not work quite so well. Writing “I was a chinchilla the other day” is not so logical, so felt was an action verb in that sentence.