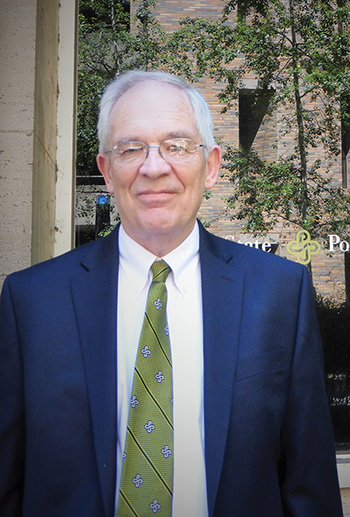 In the age of marketing and advertising we live in, humility is not a word often encountered or much lauded — even for lawyers who are mostly late to the self-promotion game. But Dick Slottee has it in spades. Despite his extensive resume and many accomplishments, his modesty is refreshing in a world of blogs, social media and constant Internet presence. The man is actually physically present. He was politely and attentively present during our interview. He was actively and intensely present for the more than 3,000 students who went through the Lewis & Clark Legal Clinic that he directed for most of his legal career. And even now, he is still curious and inquisitively present at the Portland State University Student Legal Services that he manages, helping students solve legal problems that might otherwise seem insurmountable to them.

Slottee is perhaps best known for his work at the Lewis & Clark Legal Clinic, where he served as the director from 1978 to 2014. The law school closed the legal clinic at the end of 2014 due to budgetary reasons, to much outcry but no avail. As many attorneys are aware, the legal clinic taught practical lawyering skills to law students by representing low-income clients without charge. It was based in downtown Portland and staffed by a full-time clinical faculty, who supervised between 30 and 40 students each semester, serving thousands of clients over the years, primarily in the areas of domestic violence, housing, low-income taxpayer disputes with the IRS, and consumer and bankruptcy cases — Slottee’s specialty.

Throughout the years and through his dedication to the clinic, he earned the respect of his coworkers. According to Mark Peterson, a clinical professor of law who worked at the clinic from 1987 through 2014, “Dick ended up with talented staff. Good people were attracted to the clinic and Dick was willing to listen to ideas and to experiment and try things. That’s why the product in 2014 was much better than in 1987 (when I came to the clinic).”

The “product” was in fact a unique concept. Unlike most law school clinics, the one at Lewis & Clark had a smallcase focus. First, that meant that students could handle most of the work, rather than simply watch it being done by more experienced lawyers. Second, cases could move quickly within a semester, so students could see them through from beginning to end. Says Peterson, “The students were like associates at a firm. They would have a mixture of experiences. They would work with different mentors, use different skills and handle different case types. We ran the clinic as a law firm.”

One of Slottee’s best memories? Watching students do their very first interviews. In the last 10 years, the clinic installed a one-way window/mirror so the instructors and the other students could observe the interview from an adjacent room, and the interview was recorded. The clients knew about it, but the interview was much less distracting with only the one student interviewer present in the room. The recorded interview would be downloaded to the clinic’s computer, and the student would watch the video and complete a self-critique on how he or she could improve. The students started out so nervous, Slottee recalled. But the technology allowed them much greater opportunity to improve with feedback.

Another memory he speaks fondly of was before the 9th U.S. Circuit Court of Appeals at Pioneer Courthouse. Slottee loves that students had the opportunity to argue the federal appellate cases and that the judges were friendly with them. One time the student who was arguing the case had no jacket, because he couldn’t afford one. Since they were only a few blocks from the office, Slottee was able to run back to the office and give him one to wear. It is no doubt at least in part gestures like those that earned him the students’ widespread admiration and respect. According to Peterson, “Former students almost invariably volunteer that the clinic was their single most valuable experience in law school.”

One of those former students is Portland attorney Ron Cheng, who recalls Slottee working long hours alongside the students, lending ideas, support and guidance in one-on-one conversations. “He would go around the office checking in on us, just seeing how we were doing.” It was not only Slottee’s commitment and dedication to the students and the clients they served that left an impression on Cheng, but also his philosophy about work: “Do something you love; if you do something just for the money, you’ll never be happy,” Cheng remembers Slottee saying to him. That wisdom has stuck with him and informed his career choices.

The formative factors in Slottee’s own life that led him to choose a legal education and career can be traced to Prine-ville. Although he grew up in Northeast Portland, his uncle was an attorney in Prineville, where Slottee spent a lot of time. His uncle was the biggest influence in his decision to become a lawyer. There were no other lawyers in the family at that time. His uncle even offered him a job in Prineville at his firm after he graduated.

He distinctly recalls his own first day of class in law school. His professor asked them to close their textbooks and to recite the name of the publisher. He also made them pronounce the words demurrer and error. Slottee’s teaching and supervisory styles were directly impacted by his early law school experiences. “Team effort,” he calls it. In the clinic, everyone went on a first-name basis — no “sir” or “ma’am.” He considered it his job as a law professor not to embarrass people so that they remembered it 20 years later. He also didn’t consider himself the only expert in the room: “Students have life experiences to share with each other. And they are also the ultimate consumers of the student experience.”

His collaborative and supportive style has perhaps resulted in members of his family following his professional lead. Slottee’s older daughter is studying for the bar exam, and his younger daughter is taking the LSAT. His younger daughter wants to work in social justice. He is concerned about her, though: “How are you going to make a living doing that?” I quietly remind him that he has spent his entire career doing essentially that. He smiles.

Was he ever tempted to leave, I ask, to go into private practice or do something different? No, never, is the immediate and adamant response. In addition to the groundbreaking work at the legal clinic, he relished the opportunity to do other bar-related work, like present CLEs for fun. He was a founder of the OSB Consumer Law Section. For many years, he also has been the bar’s volunteer editor (and author) of a variety of consumer law and bankruptcy materials made available to the public online, some of which is given out as pamphlets by the bankruptcy court. He thought that if he had to worry about the billable hour, he wouldn’t have the chance to do as much of these activities as he wanted. At first, he just volunteered to do what no one else wanted to do, which eventually evolved into his considerable expertise in consumer law and consumer bankruptcy issues.

Despite his tireless work in securing numerous grants for the clinic, Slottee knew it was an expensive program to run. But the decision to close it, he says, came as a surprise. He and some of the other legal clinic faculty were called to a meeting with the law school dean and the college’s general counsel, which was “not a good sign.” Mark Peterson recalls getting a call from him after the decision was announced. He says Slottee was devastated. As Slottee himself thought, “It’s your whole professional career. You’ve spent more time here than at home. What are you going to do?” He also thought about all his former students, most of whom still remember him by name.

When I ask him to reflect on the biggest loss of the legal clinic, he considers, for a moment, all the stakeholders. For him, it’s not interacting with the law students anymore. For the students, it’s no more practical skills education. And for the community, it’s that the clinic took the cases that no one else wanted. “They somehow found their way to us.” OSB Legal Opportunities Coordinator Theresa Wright would agree. A Lewis & Clark clinical professor working with Slottee since 1990, she thinks the clinic’s most significant accomplishments — and what Slottee is likely proudest of — would be the number of students “that we turned into incredibly competent, ethical lawyers and also the relationships developed with the community, courts and social service agencies under his supervision.”

Did he ever consider just retiring — calling it a day after a long career of service? No, he says, at least not for very long. Retirement was fun for about a week, and then he got bored. He applied for his current job as director of the Portland State University Student Legal Services (SLS), and was selected from among a considerable field of applicants. Funded by student fees and staffed by law school law clerks, PSU student interns, paralegals and other administrative staff all overseen by Slottee, the department helps Portland State students with their personal legal issues in a number of areas: bankruptcy; consumer law; criminal law; employment; family law; immigration; landlord-tenant; personal injury; small claims; and traffic violations. While the student body population differs from the low-income community served at the Lewis & Clark Legal Clinic, the department is providing another kind of access to justice: enabling students to remain enrolled in and focused on school while receiving legal help for problems that might otherwise have the potential to interfere with or even derail their education.

I ask him how he has found the transition to his new job, and he is quick to mention the many resources for students and the university’s focus on their success. He is also enjoying the opportunity to work with nonlawyers: “It’s a relaxed atmosphere. People are open and enthusiastic about what they do.” He says it reminds him a lot of the early days of the legal clinic, where they had a chance to develop the program to fit with their vision. “Because everyone at Student Legal Services is new, or kind of new, we can mold the program and make some changes to make it even better. And everyone is on board. That is fun.”

Slottee also mentions roundtable discussions with the directors of other PSU programs — and the world of PSU happening right outside the door — as new experiences he is enjoying. He talks about “Explore the Law,” a yearlong program run by SLS for PSU students traditionally underrepresented in law schools to try to determine whether law school is something they might be interested in. “We work with the state bar, the Multnomah Bar Association and other organizations,” he said, to hold events such as brunch with a lawyer, tours of the courthouses, social gatherings with judges, training on personal statements and so on. The students don’t receive academic credit, but 14 students recently attended a “graduation” ceremony held for them, complete with certificates. “Some of the students brought a parent. They were so proud.”

He is resistant about reviewing his life so far, but I remind him that one can take stock at any point. He pauses. I wait, thinking he will mention something specific about the clinic. But his life’s greatest motivation is best summed up by Slottee this way: “It’s not about how much money you made, or how many articles you wrote or CLEs you presented or cases you took. It’s whether you’ve done something that makes a difference in people’s lives. That’s what it’s about.”

ABOUT THE AUTHOR
Tanya Hanson is an Oregon lawyer and writer. She is the co-author of The New What Can You Do with a Law Degree? (LawyerAvenue Press: Seattle, 2012).