A Call to Action:
For Sonya Fischer, Grief Fuels Passion for Protecting the Most Vulnerable
By Melody Finnemore 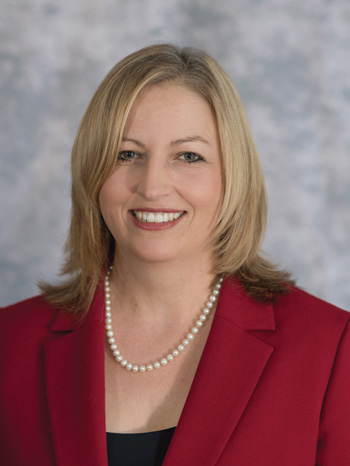 “Sonya Fischer learned early on that life can be cruel, particularly for people with mental or physical disabilities. When she was 12, her 15-year-old brother Bradley smoked a joint laced with PCP that resulted in a drug-induced psychosis that he never recovered from. Fischer recalls visiting her brother at Mac­Laren and Hillcrest youth correctional facilities and, lastly, at Dammasch State Hospital.

“Visiting my brother at the mental hospital was horrifying. People were staring into space while sitting on plastic chairs, and others were rocking back and forth aimlessly. My brother was shaking and unable to form a sentence due to the effects of the drugs he was forced to take,” she says. “I developed a sense of compassion for people with vulnerabilities that still ignites a fire inside of me.”

Fischer decided at that period of her life that she would become an attorney and work for social change. That decision was reaffirmed when, at the age of 19, she gave birth to her daughter, Christine, who was born with severe developmental disabilities.

“I was grieving over all the things Christine would never do because she would basically always have the capacity of a baby. I went through a process of creating a whole different set of values of what is important,” she says. “Giving and receiving love is much more important than any of the traditional pursuits we value in life. That process was really tough, but when I got through it I had a vision for how I wanted to help other people.”

While earning a bachelor’s degree in sociology social work at Warner Pacific College, Fischer organized parents of children with disabilities to secure important early intervention services. When she graduated in 1988, she was hired by Multnomah County to assist families of children with disabilities in accessing services. She later facilitated planning and delivery of services for early childhood education, domestic violence and homeless youth.

In 1991, while completing her master’s degree in public administration at Portland State University, Fischer began working as an intern for the late Sen. Frank Roberts, where she spearheaded new disability parking permit legislation. Fischer calls Roberts an invaluable mentor who contributed to her understanding of the legislative process that complements her work as an attorney.

“That comprehensive view of the entire spectrum about how policy is created and implemented is very helpful,” she notes.

Fischer’s 13 years in Salem included working on projects for the Oregon Council on Developmental Disabilities, where she was instrumental in a grassroots effort to close the Fairview Training Center, a widely criticized Salem institution for people with developmental disabilities. She also helped create a system of in-home supports for children with severe disabilities, and aided in the passage of legislation making it possible for children with disabilities to continue attending the same school when living temporarily outside of their parents’ home.

As legislative staff to Sen. Frank Shields, Fischer developed a package of early childhood legislation that resulted in a statewide childcare provider training program which incorporated the importance of healthy brain development for young children. Fischer also served as the director for state and federal legislative affairs for the Oregon Department of Human Services in 2010-11, during the worst economic downturn in the state’s history.

“Working with legislators and advocates to minimize the impacts of a fiscal crisis was incredibly challenging and meaningful work,” she says.

A member of the bar since 2003, Fischer now practices family law at Yates, Matthews & Eaton in Portland. She says the majority of her practice continues to involve a special needs component, whether it is a child with a disability or parents who face mental or physical challenges. Fischer is able to combine her legal expertise with her understanding of education and social service delivery systems to help create strategies for her clients.

“Currently, my personal focus is on creating and sustaining in-home supports for children with disabilities,” Fischer says, noting her family went through a difficult period when Christine was 8 years old and her daughter was placed outside of her home. “I hit the breaking point and there were no options 21 years ago. I have lived the last 20 years fighting to make all that pain count for something.”

A recent victory for families with disabled children is the Affordable Care Act’s creation of a community choice waiver that allows families to have their children with disabilities assessed so in-home services are based on their individual needs.

“This is a huge change. The system is no longer crisis driven. People can ask for help and they get help. Every child gets an assessment and it’s not based on family income. It’s pretty remarkable,” Fischer says. “Families shouldn’t ever have to get to a breaking point.”

She and other advocates are now working on how to maintain the new system so that it supports individuals, isn’t too bureaucratic and is financially sustainable. This includes working with state and local agencies as well as educating legislators about the importance of this improved support system for families of children with disabilities, Fischer says.

In addition to her practice and advocacy work, Fischer is a member of the board of governors for the Oregon Trial Lawyers Association, where she serves as co-chair of the education committee. She is former president of Clackamas Women Lawyers and a member of Oregon Women Lawyers. She serves on the board of Disability Rights Oregon. She is past secretary of the Clackamas County Bar Association and chaired the policy committee for Fact: Family and Community Together. She also has served on the Oregon State Bar House of Delegates.

In her time away from work, Fischer enjoys art, music and theater through Stumptown Stages, where her husband Kirk Mouser is executive artistic director. The couple also likes to hike and spend time outdoors. Christine is now 29 and has a sister Joy, 26, and a brother, Nathan, 18. And with Joy and her husband expecting their first baby in March, Fischer says she is very excited about the prospect of becoming a grandma.