The Unemployment Line
By Ronald Talney 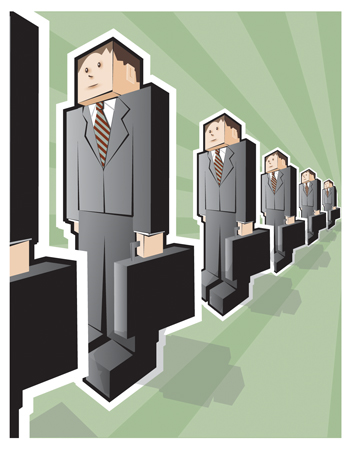 In 1962, I was a night law student and had taken a day job with the Oregon Unemployment Compensation Commission to support my family. I processed claims. We were housed in the state office building in the downtown area, at S.W. Fourth Avenue and Columbia Street, on the ground floor. The building is now privately owned, and the site of our office is now a physical fitness club. Sweating young professionals work out on treadmills and stationary bikes while looking out onto the street watching the world pass by.

In those days the world that passed by was peopled by the unemployed. The lines at the unemployment office were long and steady. From 8 a.m. to 5 p.m., the parade of the desperate was unending. My job was to stand behind a long green metal counter, similar to a bank teller’s station, but far more utilitarian looking, and wait on those poor souls as they came in to claim their checks. In those days, claimants had to personally appear each week. The top weekly benefit was $40. For most folks, it was less. The maximum period of payment was normally 26 weeks, but the federal government had enacted an emergency supplement of an additional 13 weeks. After that, there was nothing.

As claimants approached the window to receive a check for the previous week, they were required to answer a set of questions relating to their continued qualifications for benefits. Any slip in their answers meant they were routed to claims adjusters for further inquiry, where their wait would be even longer and they might be denied ongoing benefits. They must have been actively seeking work in the prior week and able and available for work the entire week. Even to this day I can recite the interrogation litany in my sleep. Any failure to meet these basic requirements meant no payment for that week. We knew that. So did the claimants. This monotonous script was recited throughout the day, echoing off the walls of the large, open space of the office with a constant drone. There was little time for pleasantries. No time to connect as human beings. The claims processers were overworked and often performed like robots. There were about 15 of us at any one time, arranged to receive the clients alphabetically, with long lines in front of each of us from morning until quitting time. Some processers became surly, and some were downright mean. For some, any excuse would suffice to send a desperate claimant to the adjusters.

One late December day, just before Christmas, around 2 p.m, a man slowly worked his way up the line to my window. A woman was with him. Like most of the others, they were poorly dressed, despite the weather. The man’s skin was a pale, grayish color, set against the craggy stubble on his face, the dark hollows of his eyes, deep-set, tired and blank. As he finally stood before me, I asked him the proscribed questions, which he answered in a weak monotone voice, nodding his head, the woman standing anxiously at his side. He appeared ill, but I ignored his symptoms and slid the voucher across for him to sign, certifying his eligibility. As he was signing his name his face suddenly clenched in pain and he began to slowly collapse. His companion, clearly desperate for the check I was holding in my hand, grabbed his hand and held his body against the countertop long enough to complete his signature. Then he fell. She grabbed the check from me as I turned and yelled for my supervisor to call for aid. The man died there on the floor, a crowd of claimants standing, watching, some visibly upset that the movement of the line had been delayed.

At the time, I thought the woman heartless and uncaring. To be more concerned about a $40 check than her companion’s final moments struck me as incomprehensible. I later came to understand, however, that her circumstances dictated that she could not respond to his death as others might or I might have thought appropriate. She very likely had children at home dependent on that check. She could not risk that I might take advantage of his collapse to deny him his check. That the family’s only source of income might be taken from her if she failed to act. Such was the desperation of the times.

I think back on that event as we recently found ourselves again deep in recession with unemployment at historic highs. I wonder again how many desperate people were lining up, cut off from their most basic human instincts of caring for one another, even sometimes in the final moments of loved ones, by a fear of being left with nothing.

Even now, I still see that woman’s hand clutching his dying hand, signing that check.