Quite an Odyssey:
Hermiston's George Anderson Shares Perspective from Four Decades of Practice
By Melody Finnemore 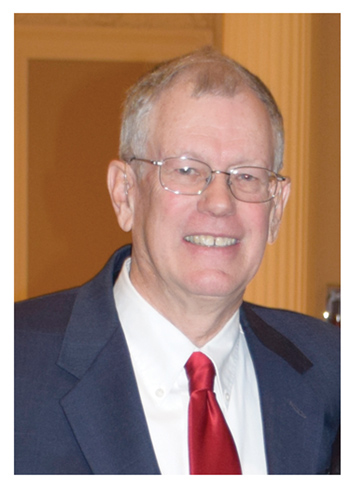 In almost 40 years of practicing law, George Anderson has witnessed just about every type of case an attorney could experience. He worked full time for over three years as a legal assistant and law clerk at a large firm in Portland, clerked for four months for a circuit court judge and then established a practice in Hermiston. He has evolved with the technologies that brought a sea change to the practice of law. And, throughout his professional journey, he has maintained his passion for helping people and pursuing justice as the keystone of his practice.

Anderson, who in December received the Oregon State Bar President’s Special Award of Appreciation, initially intended to become a history professor. His father was an immigration officer, and Anderson grew up in northeastern Washington near the Canadian border and in Tacoma. Anderson received a bachelor’s degree in history at Whitman College in Walla Walla, Wash., and was earning his master’s from the University of Oregon when the Vietnam War dramatically changed his perspective.

“You are thrust out into the world and hard life, and the world of teaching and history is a cloistered affair. And I’m sort of a combative person,” says Anderson, who received a Bronze Star for his service. “I thought I could make a difference in society and in people’s lives by becoming a lawyer. I have a saying: ‘I don’t think I could have ever found anything that I liked to do better or that I was better at.’ ”

“Sally saved me from a real property exam that I wasn’t quite ready for,” he says.

In the summer of 1975, Davies Biggs gave Anderson a leave of absence to explore a career opportunity in Pendleton. In January 1977, he established his own firm in Hermiston, which is now called Anderson Hensell. The name reflects the fact that his daughter Sally Anderson-Hensell is his partner; his other daughter, Beth, a Missouri attorney, will join the firm after she passes the Oregon bar exam. As Anderson describes his experience since he hung up his shingle, “It’s been quite an odyssey.”

Anderson notes that when he started his practice, Portland was too far away and people needing legal representation had to go to local lawyers. “Being a small town lawyer means you have to do everything, from litigation to transactions and criminal defense to tort litigation. And the schedules never mesh,” he says, adding that for nearly three decades he consistently had trials scheduled during the Christmas holidays.

The dearth of attorneys was compounded by the lack of overnight shipping, fax machines, Internet and other technology we take for granted today. Anderson recalls that when documents needed to be delivered to Portland quickly, they were put on a Greyhound bus and someone would retrieve them at the station downtown. The lack of phone and video conferencing meant Anderson racked up plenty of miles on his car driving to Pendleton, Heppner and other nearby towns for legal proceedings, sometimes twice a day.

The “communication revolution” has been a tremendous boon. “We practice instantaneous law now through email,” he says.

Soon after establishing his practice, Anderson became involved in bar activities that were primarily centered in Pendleton or Portland. But he wanted to serve his local community, specifically through public service and economic development. His civic involvement includes serving on the county planning commission, the local school board, the community college board, the local development corporation, the governor’s regional strategies committees, the Umatilla Army Depot Reuse Committee and the Eastern Oregon Trade and Event Center Steering Committee.

“Three years ago, I was appointed to the city council to assist the mayor and council in countering an unfair recall and other attacks by a disgruntled group and an irresponsible newspaper editor,” Anderson recalled, adding:

While assisting them, I advised they were out of touch with large segments of the town — especially our 35 percent Hispanic/Latino community. I recommended they appoint an Hispanic Advisory Committee to advise it on Hispanic affairs and to provide a voice for our large Hispanic population. To its credit, the council formed that group with me as its liaison, and has supported it ever since. It has improved Anglo-Hispanic relations in the town to a marked degree. It also helped a major group feel recognized as a valued part of our farming community.

Tom Kranovich, who served as the bar’s president in 2014, met Anderson in the midst of his efforts to promote diversity in eastern Oregon and the backlash that has accompanied this effort. The pair was working on a trial together when Kranovich traveled to Hermiston for depositions and attended one of the advisory committee meetings.

“It amazed me that someone in a small town, with a limited number of lawyers, would go out on a limb to promote civic involvement by a minority community,” Kranovich says. “I was also amazed that people I’m used to seeing in the shadows came into the light to promote their community and make the community stronger as a whole. The democracy of it blew me away.”

The committee meetings are conducted in Spanish, with summaries in English. During the last three years, the committee has succeeded in encouraging Hermiston’s mayor and city council to write President Obama and U.S. senators and representative asking for fair and sensible immigration and undocumented immigrant reform. In addition, the committee has initiated Cinco de Mayo celebrations, sponsored Hispanic voter registration drives and obtained a 30-year agreement for three soccer fields with bathrooms on school property.

“I am proud of our committee and its representatives, and of my city and its government, for supporting this innovative and positive group,” Anderson says.

Kranovich is also proud. He says he knew immediately upon attending the Hispanic Advisory Committee meeting that he wanted to present Anderson with the president’s special award when the opportunity arose.

“That community adores the guy. He does the stuff that we all would like to think we’re brave enough to do but, when it comes down to it, maybe we really aren’t,” he says.

“There are three things in life that I have come to abhor: ignorance, cowardice and arrogance; all of which, at one time or another, I have been guilty,” Kranovich said in his speech during the awards ceremony. “George Anderson demonstrates none of these things. He is enlightened, courageous and humble. He is a man of the people and an eastern Oregon lawyer of whom we can all be proud.”

Anderson, who now mainly handles complex agriculture- and agribusiness-related transactions, credits several mentors, including Pendleton attorneys Larry Rew, Alex Byler and George Corey; longtime legal assistants Lisa Anderson and Becky Lloyd; and family for his success over the years. His daughters and his son Will, a geographic information systems (GIS) consultant for farmers in the Hermiston area, helped around the office when they were growing up. They did everything from janitorial work to copying and receptionist work, eventually graduating to legal secretaries.

“It’s absolutely wonderful to be with your family like that and we get along, so it’s fine,” Anderson says.

After nearly 40 years of practicing law, Anderson says his biggest accomplishment is his ongoing commitment to justice, observing:

Anderson, who has three grandchildren and relishes his time on the Columbia River when he’s not working, says his hobbies don’t include watching dramas on T.V. because his work is full of them. He’s also quick to note that he doesn’t plan to retire anytime soon.

“The Burns brothers are the morticians here in town, and I always say that I’m retiring when Kevin and Dan wheel me out of here on a gurney,” he says. “I love what I do. I can’t wait to come down to my office and see what kind of problem I need to solve.”