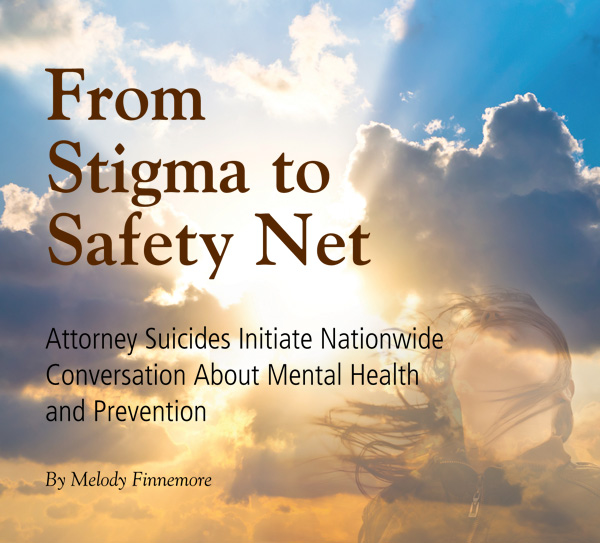 Signs to Look For, Ways to Help

“I basically retired because of what happened,” Erickson says. “I suffer from my own bouts of depression, and Lee’s death absolutely devastated me. It has hugely impacted me on a personal and professional level.”

On Dec. 5, 2014, Erickson spent the night at Carter’s home in Wheeler. Carter was a deputy district attorney for Tillamook County, and the pair often enjoyed sports, vacations and hanging out after the rigors of prosecuting cases. Erickson woke the next morning — a Friday — and left for work. Shortly after that, Carter shot himself in the head on the same couch where Erickson had slept just a few hours earlier.

Despite a supportive boss in Bill Porter and colleagues he admired, Erickson felt alienated and alone in his grief.

“If I tell people that my best friend blew his brains out about an hour after I left his house, and I was shell-shocked, had to tell my boss I couldn’t perform and quit my job, what are people supposed to say to that?”

Legal colleague Steve Yarbrough also continues to struggle with the impact of Carter’s suicide, as well as his own feelings of depression that are fueled by the pressures of running a partnership and handling stressful cases.

Now a partner with Besson & Yarbrough in Los Altos, ­Calif., Yarbrough went to law school with Carter at San Francisco’s Hastings College of the Law. Carter was 30 and Yarbrough was 42 when the pair became law students in 1992, and they roomed together for more than a year during that period.

“Lee was doing defense work with the San Francisco Public Defender’s office. I was clerking at the criminal division of the Attorney General’s office in San Francisco,” Yarbrough wrote in a commemoration of Carter’s life. “After graduation, we joked that oddly our job applications must have gotten mixed up because we each did a complete role reversal. Lee immediately became a prosecutor and I accepted a public defender job.”

Carter later moved to Oregon and, while the pair stayed in touch early on, distance and busy schedules eventually took over. Yarbrough, shocked to hear that Carter had killed himself, went online and began doing some research about attorneys and suicide. He discovered a recent rash of suicides, particularly among trial attorneys. He also learned about an increasing movement on the part of bar associations, other organizations for legal professionals, and mental health professionals to provide an effective safety network to help prevent attorney suicides.

According to the Centers for Disease Control and Prevention, lawyers are among the top five professions with the highest suicide rates. Attorneys follow dentists, pharmacists and physicians on the list, with engineers fifth on the list.

The ABA Journal has chronicled the spike in lawyer suicides across the country since 2010, which includes a dozen attorneys in Kentucky during that period and six of those occurring in 2013.

The State Bar of Georgia appointed a panel to explore suicide prevention resources for attorneys and their families after three lawyers killed themselves over a nine-month period in 2012-13. Robin Frazier Clark, then the bar’s president, was discussing her “How to Save a Life” initiative with the bar’s executive director on the same day Thomas “Jake” Waldrop, federal assistant public defender, killed himself in the bar’s parking garage. Oklahoma and South Carolina are among the states that have seen a drastic spike in attorney suicides in recent years, according to the ABA Journal.

Statistics show that lawyers are 3.6 times more likely to experience depression than other professionals. Opinions vary on the reasons for this, ranging from the debt law students face when they graduate and the financial pressures that plague many attorneys throughout their career to the physical and mental tolls exacted by working 80-plus hours a week, often on emotionally draining cases, and at the expense of time and energy for personal relationships and interests outside of work.

The problem starts well before attorneys enter the profession, according to a 2013 report by the Yale Journal of Health Policy, Law and Ethics. The report cites a study that found 44 percent of law students met the criteria for clinical depression, as well as higher than average levels of alcohol and drug abuse than their peers in college. Law students face higher levels of stress and alcohol abuse than medical students. In addition, stress and anxiety continues to increase during the years following graduation, according to the report, titled “Stemming the Tide of Law Student Depression: What Law Schools Need to Learn from the Science of Positive Psychology.”

“We also know that the problems law students suffer are tied directly to the law school experience. Before they enter law school, students show no signs of elevated psychological distress compared to the general population, but just six months into school, their negative symptom levels increase dramatically,” the report states.

Shari Gregory, assistant director and a licensed clinical social worker and attorney counselor for the Oregon Attorney Assistance Program (OAAP), says that many people suffer with depression or other mental health ailments that may contribute to suicidal thoughts. Some — but not all — have been diagnosed with chronic depression, anxiety or bipolar disorder.She notes that the financial pressures that have accompanied the recent economic crisis have made things even more difficult for people who are suffering with depression or other mental health issues, noting that additional financial pressure can be particularly challenging for someone who is already struggling every day.

Gregory also points to the adversarial nature of the profession along with the constant feeling of being critiqued by clients, judges, opposing counsel and society in general as important reasons why the profession can be taxing on mental health. In addition, attorneys often work in a culture that requires them to always be strong and not show any weaknesses, either professionally or personally.

One theory about the high rate of suicide among lawyers has to do with who is attracted to being a lawyer in the first place. The profession often attracts high achievers and people who are accustomed to being the helpers and role models, people who are not accustomed to failure or losing. Yet, Gregory notes, the nature of much legal work is that there is often a winner and a loser, which can be very difficult for lawyers to adjust to.

“Many lawyers are accustomed to problem solving on their own, and they often are not comfortable asking for help when it’s needed,” she adds. “When things get overwhelming, it is particularly important to ask for help so that you can maintain perspective and keep on going. Attorneys are good advocates for others and often put others before themselves. It can be hard for lawyers to ask for help – and sometimes they don’t know where to turn.” In Oregon, the OAAP is available to help lawyers, judges and law students who are suffering.

When the OAAP reaches out to someone who has suicidal thoughts, it provides crisis intervention, short-term counseling and referrals to long-term therapists. The crisis intervention involves helping the person rediscover his or her support system, personal strengths and reasons for living. Attorneys with suicidal thoughts can contact the OAAP directly, and family members, colleagues, supervisors, judges and opposing counsel also can contact an OAAP attorney counselor if they feel an attorney, judge, or law student they know may be considering suicide. The OAAP’s services are free and confidential.

“If someone is feeling despondent and is contemplating suicide, there is a lot we — and their support system — can do to help. The most important thing is that the person that is struggling with suicidal thoughts has someone they feel safe with and has someone they are willing to talk to. This will greatly increase the chances that he or she will not take action on their thoughts,” Gregory says. “The good news is that we (as a society) are talking more openly about mental health. This takes a lot of the stigma away and shows people there is a way to get help — and that they are not alone.”

Grief Accompanied by Some Positive Lessons

Erickson and Yarbrough knew Carter during different periods in his life, but both say he was not one to share his emotions or his worries about his finances. Like so many attorneys, Carter carried law school debt and dealt with other financial pressures that snowballed over the years. A failed marriage may have contributed to Carter’s depression, and a steady stream of child abuse and domestic violence cases could have been a culprit as well. Since he left no note and didn’t talk to anyone about his suicidal feelings, friends and family are left only to speculate what led Carter to take his own life and how they could have helped prevent it.

While Erickson and Yarbrough have taken different paths professionally since Carter’s suicide, they agree that the key to coping with it has been to talk about it — and other emotions they are dealing with — with friends and family.

After leaving the district attorney’s office, Erickson took a few months to travel around Europe. Since he returned home, he has had plenty of quiet hours while his wife is at work as a nurse to think about the losses in his life. Erickson’s sister committed suicide not long before Carter, and her death essentially killed Erickson’s father and destroyed his family, he says.

In Erickson’s opinion, Carter’s personal problems led to his depression and suicide rather than his legal practice. “He was clearly one of the most experienced attorneys in our office, and he easily would have replaced me had I stepped down at that point,” he says.

At the same time, he wonders how trial attorneys can deal with the horrors they see each day in the courtroom. Erickson for many years headed a multidisciplinary team that dealt with child abuse and, though he handled other cases for the county, he was most deeply impacted by those involving children.

“It’s a little like living with post-traumatic stress every day, and if I had had to do those cases all the time in a big city like Los Angeles, I probably would eat a gun,” he says. “I’m warped for life because of some of the cases I saw.”

Yarbrough says many of his cases are stressful, but he continues to practice because he enjoys the adrenaline rush. There is plenty of heartbreak along the way, though, including a client who committed suicide shortly after they prevailed at trial.

When asked if the profession is adequately caring for attorneys with mental health issues, Erickson acknowledges that it’s a culture that is difficult to change.

“I don’t know how you get a bunch of Type A personalities with these kinds of egos to divest themselves and come out of that shell,” he says. “I finally just decided the hell with it. I have to let this stuff out or it’s going to eat me alive.”

Erickson cleaned out Carter’s home after he died, and he debated about keeping certain possessions that remind him of their friendship. He says the process taught him much about dealing with death and how he wants to remember the best friend he lost. The healing process also has taught him a few things about his own life as a lawyer.

“I’m blessed by the curse of what I saw happen because it showed me that I made a difference and the work I did as an attorney was important,” Erickson says.

ABOUT THE AUTHOR
Melody Finnemore is a Portland-area freelance writer and frequent contributor to the Bulletin. She can be reached at precision pdx@comcast.net