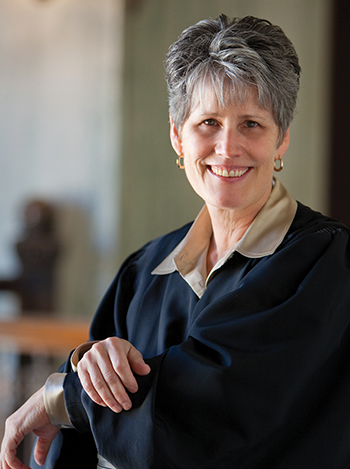 Virginia L. Linder has forged a career out of firsts. Just six years after joining the Oregon Department of Justice immediately following law school, she became Oregon’s solicitor general at age 33, the first woman to assume that position — the state’s chief appellate lawyer. She held the post for more than 11 years, longer than anyone in state history.

In that role, she also became the first woman in Oregon history to represent the state before the nation’s highest court.

After serving nine years on the Oregon Court of Appeals, Linder successfully ran for an open seat on the Oregon Supreme Court, defeating two well-financed opponents and becoming the first woman elected without first being appointed to the court.

“I went to law school knowing that I would find satisfaction and reward in practicing law,” says Linder, who will retire from the court at the end of this month. “But I never dreamed that I would have the opportunities that I have had in my career.”

Like many female attorneys in her age group, Linder grew up knowing no women who were lawyers or judges, not seeing any on television or movies, and not having a female role model in the law.

She was 17 when she first thought of going into the profession, inspired by a high school teacher’s government class. She became fascinated by the notion of courts being a civilized way to resolve disputes and protect people’s rights, including children’s. In college, Linder received encouragement from some male students who also were interested in going into law, and she met her first female attorney, Betty Roberts, who was running for governor at the time.

At Willamette University College of Law, Linder found that her class and the two before her were the first at the school in which female law students made up around 20 percent of the student body, which represented real progress, she felt. Those women applied pressure to the powers that be that sexist language such as “Know all men by these presents,” the opening line on a diploma, wasn’t going to cut it anymore. A female valedictorian of one of the graduating classes in that time threatened not to attend graduation unless the wording got changed: the leadership responded by altering the language.

Shortly after Linder was born in a small town in Colorado, her mother and father separated, and Linder, her sister and mother moved to be close to her maternal grandparents. Her parents later divorced. Linder recalls that her first exposure to a judge and court was when she was about 6 years old, when she and her older sister had to appear in court in connection with visitation and child support.

But she has good memories of staying with her grandparents on their small farm, playing on farm equipment and learning woodworking from her grandfather and great-grandfather, a hobby she still pursues. Just before Linder started first grade, her mother remarried, and the family moved to a semi-rural area outside of Sacramento, Calif. Her mother and stepfather both were teachers, as was her grandmother, and Linder’s family instilled in her a love of reading, education and learning. She completed public school, then applied to and was accepted at several colleges, choosing Southern Oregon University after she fell in love with the Ashland area.

Naturally athletic, she became a proficient snow skier and instructor, and also excelled in the classroom, graduating summa cum laude with a major in political science. After earning her bachelor’s degree, Linder lived with her sister’s family in Virginia for two years, working odd jobs and saving money to go to law school. Linder was anxious to return to Oregon and chose to obtain her law degree at Willamette, partly to be near government. There, in her second and third years she clerked in the appellate division of the Department of Justice, where she accepted her first law job after passing the bar, becoming an assistant attorney general in that department’s division.

Just four years later, she applied for and got the post of assistant solicitor general, with the backing of Dave Frohnmayer, who was attorney general at the time. Two years afterward, the solicitor general spot opened, and she obtained that position, which is responsible for all appellate work involving the state. She handled many U.S. Supreme Court and Oregon Supreme Court cases while serving under four attorneys general and then was appointed to the Oregon Court of Appeals by Gov. John Kitzhaber. After spending nine years on one of the nation’s busiest appellate courts, Linder decided to run for an open seat on the Oregon Supreme Court.

Unusually, then and now, three candidates vied for the post in the 2006 primary, her opponents being Jack Roberts, a former Oregon labor commissioner, and Pendleton trial lawyer Gene Hallman. Roberts and Linder — in that order — garnered the highest number of votes in a close race; they then faced each other in the general election. All told, cash and in-kind spending by the three candidates in the primary and general elections came to over $1.4 million, making it one of Oregon’s most expensive judicial contests.

However, Linder was vastly outspent by the other candidates, especially in the primary. But she received endorsements from the state’s major newspapers and was backed by a majority of members in the Oregon State Bar’s judicial preference poll. She didn’t have enough money to buy TV advertising, so the campaign relied on establishing an Internet website, which was “cutting-edge then,” and did “grass-roots, old-fashioned” outreach by driving all over the state and meeting people, says J. Nicole DeFever, now a senior assistant attorney general with the Oregon Department of Justice, who ran the campaign.

Linder emphasized her appellate experience and that she was the only judge in the race, but some of her campaign advisers counseled her not to include mention that the Oregon Supreme Court at the time contained no female justices and that that was one of the reasons she had decided to jump into the race.

“But in truth, it was part of why I was running, and I was finding it uncomfortable not to include that in my answers,” she says. “It was simply true, and I believed it was valid to talk about. My campaign folks gave up eventually on trying to convince me otherwise; and it turned out, what I felt and thought about it all resonated with many voters. It really matters to people that we have women in influential places of decision-making.”

Linder says her passion for running flowed “from my commitment to having women be full participants at all levels of government, the legal profession and community life. Women who have had the opportunities, challenges and successes that I have been fortunate to have must be willing to run.” She adds that the virtues of a diverse bench — to the process of case adjudication, to the development of the law, and to public respect and confidence — are too many and too important for a qualified woman not to run. She says she ran “as much or more for other women, minorities and nontraditional members of the bar” as for herself.

“That just took tremendous courage on her part,” and set an example for others that they can run and win a competitive statewide race for an appellate judgeship, says Oregon Chief Justice Thomas A. Balmer. Balmer, who has known Linder since she was solicitor general and watched her successfully argue a U.S. Supreme Court case, says Linder’s earlier experience at the DOJ with matters such as criminal law served her well on the Oregon Supreme Court.

“It’s not in her personality to be knee-jerk about anything,” Balmer says. Rather, she gives careful thought to every case, and always considers the “subtle interpretations of the constitution.”

“She is one of the most generous, fair-minded people that I think I have ever met,” says Pellegrini. “She is as willing to challenge her own positions as she is to challenge yours.” All who encounter Linder, “whether in a hardware store or on the bench,” come away “thinking they’ve been heard, considered, valued.”

In addition, “Both in her thinking and writing and opinions, she is so clear and exacting.”

Balmer says that in addition to writing concise opinions of her own, Linder constantly makes “unsung contributions” to others’ opinions on the court with her skilled editing. Instead of merely indicating that she agrees or disagrees with an opinion, she also often adds “very thoughtful editing suggestions,” such as offering that a more precise word would make the opinion clearer. Even though her name won’t appear on others’ opinions, they will be better because of her suggested modifications, he says.

Pellegrini says Linder feels an acute responsibility to the state and the public to be available and to share how resources are being used. “I think that Virginia personifies what the public expects of lawyers that represent the public.”

DeFever says gaining voters’ endorsement was “really affirming for Gini,” adding that working with her was inspiring. “She’s had a phenomenal career. Justice Linder has so much integrity. She’s true to herself and true to others. She cares so much about the law and the cases.”

Remarking in a prepared statement about Linder’s retirement from the high court, Gov. Kate Brown said Linder paved the way for other women to advance in the legal field. Referring to Linder’s 35 years of public service, the governor added, “Justice Linder is the embodiment of our state motto, ‘She flies with her own wings.’ ”

“I think, in the end, deciding to run and succeeding in that is one of the things that means the most to me in terms of what I have managed to do in my career,” Linder reflects. “I have done so much more than I could ever have hoped for in my career. I feel inordinately lucky and fortunate. I have had a great ride.”

ABOUT THE AUTHOR
Cliff Collins is a Portland-area freelance writer and frequent contributor to the Bulletin. Reach him at tundra95877@mypacks.net.