Still Proud to Be an Oregon Lawyer:
End-of- Term Reflections
By Rich Spier 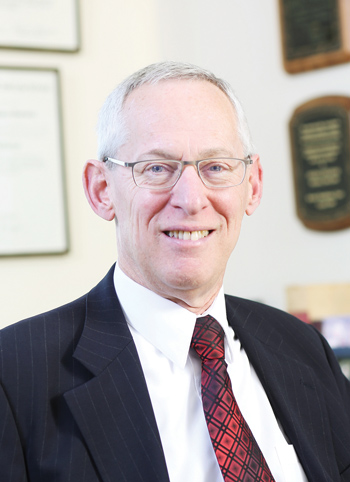 As my one-year term as Oregon State Bar president draws to a close, here’s my end-of-year report about my experience as president and about some recent developments at the OSB.

Still Proud to be an Oregon Lawyer

The story in the January 2015 OSB Bulletin about my beginning this term as president quoted me as saying: “Oregon lawyers have a special reputation for professionalism and civility. I think this is due to the relatively small size of the Oregon bar, and I think it is due to the Oregon spirit — a sense of responsibility to the community and to the environment, progressiveness and optimism, mutual respect and courtesy, and gratitude for the good fortune of living in this special part of the world.” The cover photo is labeled, “Proud to be an Oregon Lawyer.”

The story concluded by quoting me as saying, ‘It’s a privilege to be able to help lead this organization of fine lawyers.” I still feel that way — indeed, even more strongly. Lawyers from other states continue to tell me about the good experiences they have with members of the OSB as opposing counsel; they are not only effective advocates for their clients, but also reasonable, civil, professional and courteous. We do have an enviable bar culture.

And out-of-state lawyers and bar leaders also regularly comment favorably about the OSB as an organization. Our soon-to-be retired executive director Sylvia Stevens has a national reputation as a bar executive, with insightful vision about the future of the legal profession. The OSB staff is devoted and effective. The Board of Governors and hundreds of other OSB member volunteers are dedicated to improving access to justice for all Oregonians and to improving quality of practice and quality of life for their fellow members. We are recognized nationally for the breadth of our programs, including the PLF (which still remains the only mandatory malpractice program housed and governed by a state bar), the PLF Oregon Attorney Assistance Program, high quality CLE seminars and CLE publications, our commitment to diversity and inclusion and much more.

The best part of this job is having Oregon lawyers tell me regularly that they appreciate the expenditure of time and effort that it takes to be OSB president. Dear colleagues, it has been an honor and a pleasure.

Changes in Titles and in Personnel

As most of you know, long-term OSB employee and now Executive Director Sylvia Stevens is retiring, and General Counsel Helen Hierschbiel will take over, as of Jan. 1, 2016. In recognition of the broad responsibilities of the position (and to achieve the same terminology as the executive head of PLF), the Board of Governors voted to change the title from executive director to chief executive officer. Incoming CEO Hierschbiel has appointed present Deputy General Counsel Amber Hollister to become our new general counsel on January 1.

Review of Disciplinary Rules of Procedure

In November, the Board of Governors received the report of the Discipline System Review Committee with more than 20 recommendations for enhancing the effectiveness, efficiency and fairness of the discipline system. (This relates to the rules for processing disciplinary cases, not the substantive Rules of Professional Conduct.) The committee was appointed by my predecessor, OSB President Tom Kranovich, to review the findings and suggestions of the ABA Standing Committee on Professional Discipline’s Evaluation Team, which conducted a comprehensive review of our discipline system in 2014 at the invitation of the board and the Oregon Supreme Court. The DSRC spent a year developing recommendations for the Board of Governors and the court based on the ABA evaluation as well as some of its own ideas.

In mid-December, the Board of Governors will publish the report, along with one or more expected minority reports, with a request for written comment. Thereafter, the board will provide its own report and recommendations to the Oregon Supreme Court. Once the court identifies the recommendations it is prepared to accept, the process of drafting rules will begin. The board’s goal is to have proposed rules to the Oregon Supreme Court in the fall of 2016, with a view toward adoption and implementation effective at the beginning of 2017.

The objective is to improve the efficiency and effectiveness of the disciplinary system, so as to provide the best possible protection of the public, along with fairness and due process to members.

Many of you know that one of my interests as president is to try to find ways to reduce the “justice gap” between the large percentage of Oregonians who can’t afford or believe they can’t afford to hire lawyers, and the many recent and some not-so-recent admittees that are unemployed or underemployed.

It’s become increasingly clear that many viable practice opportunities exist in small towns and rural areas throughout the state. The cover story on this subject in the October 2015 issue of the Bulletin quoted me as saying: “During my trips around Oregon to meet with local bar groups, lawyers in those geographical areas repeatedly told me that good opportunities exist there for lawyers willing to make the move. Established lawyers are willing to provide mentorship, referrals, introductions and advice. There is often more work than the established lawyers can handle.”

In this issue of the magazine we are continuing our series on rural practice in hopes of encouraging new lawyers to consider options outside the major metro areas, most of which have an already high ratio of lawyers to potential clients. I am also pleased to announce the expansion of the bar’s Rural Opportunity Fellowship. This fellowship, which gave its first award in 2015, provides funds for eligible law students to take summer clerkships with public employers or 501(c)3 organization in certain geographic areas. We are planning to award two fellowships in 2016. For details, including eligibility guidelines, go to osbar.org/diversity.

As it does every year, the board’s Budget and Finance Committee spent considerable time reviewing our financial condition and prospects for the next few years. The committee discussed projected cash flow, investment performance and policies, performance of the Oregon State Bar Center building (in the bar’s role as owner, partial occupant and partial landlord). Chief Financial Officer Rod Wegener provided invaluable input and insight.

Interested members can look at budget projections available online at www.osbar.org/_docs/leadership/hod/2015/15HODRpt2016Budget.pdf. With no license fee increase, CFO Wegener projected a 2016 net revenue of about $88,000, against total revenue of about $11,200,000. You can see that this doesn’t allow much margin for unpredictable events, including the low pass rate on the July 2015 bar exam (see discussion below), possible continuing lower pass rates, and uncertain rate of retirements of older lawyers. Also, some income sources, such as CLE Seminar registration fees and legal publication print sales, are necessarily unpredictable.

With the fee increase, projected total revenue for 2016 is about $11,950,000, and projected net revenue is about $830,000. This will allow for uncertainties, and should allow the bar to avoid further membership fee increases for several years.

The Board of Governors is acutely aware of the effect of even small fee increases on many members, and believes that this small bottom line increase on annual billing statements is necessary and prudent.

The bar is in the process of acquiring enterprise management software to replace a system that has been cobbled together over the last 30-plus years. A nationally recognized and experienced vendor was selected with assistance from outside consultants and our own staff experts. This is a major undertaking for the organization in terms of both dollars and human resources, but we are confident that the new system will enable the bar to provide more efficient services at nearly all levels. Online applications will be enabled, online purchasing and payment will be enhanced, and in subsequent phases we will implement electronic case management for discipline, Client Security Fund, arbitration and UPL cases.

One of our bar’s core values is a commitment to diversity and inclusion. By vote of the membership at the bar’s 1975 town hall annual meeting, we dedicated funds for an affirmative action program, with the goal of increasing the number of minority lawyers in proportion to the minority population of Oregon. Since that time the program has grown and broadened in scope to become the Diversity & Inclusion (D&I) Department. While recruiting and retaining historically underrepresented racial and ethnic minority lawyers is still our top priority, we also are concerned with other underserved populations, and most D&I programs are open to anyone who can help achieve the department’s mission. You can learn more about our D&I programs online at www.osbar.org/diversity, and follow “OSB Diversity and Inclusion” on Facebook.

The members of the Oregon Board of Bar Examiners assure me that there has been no effort to make the exam harder to pass. These numbers are consistent with reduced pass rates in many other states. The reality is that law school applications are way down, and many law schools have had to lower measurable admissions criteria (grades and LSAT scores) in order to fill even their smaller entering classes. It is troubling to know that thousands of well-intentioned bar applicants nationwide incur ruinous law school debt loads, only to have their high hopes and financial futures dashed when they take the bar exam. However, OSB admissions standards must be kept at a level high enough to protect the public and to ensure the competence of our profession.

Meanwhile, it appears likely that Oregon will adopt the Uniform Bar Exam within a couple of years or so. For information on the UBE, see the article by then-Board of Bar Examiners Chair David White and me in the July 2015 Bulletin.

As to future pass rates under the UBE, David and I stated in our article, “Each UBE state retains authority to set its own pass score that applies to each law school graduate taking the UBE, whether in Oregon or in another UBE state.”

My hope is that law schools nationally will respond to the reduced volume of law school applications by not fostering unreasonable expectations in bar admissions and by providing more practice-based and clinical education, while not abandoning theory and doctrinal study. These steps by law schools could lead to higher pass rates.

Thanks again to Executive Director Sylvia Stevens, the entire bar staff, the Board of Governors members with whom I had the joy of serving over the last four years, and to the entire OSB membership, for your support during my term as president. I’m prouder than ever before to be an Oregon lawyer.

ABOUT THE AUTHOR
OSB President Rich Spier is a mediator in Portland.