Worth a Closer Look:
Astoria's Clatsop County Courthouse
By Roger B. Ley 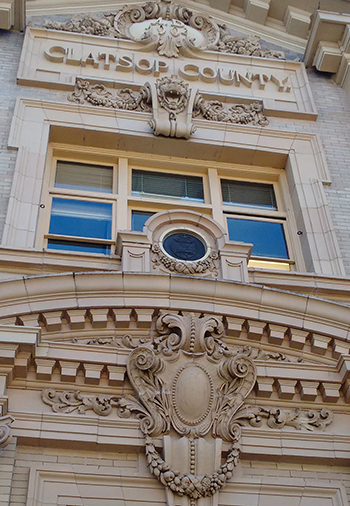 The finest feature of the Clatsop County Courthouse, in Astoria, is the decorated façade, which extends from the main entrance to the top of the building. The facade includes a lion’s head, a medallion with a sash of fruit and nuts draped below, a round window and more sashes and medallions, and a large molded frame and seashell ornament that contain the words A. D. 1904 CLATSOP COUNTY. It is dignified and substantial.

It says something about Astoria.

In the second half of the 19th century, Astoria was a Wild West town, with a huge dash of salt water thrown in. A salmon canning industry built on rickety pilings over the Columbia River supplied the world with canned fish. West of the courthouse was a red light district: a freewheeling area where sometimes the law was loosely enforced, and sometimes men in bars were dropped through a hole in the floor, finding themselves next morning on a fast clipper to China. East of the courthouse sat the whole industry of canning, which burned to the water every so often — every so often because as soon as it burned, the canneries’ owners built it back as it had been before, and then it would burn again.

Before the present courthouse existed, court held session in a frame building as amenable to fire and as insubstantial as the rest of the town.

By 1900 the powers that were must have wanted to change that. The town had lived on the waterfront hosting an industry built on stilts for many years. They wanted a courthouse with substance, a courthouse that would demonstrate probity and endurance beyond the burnable canneries and wooden hotels and unrestrained living that came of thousands of single men working very hard at dangerous jobs — and then coming into town with money.

Enter France. In the 19th century the French invented the Beaux Arts school of architecture, which emphasized columns with classical flair and lots of decorations that celebrated the prosperity of France, the France of the Eiffel Tower, lots of colonies, lots of food, and lots of beautiful boulevards. Edgar Lazarus was a practitioner of the Beaux Arts school. He designed the courthouse.

Edgar Lazarus grew up in Baltimore, Maryland and graduated from architecture school in 1888. His father had been part of a prominent Jewish prerevolutionary merchant family in Charleston, South Carolina, served in the Confederate army and relocated to Baltimore after the Civil war to avoid the Reconstruction occupation of Charleston. In Baltimore, Lazarus senior built his commission merchant business from scratch. At the age of 24, in 1892, young Edgar left his first job with the army quartermaster corps in D. C. and migrated across the country to Portland. Why? He knew no one in Portland. Perhaps the fact that his father had uprooted from the Deep South to Maryland gave him the idea that he could make a better life by moving to Oregon. Perhaps he figured there would be better opportunities to create buildings here, rather than in the stuffy east in the bureaucratic army.

In Portland, Lazarus designed houses that had steep roofs and few right angles and thrust chimneys through rooms. His courthouses in Oregon, which also included the Morrow county courthouse in Heppner, were nothing like that.

Buildings express the ideas and plans and aspirations of the people who design them and vote for them and build them. This building expresses the hopes and aspirations of the local government and undoubtedly of Edgar Lazarus, and ultimately of the people of Clatsop County. But how? How did the hopes and aspirations of the public and all those people turn (Boom!) into that building? It’s fun to think about all that. I think the city parents wanted a courthouse that said to all of Oregon that Astoria had come of age, and was here to stay. Justice is administered in a courthouse, and the county government wanted to say justice would be administered with dignity. The visitor to this courthouse, or to any courthouse anywhere, is invited to speculate. As to Edgar Lazarus, who knows?

Besides pondering the minds of civic leaders of 1902, and the influences upon Edgar Lazarus, the purpose of this article is to point out details of the courthouse so people can enjoy walking around and looking at it. This includes lawyers who sometimes have to wait either before or after appearing in court.

Most of the building is pale orangey brick. This sounds bold, for a courthouse, but it is tasteful and unusual and contrasts nicely with the other buildings in Astoria. Perhaps the bricks were made with orange or reddish soil, which is abundant and spectacular in parts of Clatsop County.

Yes, some would say the modified seashell shapes and the draperies of fruit and produce and the elaborate coils in the capitals above the columns and the rest, not only in the entrance but also elsewhere outside, are too much, too rococo. But most of the façade on all four sides is plain and almost severe. The contrast makes the building. In fact, some critics say the building was designed in the American Renaissance style, not Beaux Arts. I like to think the fancy entrance to the building was designed in full Beaux Arts style, whereas the rest of the building shows American Renaissance influence, which means square regular design, symmetrical layout, simple decorative touches.

Continuing around the outside of the building, to the west, an outdoor stairway, presumably for emergency egress, is easy to climb. Up close the visitor can admire the volutes, especially where three volutes line up at the corners. You can see other seashells and other molded decoration up close too. One can look at and admire the big electrical connection for the building up close from these stairs, and the Columbia River is visible too.

Within the building on the second of three floors, counting the ground as floor one, is marble, lots of marble. Big ovals in the marble cry out for identification; I am convinced that they are giant clamshells, but who knows? What else but an open clamshell would have two irregular ovals joined at one end?

Walking up the steps to the upper floor, you see the famous Flavel house out the window. Flavel was a pioneer bar pilot, and as skillful at navigating the business world as he was at guiding ships through the monstrous waters at the mouth of the Columbia. But to me, the eaves over the windows in his mansion look like heavy frowns over unhappy eyes.

The large courtroom in the upper floor has neat ribbon-like designs embossed in the jury box and there is a lovely sort of arch over the judge’s bench. Counsel table has Ionic columns, the first time I have ever seen Greek columns on a table for lawyers pleading cases. The walls interestingly curve into the ceilings, and there are yet more columns set into the walls of this courtroom.

You can’t see them in the basement (I am skipping around) because the room is locked, but the basement hosts the original 1904 (or so) gas furnace, as well as a convincing ball and chain used for discouraging prisoners from escaping. With patience and luck, one might gain permission to see these important parts of the courthouse. There is a small law library which contains law books from before the Civil War, when Oregon was a federal territory and therefore had federal judges.

Flipping outside again, there’s more than the wonderful façade. The cannon on the lawn bears close examination, not only because of the mysterious numbers on the barrel but also because close examination reveals that this is not American artillery. It is Japanese. It’s a memento of World War II and probably commemorates the fact that the Japanese sank, rather effortlessly, the American cruiser Astoria in the earlier stages of the war.

Still outside, two huge yew trees, shaped like giant bushes, deserve a close look, and those with a hide-and-seek set of mind can walk right toward the center of one of those trees and see nothing but yew tree. The gigantic log at the other corner of the courthouse lawn reminds one of the logging industry of this county, and of the huge trees that once covered most of this part of the continent. Returning to the geology motif, the blocks of stone at the base of the building, below the orangey bricks, have patterns of gently curved parallel lines, which suggest sand dunes turned to stone; maybe yes, maybe not the true origin, but neat to look at.

And last there is a mystery entrance to the courthouse under the steps that lead to the main entrance. It’s mysterious because a close examination indicates that this was at one time used as an entrance to the building. But why under another entrance?

Back into the courthouse for one last look, there are radiators and bathrooms. The radiators are original, and have curlicues and babies on artful graceful platforms in raised sculpture or relief on the side of the radiator, the kind of babies frequently seen in baroque Italian paintings. The sign for the men’s room says MEN on the outside, and it says Gentlemen on the inside. At some point the door must have been turned inside out. Styles change. The “Gentlemen” label was painted by hand, and paint puddled from that long past brush. Still in the bathroom, the walls are brown marble, and the marble has black squiggles that look like a seismograph of an earthquake activity or some other sensitively monitored event. The squiggles are probably the carbonized remains of plant life that grew from year to year at the bottom of a coral reef. Round holes about the size of a pencil, found occasionally in that suede marble, must be the remains of barnacles.

The courthouse still provides an anchor between the ever changing downtown area and the now mostly subdued residential area to the west. Edgar Lazarus and the county government of 1904 did well. The Clatsop County Courthouse is a fine building.

ABOUT THE AUTHOR
Roger B. Ley of Svensen, Ore., has been a general practice lawyer, first in Seattle and then in Clatsop County, for many years. He is gradually making the transition into retirement from law practice. He does not intend to retire from exploring and admiring architecture or other interesting features around the Pacific Northwest and has no plan to retire from writing about his travels.