Tested:
How Dave and Lynn Frohnmayer Responded to Adversity
By Tom Elden 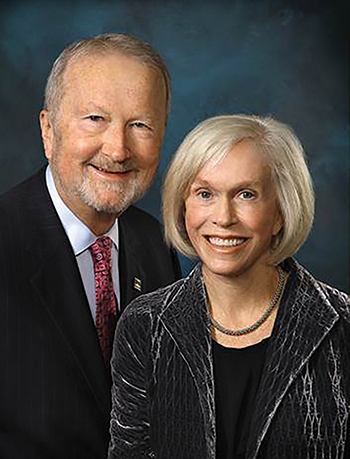 Everyone hopes to be remembered professionally for excellence, for compassion and courtesy, for fighting for our clients. We recall trials won or lost, disputes resolved, documents drafted, articles written and edited, cases adjudicated. I’m sure examples come to mind. For me, I will always remember the example set by Dave Frohnmayer and his wife, Lynn, not only from personal contact and recognition of Dave’s professional excellence, but for how they responded to tragedy with courage and determination.

Lynn also had a distinguished career, primarily in child welfare. In recent years, she has been a dedicated writer and organizer for the Fanconi Anemia Research Fund. She continues to serve on its grant review committee and board of directors and is an editor of its various publications.

Accomplishments cannot immunize any of us from the cruelty of disease. For Dave and Lynn, tragedy came in the form of Fanconi anemia (F.A.), a rare recessive genetic disease that took two of their daughters: Katie at age 12, and Kirsten at age 24. A third daughter, Amy, now 28, continues to courageously battle the disease. In the face of great losses, the Frohnmayers resolved to fight Fanconi anemia to save their daughters and so other families might be spared the same tragedy.

Dave and Lynn had no clue about F.A. until it struck. When it did they looked into every option. And doctors were limited in helping them navigate a medical world in which little was known. Once, Dave and Lynn traveled to Nova Scotia in hopes of finding a bone marrow match in extended family descendants.

In 1983, 10-year-old daughter Kirsten was the first to be diagnosed with F.A. This genetic disorder leads to bone marrow failure, leukemia and cancer. They later discovered their two other daughters, Katie and Amy, had inherited the same disease; their two sons, Mark and Jonathan, had not. They learned patients rarely lived to adulthood and that there was no known cure.

In 1991, Katie Frohnmayer, age 12, passed away from a stroke linked to F.A., after 18 hospitalizations in 14 months. Her sister Kirsten graduated Phi Beta Kappa from Stanford University while battling F.A. Like Katie, Kirsten was a woman of great promise. And like Katie, Kirsten died of complications from F.A. She developed leukemia and passed away in 1997 at age 24, following a bone marrow transplant.

I remember Dave with his daughters, coming in on weekends to the Justice Building on Court Street in Salem. Today, memorial plaques for Katie and Kirsten, funded by donations from DOJ employees and Marion County bar members, can be found under a bench and next to a magnolia tree at the east end of the capitol.

Dave and Lynn’s “kitchen table” response created the Fanconi Anemia Research Fund. This fund has not only revealed secrets about F.A., but has greatly helped advance the fight against other diseases such as breast cancer, to which it has a scientifically important connection. In 2012 the Frohnmayers received the Outstanding Service Award from the American Society of Hematology, honoring their vision in founding the Fanconi Anemia Research Fund.

Lynn recalls that at first they read available literature on F.A., and called the authors of every article they found. Scientists were uniformly generous with their time, while acknowledging this was a fatal and poorly understood genetic disease.

In 1983, they knew of no other family in the world with F.A. They were depressed, terrified and lonely. Remember, at this time there were no helpful search engines; communications were by telephone and letter.

By 1985, a researcher at Rockefeller University, New York, had developed a registry of all known cases of F.A. and suggested the Frohnmayers start a support group. Lynn agreed to mail their letters to families in her registry, inviting recipients to communicate with Dave and Lynn. Nineteen families responded, and an informal support group was launched. Dave and Lynn began to write The F.A. Family Newsletter to share with families the little knowledge they gleaned from scientists.

In 1988, a scientist from Rockefeller University asked Dave and Lynn to raise $50,000 for research. They wrote asking friends, family members and acquaintances to contribute to the university. In 1989, three institutions asked them to raise research dollars. Again the Frohnmayers wrote their contacts, this time asking they write checks to the “Fanconi Anemia Research Fund” (which did not yet exist) and send them to their home address. They sent the checks to the requesting institutions but two returned the checks as they could not cash them as written. The Frohnmayers hurriedly formed a 501(c)(3) charitable corporation, named it the Fanconi Anemia Research Fund, formed a board, established articles of incorporation and secured nonprofit status from the Internal Revenue Service.

Successes in Fanconi Research and Knowledge

In the past 26 years, these efforts have funded 206 scientific grants from 55 research centers, for a cost of over $17 million. These grants plus regular scientific symposia have produced impressive results. In 1989, no F.A. gene had been discovered. Researchers have now discovered 18 different genes that cause this disorder. Five of the F.A. genes are also breast cancer susceptibility genes. These discoveries brought a new host of cancer scientists to their scientific meetings and placed F.A. in the middle of general cancer research. Gene discovery enables researchers to study the function of proteins encoded by genes. Scientists have established that the gene network is intimately involved in DNA repair and prevents cancer when F.A. genes are functioning normally.

Lynn says when Katie desperately needed a bone marrow transplant in 1986, no center in this country would do it because she had no matched sibling donor. The National Donor Program was only formed in 1986 — an unrelated donor transplant was not yet an option. When Kirsten developed leukemia in 1995, several centers were willing to do an unrelated donor transplant, but her chances of survival were 20 percent.

In 1999, the fund gave the University of Minnesota a grant to determine if one drug, fludarabine, could improve transplant outcomes. This proved a “game changer.” Almost immediately, success rates reached 60 percent. Today, at any of the three F.A. comprehensive treatment centers, between 85 to 90 percent of patients survive their transplant. At least half the patients attending F.A. family meetings are transplant survivors who are back in school or work, living a productive life. And now the focus has turned to developing better treatments for patients. Scientists are exploring drugs that might protect the cells of patients from damage. Life expectancy has increased by at least a decade since the inception of their fund.

The fund’s Scientific Symposium attracts more than 200 researchers every year. Two comprehensive newsletters are produced annually and a Guidelines for Diagnosis and Management, a comprehensive treatment guide for physicians and families, is in its fourth edition. The fund also focuses on prevention and early detection of oral cancers, a huge concern in this population.

As Lynn says, they started out in an age with no Internet to see what could be done for their family and wound up increasing the length and quality of countless lives. In last year’s Christmas update letter, Amy Frohnmayer thanked those who help support the fund and for giving her “the courage, again and again, to open my heart to the hope of a future.”

Dave Frohnmayer passed away March 10, 2015, age 74. He had an exceptional life. Other than not being elected governor, I suspect he had few professional setbacks. He was a great lawyer and a great person.

Over a year ago, shortly before his death, I asked him for advice to new attorneys facing serious challenges. His advice is worth repeating:

“My advice would seem clichéd if it were not true: Seize unexpected opportunities and grow from them. I never expected to be a law school dean let alone a university president, but the realm of public law was surprisingly good preparation. I never for a day have regretted my education and experience in the law as a calling. Even in the face of adversity, try to be building something. Small but cumulative efforts over time can lead to successes, even triumphs. In the face of adversity, fight back, instead of becoming a helpless victim. The Fanconi Anemia Research Fund has advanced science from the study of a rare orphan disorder into a mainstream field of discovery into the fundamental causes, and even therapies, of cancer.”

ABOUT THE AUTHOR
Tom Elden is a former senior assistant attorney general for the Oregon Department of Justice.

The Fanconi Anemia Research Fund has created the David B. Frohnmayer Scientific Fund, devoted specifically to supporting promising research and promoting clinical trials of new drugs and compounts. To learn more about it and the fight against Fanconi Anemia, see www.fanconi.org.

A version of this article by the Frohnmayers with an introduction by Tom Elden appeared in the Winter 2013 edition of the Marion County Bar Bulletin.