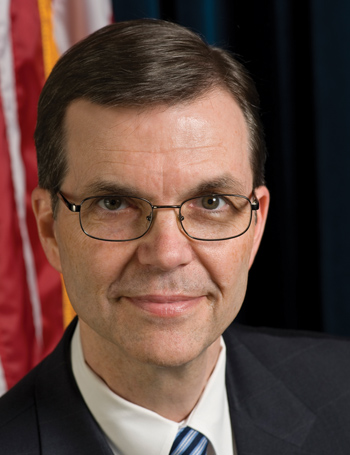 “Not many can say that they have had the chance to work with their best friend for the past 33 years. Thank you for all you have done for me. I will miss having you here each day. It has been a great ride!”—Claire Fay

The U.S. Attorney’s Office for the District of Oregon has a long-standing tradition of sending departing employees off with a Department of Justice seal bearing signatures and well-wishes from those who remain. The quoted passage from Kent Robinson’s seal was written by his wife and fellow prosecutor, Claire Fay. It’s a credit to Robinson that those who know him best admire him the most.

Robinson and Fay met in 1980 while working at the Department’s Tax Division in Washington, D.C. Their first date was a slam dance at a local mosh pit. Not exactly what you’d expect from a couple of tax division lawyers, but Kent Robinson is no ordinary G-Man. In the middle of his college career, he took a year off to travel across the country in an old station wagon. His hair hung down to his belt at the time. His parents were both psychiatrists, and he credits them with his tendency toward reflection and his ability to understand interpersonal dynamics and see multiple sides of issues. The year off had its intended effect, and he returned to school with greater focus. While initially interested in medicine, he gravitated to journalism and served as the editor for both his college newspaper and the ABA publication, The Tax Journal, while at Georgetown Law School.

After law school, Robinson completed a clerkship with U.S. District Judge Lawrence King in the Southern District of Florida, where he spent the majority of his time working on an enormous drug case that included indictments of several defendants during trial for plotting to kill the judge, and a class action involving 5,000 Haitian refugees who fled the Duvalier regime and were denied asylum in the United States. Following his clerkship, Robinson returned to Washington, D.C., where he went to work for the tax division, where he prosecuted and tried criminal tax cases all over the country and argued appeals in the 5th, 11th and 9th circuits.

From there, Robinson joined the U.S. Attorney’s Office in Alexandria, Va. The office was small at the time, and Robinson’s experience handling complex tax cases quickly led to some significant white-collar assignments. He worked on the district court litigation, in which the law firm of Caplin & Drysdale challenged the constitutionality of a federal statute mandating the forfeiture of criminal proceeds. The firm argued that the law violated a defendant’s Sixth Amendment right to his choice of counsel, but the Supreme Court ultimately held that the government’s interests in fully recovering all forfeitable assets overrode the defendant’s Sixth Amendment interests.1

Robinson also prosecuted Lyndon Larouche, the “Perpetual Presidential Candidate” who ran eight times between 1976 and 2004. Larouche initially supported Communism, but his views morphed and became more bizarre over time. For example, during one of his early presidential bids, Larouche predicted the extinction of the human race within 15 years. In 1988, he and several of his compatriots were caught in a fund raising scheme involving over $30 million in fraudulently obtained loans. Robinson pursued mail fraud and tax evasion charges against Larouche while Larouche ran for national office. Larouche claimed that the case was “politically motivated,” an assertion that the trial judge called “arrant nonsense.” After a month-long trial, Larouche was convicted of all charges and sentenced to 15 years in prison. Despite his conviction, Larouche still received over 25,000 votes in the 1988 presidential election.

Robinson and Fay transferred to the U.S. Attorney’s Office in Oregon in 1989, following an invitation from then-U.S. Attorney Charles Turner. Robinson prosecuted drug and violent crime cases, including Steve Bekins, a career-offender bank robber and the son of the moving company founder, and also continued to prosecute significant white collar cases, including Columbia Sportswear (for Custom Act violations). His career as a trial lawyer largely came to a close in 2001 when then-U.S. Attorney (and now U.S. District Judge) Michael Mosman promoted him to criminal division chief. The criminal chief job came just a few months before 9/11, and Robinson explains that his role in the office changed dramatically after that day. He recalled briefings at the FBI that included daily updates from Western Pennsylvania and the grisly recovery of human remains from United Airlines Flight 95 that were so badly mutilated, they could only be identified “by the pound.” He became involved, in varying degrees, with every terrorism-related case in the office from the Portland Seven to Mohamed Mohamud, the would-be Pioneer Square bomber. “The images from Pennsylvania stuck with me over the years. I couldn’t help but wonder what Portland might have been like if Mohamud had been able to execute the plan to set off a bomb at the tree lighting ceremony. There are extraordinary tough calls that have to be made.”

Judge Mosman, who worked with Robinson as both a colleague and a manager, describes Robinson as someone he relied upon for his “tremendous good judgment.” Robinson is “reflective and decisive” and “one of the most talented and prolific legal writers I’ve ever encountered,” the judge recalled. Having observed Robinson, Mosman says, “He’s the Oscar Robertson of lawyers in that he really has no weaknesses — he can try a case, run the office, appear before a grand jury or the 9th Circuit, coordinate with Main Justice — there really isn’t anything he cannot do well.”2

Multnomah County Circuit Court Judge and former U.S. Attorney Karin Immergut appointed Robinson to the national committee formed to overhaul criminal discovery practices in the wake of the department’s dismissal of charges against former Sen. Ted Stevens of Alaska. “Kent’s departure will be an enormous loss not only to the U.S. Attorney’s Office in the District of Oregon, but to the entire U.S. Department of Justice,” she explained. Immergut echoed Mosman’s comments about Robinson’s skills, underscoring his “impeccable judgment and sense of ethics.”

Robinson favors trial work and says that there is nothing he likes more than talking with a jury. “Juries never lose their common sense, while lawyers and judges can get side-tracked by semantics and hyper-technical reasoning,” he explains. As practical, rational and understanding as Robinson is known to be, “it would be a mistake to underestimate just how passionate an advocate he can be,” says Mosman. “He knows how to pull out all of the stops.”

Fay describes him as a man known both in the office and at home for his fair-minded and measured responses. He is a guy who keeps the ship on course. Their two grown sons, Brendan and Kent Jr., continue to call Robinson for advice because they too trust his judgment. When they aren’t working, Fay and Robinson spend most of their free time with their children. And Robinson has had more than his share of challenges in navigating the difficult balance of work and family; he is also a cancer survivor who lost his right eye to the disease and withstood three rounds of radiation therapy, all while continuing to serve as the office’s first assistant for U.S. attorneys Dwight Holton and Amanda Marshall.

After 35 years with the Department of Justice, Robinson left in January of 2015 to go into private practice with former Assistant U.S. Attorney Fred Petti. “I’ve seen up close what gets people in trouble with government regulators. I think I can help people and business avoid those pitfalls, or at least minimize the consequences if they make missteps.” Reflecting on his time in government service, Robinson laments that most members of the public don’t realize how often prosecutors decline cases (it’s roughly 50 percent) and provide guidance to law enforcement to ensure that investigations are consistent with the Constitution and respect the rule of law. “So much of what federal prosecutors do is incredibly hard work that takes place behind the scenes” he says. Robinson explains that the best part of being a federal prosecutor is “that I’ve believed in every case I’ve worked on, and in every argument I’ve made, I felt like I was urging the court to do the right thing.” For Robinson, it truly has been a great ride.

ABOUT THE AUTHOR
Kelly Zusman is appellate chief for the U.S. Attorney’s Office in Portland.