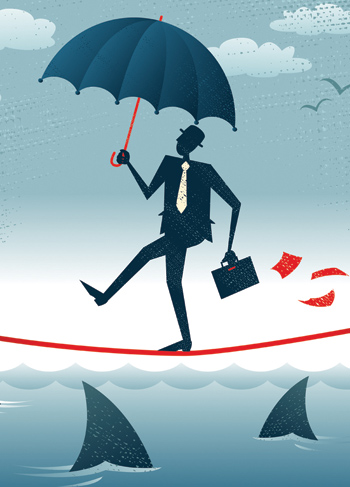 Oregon moved from the old Disciplinary Rules to the Rules of Professional Conduct patterned on the influential ABA Model Rules a decade ago. This past year, however, saw our supreme court’s first decision interpreting RPC 1.8(a), the “doing business with clients” rule. The Oregon Supreme Court had visited its predecessor, former DR 5-104(A), on many occasions. The court’s opinion last year in In re Spencer, 355 Or 679 (2014), however, highlighted that the new rule is even broader than the old formulation. Given the skeptical eye that the court has traditionally cast on any lawyer-client business transaction, firms considering a business deal with a client would be wise to carefully review the Spencer decision. In this column, we’ll look at both the Oregon Supreme Court’s interpretation of RPC 1.8(a) in Spencer and the additional risks that business deals pose beyond bar discipline.

Spencer arose on prosaic facts. The lawyer involved was also a licensed real estate broker. He was assisting a bankruptcy client and tried to help his client protect assets by purchasing a home. The lawyer — in his capacity as a real estate broker— located a house and assisted the client in purchasing it. The lawyer received a sales commission as a part of the transaction. The client later parted ways with the lawyer and filed a bar complaint over these dual roles.

Absent satisfying very high consent requirements, RPC 1.8(a) prohibits “[a] lawyer [from] … enter[ing] into a business transaction with a client or knowingly acquir[ing] an ownership, possessory, security or other pecuniary interest adverse to a client[.]” Spencer did not involve the second part of the disjunctive — an investment in a client, such as taking stock in lieu of fees. Rather, Spencer focused on the first part of the rule — a business transaction with a client in the form of the real estate brokerage.

The lawyer conceded that he had not obtained a conflict waiver. Instead, the lawyer argued that RPC 1.8(a) should be read consistently with former DR 5-104(A) that only prohibited business transactions (absent disclosure and consent) if the lawyer and the client had “differing interests therein and if the client expects the lawyer to exercise the lawyer’s professional judgment therein for the protection of the client[.]” The lawyer contended that his interests were aligned with the client in the house purchase. The Oregon Supreme Court, however, declined to read those qualifiers into RPC 1.8(a) and disciplined the lawyer.

The court began by noting that RPC 1.8(a) on its face is broader than the old formulation, prohibiting business transactions outright without appropriate waivers. The supreme court then concurred with the comments to the corresponding ABA Model Rule exempting lawyer-client transactions that are in the ordinary course of a client’s business such as having a law firm checking account with a bank client. The supreme court concluded by cautioning that a transaction does not necessarily have to be related to the legal work that the lawyer is performing for it to trigger RPC 1.8(a).

The Oregon Supreme Court’s broad reading of the “business transaction” component of RPC 1.8(a) means that lawyers who enter into such transactions with their clients need to comply with the exacting standards built into the rule, including that the transaction be “fair and reasonable to the client” and that the lawyer obtain a written conflict waiver in advance of the transaction.

On the other side of RPC 1.8(a)’s disjunctive, Spencer notes in passing that deals with clients in which a lawyer takes an ownership, security or similar financial interest are still subject to the qualifier that they be “adverse to …[the]… client” to trigger the rule’s requirements. In doing so, the court observed that not all joint lawyer-client investments necessarily involve the “adversity” underlying the conflict rule — citing its decision to that effect under former DR 5-104(A) in In re Samuels/Weiner, 296 Or 224, 232-33 (1983).

The Oregon Supreme Court in Samuels/Weiner, however, cautioned that business deals with clients are “fraught with peril[.]” Id, at 232. The case law furnishes a host of examples of that peril ranging from regulatory discipline (see, e.g., In re Brown, 326 Or 582 (1998)) to civil liability (see, e.g., Roach v. Mead, 301 Or 383 (1986)). Given the extensive body of case law that serves as a very practical warning, lawyers would be wise as a practical tool of risk management to obtain a conflict waiver even if they don’t believe that one is technically required under the circumstances. If a lawyer or firm is considering investing in a client, ABA Formal Opinion 00-418 (2000) should also be on the required reading list. While not a “cookbook,” the opinion remains a standard on structuring and documenting the disclosure and consent required in the particular context of taking stock in lieu of fees.

Spencer also serves as a reminder of two related risks beyond bar discipline.

First, regulatory discipline is not an exclusive remedy. The Spencer opinion noted that the lawyer’s former client also brought a successful adversary proceeding against him in her bankruptcy case for breach of fiduciary duty stemming from the transaction and his failure to obtain an appropriate waiver. Oregon law1 has long held that the regulatory rules on conflicts reflect our underlying fiduciary duty of loyalty. In the adversary proceeding linked with Spencer, the bankruptcy court required the lawyer to disgorge his entire fee as a remedy for the conflict.2 In doing so, the bankruptcy court relied on the Oregon Court of Appeals’ decision in Pereira v. Thompson, 230 Or App 640 (2009), which explained that claims for breach of fiduciary duty are independent of asserted lawyer negligence and turn instead on whether the lawyer involved breached the fiduciary duty of loyalty by having an unwaived conflict. The bankruptcy court concluded that fee disgorgement was an appropriate remedy to address the unwaived conflict.

Second, the PLF plan contains an exclusion from coverage for business transactions falling within RPC 1.8(a) unless the lawyer uses a conflict waiver substantially similar to a PLF form and provides a copy of the executed waiver to the PLF within 10 calendar days of the date the client signs it. The PLF’s suggested waiver form includes an article by the Office of Disciplinary Counsel called “Business Deals Can Cause Problems.” Spencer again provides a cautionary example. The client in the adversary proceeding also asserted a claim for malpractice for alleged negligence in handling the matter substantively apart from the related business transaction. The bankruptcy court awarded damages on that claim as well.

As Spencer illustrates, business deals with clients are not solely the province of high tech lawyers investing in start-up clients in lieu of cash fees. Rather, most of the Oregon disciplinary cases in this area have historically been much closer to Spencer’s everyday facts than sophisticated stock-for-fees deals in the “Silicon Forest.” The practical reach of RPC 1.8(a) compared to its predecessor and the range of potential consequences if a lawyer doesn’t meet the high disclosure bar of the rule combine to make lawyer-client business deals one of the riskiest areas into which lawyers can venture. Whether a comparatively mundane business transaction or a more complex investment, the PLF’s waiver forms offer some protection. But, given the inherent dynamics of lawyer-client business deals, history teaches that even these will not eliminate risk altogether.

ABOUT THE AUTHOR
Mark J. Fucile of Fucile & Reising handles professional responsibility, regulatory and attorney-client privilege matters and law firm related litigation for lawyers, law firms and legal departments throughout the Northwest. He is a past member of the OSB Legal Ethics Committee and is the current chair of the WSBA Committee on Professional Ethics. He is a co-editor of the OSB Ethical Oregon Lawyer, the WSBA Law of Lawyering in Washingtonand the WSBA Legal Ethics Deskbook. He also teaches legal ethics as an adjunct for the University of Oregon School of Law. He can be reached at (503) 224-4895 and Mark@frllp.com.