Other People's Mistakes:
Dealing with Missteps by Colleagues and Opposing Counsel
By Amber Hollister 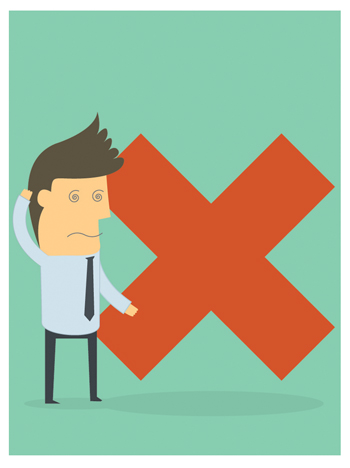 At some point during every lawyer’s career, he or she will be faced with the prospect of dealing with another attorney’s mistake or misconduct.

A recent bar counsel column, “Mistakes Were Made” (July 2014), discussed how to recover from your own mistakes. But what if the mistake is made by a colleague or opposing counsel? This column addresses ethical duties associated with dealing with the aftermath of another lawyer’s mistake, including the duty to report ethical misconduct.

Because lawyers are human, we all make mistakes. In a legal community the size of Oregon’s, it almost goes without saying that when opposing counsel’s mistakes are minor, seeking a reasonable solution that is workable for both parties is the most prudent approach.

But what if the client wants to pounce? Often, a mistake by opposing counsel will trigger a lawyer’s duty to communicate with his or her own client. Oregon RPC 1.4. After all, lawyers have a duty to keep their clients reasonably informed about the status of matters, and to ensure clients are informed enough to make decisions about how to proceed. Id. A mistake may create just such a decision point. Upon learning of a mistake, a client may be eager to play hardball.

As professionals, lawyers have discretion to determine what strategy and tactics to employ when striving to achieve a client’s objectives. RPC 1.2(a). For this reason, savvy lawyers often counsel their clients about the long-term impacts of a draconian response to a minor error, even if taking advantage of a mistake might result in a modest immediate gain. See RPC 2.1 (“In rendering advice, a lawyer may refer not only to law but to other considerations such as moral, economic, social and political factors that may be relevant to the client’s situation.”) Courts may look on hard tactics with disfavor, or the client’s reputation may be tarnished in the larger community.

Aside from explaining another lawyer’s mistake to one’s own client after discovering an error, lawyers should also consider whether it is necessary to correct the record with the court or a third party. An attorney has a duty to correct the facts or the law provided by another person if the attorney has incorporated or affirmed the mistake, and the failure to correct the mistake would mislead the court or others. RPC 3.3; 4.1; 8.4(a)(3). See Comment (1) to ABA Model Rule 4.1 (“(a) misrepresentation can occur if the lawyer incorporates or affirms a statement of another person that the lawyer knows is false”); see also In re Boardman, 312 Or 452, 456-57 (1991) (holding that a lawyer’s knowing failure to correct a false impression made by an unintentional misstatement is also a misrepresentation). If correcting the mistake would reveal a client confidence, a lawyer must seek client consent before doing so. RPC 1.6; 3.3(c).

Beyond the prohibition on knowingly affirming or incorporating the misstatements of others, lawyers have no general duty to educate other lawyers about the state of the law. If opposing counsel mistakenly omits a case that is directly adverse to the position of your client, however, the ethics rules specifically provide that you have an affirmative obligation to reveal the adverse authority to the court. RPC 3.3(a)(2).

A special rule also applies if another lawyer mistakenly reveals a confidential document or electronically stored information. RPC 4.4(b) requires the recipient of “information relating to the representation of the lawyer’s client” who “knows or reasonably should know” that the information was “inadvertently sent” to “promptly notify the sender.” See RPC 1.0(f) (defining “information relating to the representation of a client”); Oregon Formal Op No 2005-150.

Finally, lawyers who supervise other lawyers should be aware of their special obligation to take action to mitigate the mistakes of lawyers they supervise. Under RPC 5.1(b), a law firm partner, manager, or supervisor will be deemed responsible for another lawyer’s misconduct if the lawyer “knows of the conduct at a time when its consequences can be avoided or mitigated but fails to take reasonable remedial action.”

If another lawyer’s mistake amounts to ethical misconduct, it may also trigger a duty to report to the bar. As noted by Voltaire (and Spider-Man), “With great power comes great responsibility.” The benefits of being part of a peer-regulated profession are not without cost. One of these costs is that the Oregon Rules of Professional Conduct require attorneys to report to the bar when they “know” another attorney has committed a violation of an ethical rule that “raises a substantial question as to that lawyer’s honest, trustworthiness or fitness as a lawyer on other respects.” RPC 8.3(a). See also Comment (1) to ABA Model Rule 8.3 (“Self-regulation of the legal profession requires that members of the profession initiate disciplinary investigation when they know of a violation of the Rules of Professional Conduct.”).

When trying to decide whether there is a duty to report, a lawyer should consider 1) whether the lawyer “knows” misconduct occurred, and 2) whether the misconduct raises a “substantial” question about the lawyer’s honesty, trustworthiness or fitness to practice. “Knows” is defined to mean “actual knowledge of the fact in question” but knowledge can be inferred from the circumstances. RPC 1.0(h). The fact that a lawyer merely suspects another lawyer has violated the rules of professional conduct is not enough to trigger the reporting obligation. Oregon Formal Op No 2005-95. The term “substantial” refers to the “seriousness of the possible offense and not the quantum of evidence of which the lawyer is aware.” Id. (citingComment (3) to ABA Model Rule 8.3).

Lawyers have a duty to report substantial misconduct that calls into question another lawyer’s honesty, trustworthiness or fitness to practice because such concerns “directly implicate the integrity of the legal profession.” See 2 Geoffrey C. Hazard Jr. & W. William Hodes, The Law of Lawyering §64.3 (3d ed 2001). The duty to report is easily triggered by dishonest conduct such as embezzlement of client funds or making a knowing material misstatement to the court or third parties, or a conviction of a felony or a crime of moral turpitude (e.g., misdemeanor theft).

The duty to report may also be implicated when a lawyer knows another “lawyer’s physical or mental condition materially impairs the ability to represent the client” but the impaired lawyer refuses to withdraw from the representation. RPC 1.16(a)(2). Under such circumstances, there is likely a substantial question about the lawyer’s “fitness as a lawyer.” RPC 8.3(a). The reporting duty is not triggered, however, by minor violations such as “merely technical violations of the conflict of interest rules.” Oregon Formal Op No 2005-95 (citations omitted). Lawyers who are unsure whether a violation is substantial enough to warrant reporting are encouraged to contact the bar’s general counsel’s office to discuss the nature of the misconduct.

The duty to report, however, does not trump the duty of confidentiality. RPC 8.3(c). A lawyer may not report another lawyer’s misconduct if the source of knowledge of the violation is protected by RPC 1.6 or ORS 9.460(3), unless the client consents to disclosure or one of the exceptions permitting disclosure outlined in RPC 1.6(b) applies.

While there are no cases in Oregon addressing the failure to report misconduct, other states have disciplined lawyers for failure to report. For instance, an Illinois lawyer was suspended for his failure to report his client’s previous lawyer, who had converted $35,000 in settlement funds from the client. In re Himmel,  533 N.E.2d 790, 791 (1988).The court stressed that that had the lawyer promptly reported to the bar it might have protected the public from additional harm, explaining the first lawyer went on to “conver[t] many clients’ funds after respondent’s duty to report … arose.” Id. at 795. A New York lawyer was disbarred for failure to report his senior partners’ request that he make numerous payments of “illegal gratuities” to a member of court staff, and making several payments himself. In Matter of Lefkowitz, 105 A.D.2d 161, 162 (1984).

While the decision to report another lawyer’s misconduct is a difficult one, the choice will not subject the reporter to civil liability. Lawyers who report misconduct to the bar are entitled to absolute civil immunity. ORS 9.537(1); see also In re Adams, 293 Or 727 (1982) (disciplining lawyer for filing a counterclaim against a former client based on former client’s complaint to the bar about the lawyer).

Is There a Duty to Self-Report?

There is no duty to self-report ethical misconduct. RPC 8.3(a) only applies to “[a] lawyer who knows that anotherlawyer” has committed misconduct. While self-reporting is not required, the fact that a lawyer self-reported is often cited as a mitigating factor and may lead to a less severe sanction. See e.g., In re Strickland, 339 Or 595, 606 (2005) (lawyer’s “full and free disclosure” of his convictions associated with making a false report was mitigating factor); In re Allen, 326 Or 107, 127-28 (1997) (finding that the “accused made a full disclosure of the relevant facts to the bar and cooperated in these proceedings” and “demonstrated remorse for his actions”); see also American Bar Association’s Standards for Imposing Lawyer Sanctions (1991) (amended 1992) §9.32 (e) (listing “full and free disclosure to disciplinary board or cooperative attitude toward proceeding” as mitigating circumstance).

While there is no general duty to self-report misconduct, lawyers who bounce a check on a lawyer trust account are required to provide a full written explanation to disciplinary counsel of the cause of the overdraft, regardless of whether the overdraft is covered by the bank. RPC 1.15-2(l).

As Albert Einstein once quipped, “Anyone who never made a mistake has never tried anything new.” Mistakes happen. Lawyers dealing with the mistakes of other lawyers should understand the mistakes could trigger their own ethical obligations.