Breaking Boundaries:
Julie Frantz Adds a National Presidency to Her List of Firsts
By Melody Finnemore 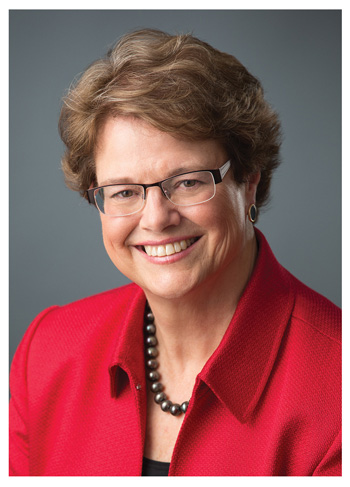 Julie Frantz’s career includes a series of firsts, the most recent of which is becoming the first Oregon judge to lead the National Association of Women Judges. The presidency is a significant honor, acknowledges Frantz, Multnomah County Circuit Court’s chief criminal judge. Even more, it is an opportunity to continue working toward social justice goals that drew her to the legal profession in the early 1970s.

As a college student during the tumultuous ’60s, Frantz witnessed confrontations over civil rights, was embroiled in the conflict over the Vietnam War and gained an awareness of other movements that would forever change the nation. The summer following her freshman year, she was an in-residence counselor and tutor in an enrichment program called Open Future. She and other counselors lived on a college campus with middle school kids from an impoverished area of Los Angeles where significant racial clashes had occurred earlier that year. Having honed her linguistic skills as an English major, Frantz believed she could affect social change through advocacy and public service. With her sights set on becoming a legal aid attorney, she worked in a restaurant for a year after graduating from Stanford to earn money for law school.

Frantz wanted to live in the Northwest to be near the coast and the mountains, while enjoying the benefits of urban life. She moved to Portland in 1972 to attend Lewis & Clark Law School. There were just a handful of women in her class, and Frantz was the only woman in her study group of five.

Following her work in what is now the law school’s Public Interest Law Project, one of her study group classmates encouraged her to join him in the Clark County Public Defender’s office during her third year. As a certified law student, she represented the indigent accused and she tried many cases. She feels very fortunate to have been hired after graduation in 1975 by the Metropolitan Public Defender’s office. In 1979, she became the first female director of the Multnomah County office.

The trial experience she gained as a public defender opened the door for Frantz to go into private practice in 1982 with a firm she greatly respected, Schulte, Anderson, DeFrancq, Downes & Carter. She specialized in civil litigation and became the firm’s first female partner in 1986, the year after her daughter was born. While the application of her trial skills in both public and private practice was similar, the shift in focus was an adjustment.

“It took me a bit of time to get accustomed to the fact that this was a business where representing the client to the best of your ability, as always, was first and foremost, but that it was also about being part of a business that was income producing,” Frantz says.

When asked what spurred her interest in becoming a judge, Frantz points to the mock trial program at Lewis & Clark Law School. In 1977, then Multnomah County Circuit Court Judge Robert E. Jones asked Frantz to assist as an adjunct professor in the trial practice class by presiding over mock trials held at the courthouse.

“I was very flattered because I’d only been a lawyer for a year and a half when he entrusted me with such a responsibility,” she says, adding that for the next three years she donned a robe most Tuesday evenings during the school term to try the cases presented by the law students before a volunteer jury, and then critiqued the students afterward.

“I found that I very much enjoyed the responsibility of trying cases as a judge. I also recognized how important it is to ensure that everyone in the courtroom is treated with dignity and respect, and that civility is observed at every turn,” Frantz says. “I have a tremendous regard for our legal system, the jury process, and the fact that we resolve our disputes in a civilized manner governed by the rule of law.”

While many of Frantz’s contemporaries supported her goal of becoming a judge, they felt there was another major milestone she needed to accomplish first. Frantz was a member of the Oregon State Bar Board of Governors and was well-positioned to become the bar’s first female president. However, she couldn’t serve as president if she was already a judge, says Attorney General Ellen Rosenblum.

“I told her, ‘Julie, we want you to be a judge, but please don’t let that stop you from becoming president of the Oregon State Bar.’ That was really important,” says Rosenblum, a longtime friend and colleague of Frantz.

Frantz calls her bar presidency and service on the Board of Governors an invaluable experience that allowed her to interact with lawyers and others across the state and, together with her colleagues on the board, address significant issues that impacted the legal profession and access to justice by society’s most vulnerable populations.

The year after she completed her presidency in 1993, Gov. Barbara Roberts appointed her to the Multnomah County District Court. The following year, Gov. John Kitzhaber appointed Frantz to the county’s circuit court, and her colleagues selected her to be president of the Oregon Circuit Judges Association in 1997.

“I find rewarding the interaction with people in the community who come into court: the lawyers, jurors, parties and witnesses,” she says. “Being a trial court judge provides the opportunity to directly engage with those in our community in the most important matters at that given moment in their lives. It is a privilege and a tremendous responsibility. I think about that every day. A lot of trust is placed in judges at all levels.

“Being a good judge requires being an active listener, detailing where appropriate in lay person’s language the basis for a ruling, and balancing compassion and accountability,” Frantz adds. “Doing so hopefully creates a sense of procedural fairness that fosters trust and confidence in the justice system and our courts by the diverse groups that make up our community.”

Adrienne Nelson, now one of Frantz’s fellow circuit court judges, recalls appearing before Frantz in 1996 during Nelson’s first trial. Nelson says she was greatly impacted by Frantz’s professionalism and understanding. “She was a really strong role model about how judges should treat the lawyers before them and how to treat the clients. She was a great place for me to start,” she says.

The pair met at various professional events and served together on nonprofit advisory boards, including Girl Scouts Beyond Bars, over the years. They partnered to support young women whose older relatives were incarcerated, encouraging them to avoid being defined personally and professionally by their relatives’ choices. Then they became colleagues on the bench, where Nelson gained an ever greater appreciation for Frantz.

“I have been thoroughly impressed by her energy and her ability to interface with so many people,” Nelson says. “It’s incredible and impressive to watch her navigate all of her roles.”

And those roles are myriad and diverse. Frantz says her work as a circuit court judge not only involves a full court docket, but internal responsibilities that involve bringing colleagues together to discuss substantive law issues and procedural changes, guiding initiatives to create policies that improve court procedures and serve the needs of the public, and dealing with crises.

Frantz also networks extensively outside of the courthouse with local, statewide and national partners in the criminal justice system to effectuate collaborative change. In 2008, Frantz led the creation of Multnomah County’s Mental Health Court, which places some offenders on probation rather than in jail if they comply with mental health treatment with the assistance of the county’s Department of Human Services team. Frantz also recently helped establish a county Veterans Docket and Outreach Program that enables, in some cases, probation with wrap-around supportive services rather than prison.

Mentorship is another important aspect of Frantz’s professional life. She works with young lawyers through Lewis & Clark Law School’s mentorship program as well as minority bar groups. In addition, she initiated Take Your Child to Work Day mock trials in partnership with Oregon Women Lawyers about a decade ago.

“It, too, is a form of mentoring because you’re reaching out to kids who are from 6 to 14 years old, and it’s their first time in a courtroom,” Frantz says, adding the youth not only witness legal proceedings but many enthusiastically participate in the mock trials during their day in the courthouse. “They are playing roles in professions they can aspire to.”

Frantz participates in — and strongly encourages other legal professionals to participate in — initiatives sponsored by the Classroom Law Project, the Campaign for Equal Justice, and other organizations that expose kids to the Constitution, shape legal skills, further access to justice and promote civics education.

“Judges need to get off the bench and be involved in activities with other parts of the legal profession,” says Frantz, who served as president of the Multnomah Bar Foundation in 2013, and on many county and state bar committees.

The wife of a retired maritime lawyer and the mother of an architect daughter and college senior son, Frantz is passionate about Habitat for Humanity. She celebrated her 60th birthday by inviting 35 friends for two days of building a home for a single mother of three in Portland. She has done projects in Ethiopia, El Salvador and other locales abroad, and is a member of the board of directors for Habitat’s Portland/Metro East chapter.

“A lot of homes we’ve worked on have been in deep southeast and north Portland. It doesn’t matter on the worksite what you do for a living. What is important is that you’re working with others to provide a mold-free, solidly constructed house for a family in your community,” says Frantz, also a member of the board of directors for the I Have a Dream Foundation. “Should it become known you are a judge, though, I think working together in the community fosters greater trust in the court and justice system.”

When she’s not working or volunteering, Frantz enjoys hiking, kayaking, traveling, attending plays and lectures, and hanging out with family and friends. Although injured knees have interfered with her love of racquet sports, another accomplishment on her list of firsts includes becoming the state’s first women’s racquetball champion in 1977.

Rosenblum, who first met Frantz while river rafting in the 1980s, calls her a loyal and fun friend with “a fantastic sense of humor.”

“She’s also a true lawyer who has never forgotten her roots, and she’s looked up to as a fabulous judge who is a big part of the community,” Rosenblum says.

Frantz’s tenure as president of the National Association of Women Judges promises to further broaden her presence in the legal community as she works to promote the group’s mission of building a diverse bench, providing mentorship opportunities, promoting civics education, improving access to justice for underserved communities, and creating strong substantive educational programming and networking opportunities for members.

Frantz’s theme for the coming year is, “Voices of Justice: Keeping the Promise of the Rule of Law Through Enhancing Judicial Diversity and Leadership.” Among the association’s goals that are particularly close to Frantz’s heart are its initiatives related to issues protecting the most vulnerable populations, in particular human trafficking and enhancing diversity on the bench. She will also work to promote the Color of Justice program that exposes minority high school kids to the legal profession, and expand the impact of the Informed Voters Project. IVP is a civics education project, which includes a video entitled “Fair and Free” narrated by Justice Sandra Day O’Connor that won a regional Emmy, to increase awareness about the importance of being an educated voter, and maintaining fair and impartial courts and an independent judiciary.

For more information about the National Association of Women Judges and its initiatives, visit www.nawj.org.

ABOUT THE AUTHOR
Melody Finnemore is a Portland-area freelance writer and frequent contibutor to the Bulletin.