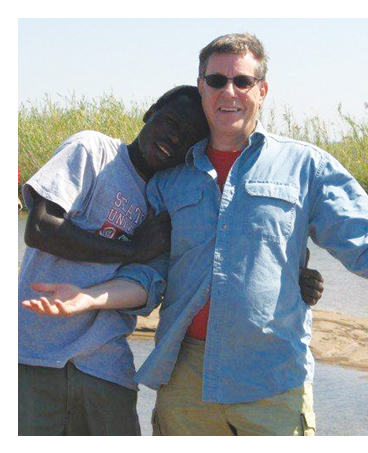 A sabbatical can present many different opportunities, from traveling abroad and learning a foreign language to accomplishing long-postponed personal projects and maybe even crossing off an item or two on the bucket list.

For Portland trial attorney Bob Weaver, a sabbatical created a chance to not only take an extended break from his career, but to trade his cell phone and computer for a shovel, a cot and some life-changing experiences in Zambia, Africa.

“I have been fascinated by what little I know of sub-Saharan Africa, and I wanted to go there in some way that I could be helpful to someone,” says Weaver, an owner at Garvey Schubert Barer whose practice consists of white-collar criminal defense, internal investigations and complex civil litigation.

While he admires attorneys who travel to other nations to provide representation or help improve legal processes, he knew immediately that he did not want to serve abroad in any kind of legal capacity. After decades of high profile cases such as serving as the chief federal prosecutor in the United States of America v. Bhagwan Shree Rajneesh, et al., representing clients like Tonya Harding and several NBA players, and big civil litigation cases, Weaver recognized that he needed the mental and intellectual break of doing something completely different from his profession.

He also relished the opportunity to unplug and disconnect from the constant barrage of emails, phone calls and documents — electronic and paper — he deals with during a typical workday.

Weaver explored working with Habitat for Humanity before ultimately connecting with a group of students, faculty and staff at Seattle University. The group, Professionals Without Borders, had already planned the trip to Zambia with the goal of providing clean water and hydropower to a village there.

Professionals Without Borders was already well-acquainted with Zambia, having done a smaller water project there several years ago. The women in the village used to go to the banks of the Zambezi River to wash clothes, and sometimes crocodiles snatched the women’s children from the riverbanks. An Italian priest who oversees the nearby parish worked with Professionals Without Borders to devise a basic pipeline and pump system from the river to tubs higher up on the bank so the women no longer had to go to the river to do laundry.

As an extension of that effort, Professionals Without Borders designed a platform that floated on pontoons and was equipped with a water wheel (similar to a paddlewheel), a generator attachable to a waterproof cable, and PVC pipe coil. Both were designed to go from the pontoons underwater to the river’s edge. The device was intended to channel water from the river up a 70-foot embankment and also provide electricity for the village. The floating platform and its power source were made of supplies that are easily accessible in Zambia, such as a washing machine motor, chains, belts and bicycle parts.

“When I first saw this, it was pretty impressive,” Weaver says. “If it worked, it could be replicated by the tribes.”

However, when the Professionals Without Borders team arrived in Zambia in June 2012, nothing worked. After plenty of tinkering and adjusting, the team of electrical engineering students and university maintenance staff were able to get it going, much to the relief and joy of everyone.

“This was as much an adventure for the tribes as it was for us,” Weaver says. “They were very anxious to see this project come to fruition — not just for the electricity and clean water — but for the lessons learned. They were quick learners and hard workers. I felt an instant bond with all the people I worked with.”

During those several weeks in Zambia, Weaver dug a seemingly endless series of ditches and utilized some basic construction skills he had acquired on jobs during high school and college. At night he enjoyed books he had brought along and, with electricity in short supply, was usually fast asleep on a cot covered by mosquito netting shortly after dark.

Chirundu, the village where Weaver primarily worked, is located at Zambia’s border with Zimbabwe and near a major bridge that crosses the Zambezi River. The bridge brings a few benefits to the village, but it also carries a steady stream of long-haul truck drivers who contribute to a significant prostitution problem.

Zambian tribal society is very patriarchal, and women are subordinated to the interests of their fathers, husbands and other men, Weaver says. Children are raised by extended families and often have more than one adult acting as their father.

“There is an AIDS epidemic in Zambia, thanks in part to impediments in the culture. Men don’t wear condoms and witch doctors tell women they won’t contract AIDS,” he says. “Education and time may change that, but it’s going to be a long haul.”

The nearby parish houses an orphanage that is filled with children, and a hospital overburdened with patients suffering from AIDS and other sexually transmitted diseases. Weaver says an Italian nun who runs the hospital explained that some of her patients are 12- and 13-year-old girls with STDs that are difficult to treat.

In addition, Zambia is extremely impoverished and half of its population is younger than 18, youth with few prospects for escaping poverty. “The people we worked with were mostly young men, and they were smart, hardworking and anxious to learn,” Weaver says. “Despite what we would regard as suffering and deprivation, most appeared to be at peace with their lives.”

The experience taught him to see his own everyday circumstances in a new light.

“If anyone ever hears me say, ‘Gee, I really wish I had this or that other thing,’ I want them to strike me dead,” Weaver says. “Life in most of Africa is primitive and little is required to navigate it.”

There were some welcome cultural encounters along the way, including a trip to Victoria Falls and a large folk festival that featured music, dancing and a host of dignitaries and tribal chiefs.

An overly starchy diet, as well as some chicken that gave new meaning to the term “free range,” left something to be desired, though it made Weaver appreciate unexpected delicacies even more.

“I wasn’t always sure what I was eating. I remember one day I got half an avocado and I thought I was in heaven,” he says.

After the Zambia project, Weaver took time for some additional travels that included actual beds, hot showers and other daily comforts. He helped a friend edit a book, and just generally enjoyed his self-imposed change of pace. When he returned to work in early 2013, he felt re-energized both personally and professionally.

“I’ve been fortunate to be always among great lawyers and great people, and in my work I felt sometimes totally drained but never bored. I’ve been very fortunate in that regard,” he says. “But this is a very stressful profession. I did not realize how tired I was until I came to a complete stop. Once I reached that point, it was pretty clear what I needed to do.

“I feel like I was able to restore my mind, my body and my soul,” Weaver adds. “I love being a lawyer and I’m glad to be back. The whole key is balance. If we let it, the profession will consume us. This gave me a chance to rebalance.”