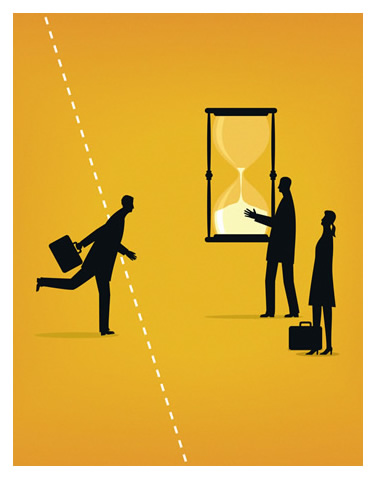 Some of the most high-stakes legal disputes are settled in the criminal law arena. In an aggravated murder trial the defendant’s liberty and life are at stake. In a trial for driving under the influence of intoxicants, the means through which a truck driver supports his or her family may be lost upon conviction. Opposing attorneys must often cross-examine children, grandparents, police officers, teachers and doctors. A public defender may feel compelled to file a motion alleging prosecutorial misconduct on one case and ask that same prosecutor for leniency on another — on the same day. Those who choose to practice in the area often feel a strong personal commitment to it and practice criminal law for their entire career. How are criminal law practitioners able to maintain their commitment to professionalism?

“Outcomes are better if the lawyers do not become a part of the conflict that needs to be resolved,” says Multnomah County Circuit Court Presiding Judge Nan Waller. “If the lawyers are showing jurors or witnesses or court observers that they are personally involved in the conflict, then that becomes part of the issue that needs resolution, too.”

The criminal process is replete with opportunities for practitioners to model professionalism. Conversely, there are always opportunities for the type of boorish behavior best displayed on your favorite television drama series.

An unscientific poll of judges reveals that by and large, practitioners of criminal law in Oregon courtrooms maintain a high degree of professionalism, but there is always room for improvement. The most common example of unprofessionalism is when the legal battle turns personal. Washington County Circuit Court Judge Oscar Garcia says that “when the deputy district attorney and the defense attorney begin to turn their attention away from the legal or factual issues, and instead focus upon the personal, or what they perceive to be distasteful tactical decisions, then those attorneys lose focus and their advocacy becomes less effective.”

This loss of efficacy may have serious ramifications. “A defendant may lose confidence in his lawyer,” says Garcia. “The defense attorney is the client’s voice — his face — interacting with the system. If that trust is lost, or if respect for the system is diminished, all outcomes may be tainted.”

Equally important is the fact that jurors look carefully at the behavior of attorneys during trial. Many studies have documented the fact that jurors respect and follow the attorneys they know to be prepared and professional. Common sense and experience tell us cases are decided on the merits, not personal disputes between the advocates.

Another ramification of unprofessional courtroom behavior is the potential effect on the court record. Jennifer Lloyd is the attorney in charge of criminal appeals at the Oregon Department of Justice. Much of her work week is spent reading the transcripts of criminal proceedings. She is a second-hand witness to many great feats of advocacy. However, she must also slog her way through a transcription of two attorneys attacking each other on a personal level, belittling the arguments made by the other side, being scolded by the judge, stuttering and stammering to make a point that neither needs to be made nor is persuasive to the issue at hand. “From a transcript-reading perspective,” she says, “if it’s nonsense, you just end up skimming over it.” When reading a transcript, Lloyd often encounters a second problem: faulty memory. “If there has been too much back-and-forth between lawyers, of if the judge had to interrupt, or literally separate the litigants, what [the lawyer] thought he or she said on a topic often doesn’t make it into the transcript. Lawyers think they made the argument, but due to emotion, anxiety, or frustration, they’re wrong; it’s not there.” Grace under pressure and not letting it get personal lead to a better record and more effective advocacy.

How does one avoid descending into the tar pit of pettiness during the heat of battle? “I just roll with it,” says one veteran criminal defense attorney. “I go into every trial with one, maybe two, issues. These are the two main points that I want to make, that I want the jury to hear and consider. I don’t have 15 or 20; I have one or two. I’m not going to get into a spitting match with anyone.”

What if a prosecutor tries to drag him into an off-topic fight about an issue that is not on his list? “We’re both advocates,” he says. “I try to stick to my issues, not lose focus, and save any retort for my closing argument.”

Two other areas of concern came up repeatedly during the informal poll of judges mentioned above – punctuality and preparedness. “Everyone is busy, particularly the lawyers that I see whose practices involve multiple counties,” says Judge Garcia. “Tardiness is never a problem if the lawyer is able to let us know ahead of time. It becomes problematic, and possibly a reflection on that lawyer’s professionalism, if it’s habitual. It shows great disrespect toward the other participants in the criminal justice process.”

Those words apply not only to court appearances, but also to business practices — like providing discovery. Every practicing attorney has felt that he or she has been “sand-bagged” by receiving discovery material or learning of a new witness on the eve of trial. For the lawyer whose delivery of such documents or information was untimely, answers to the inevitable questions (i.e., When did you know about this? Did you alert your opposing counsel as soon as possible?) will either mitigate or exacerbate the situation. For the recipient, his or her reaction will do the same. In the heat of such an incident, Retired Multnomah County Circuit Court Judge Michael Marcus once told an attorney in his courtroom that the lawyer was “so angry about the timing of this disclosure that you’re failing to see how much it could potentially benefit your case.”

Can judges, juries, witnesses, appellate attorneys, discern when a lawyer is not as prepared as he or she should be for a hearing? “Every time,” replies Waller. “Preparedness is the cornerstone of professionalism.” In an arena defined by outcomes, the wise course of action, should a litigant feel unprepared, is to seek a delay — whether that means 15 minutes or 24 hours — to get ready. “Preparation shows that the matter is being taken seriously,” says Multnomah County Circuit Court Judge Stephen Bushong, who notes, “Your reputation is bigger than any one case.” If it means momentarily taking a tongue lashing from the bench in order to be ready to argue the issues, it is worth the price. Many agree few things make a worse impression on a jury than a lawyer who doesn’t know the case or seems to be learning on the fly. Jurors respect and respond to confidence and commitment to one’s case. That only comes with preparation.

Written communication is also an area that is ripe for important displays of professionalism. Examples ranging from trial memoranda to email messages are places where tone is important. Politeness helps keep the lines of communication open and avoids unnecessary conflict. In writing as in person, personality clashes often lead to wasted time.

Unnecessary hostile or aggressive language often serves as extra motivation (or provocation) for an opponent. In written work submitted to the court plain language keeps judges focused on the real issues in a case instead of creating the feeling of needing to spend time controlling the attorneys.

A relatively recent forum in which a criminal lawyer’s commitment to professionalism may also be put to the test is his or her use of social media. It is axiomatic that lawyers will use social media for business and for pleasure. Yet there are also pitfalls. Does the content of someone’s Facebook post or tweet, even when broadcast to a finite group of friends or acquaintances, affect that person’s reputation for professionalism? Is expressing joy over a win, disappointment over a loss or disgust about an opponent’s tactics, on line wise? There are no simple answers to this evolving issue. It is sufficient to remind lawyers (and to quote the movie “The Social Network”) that “the Internet is not written in pencil… it’s written in ink.” Think twice before patting yourself on your virtual back by gloating about “taking down” a violent criminal, or referring to witnesses for the prosecution as “pigs.” Your “friends” have friends, and your tweets may be re-tweeted. If you wouldn’t say it in court, why write it and make it available to anyone with a Wi-Fi-enabled device?

Criminal law practitioners are public servants. Both sides work to protect and defend the Constitution of the United States and the Constitution of the State of Oregon. Our caseloads are large and our timeline is short. We operate under an order to clear 90 percent of our cases within 90 days of charging. Keep in mind that the lawyer you are litigating against today, you will be negotiating with tomorrow, and you may see him or her in line at the grocery store on Sunday. In every aspect, interact with that lawyer with professionalism.

ABOUT THE AUTHOR
Jeff Howes has been an assistant district attorney for Multnomah County for 19 years and currently serves as the first assistant to the district attorney. John Connors was county director for the Metropolitan Public Defenders Office in Portland from 1990 to 2011, and is currently an assistant federal defender in San Juan, Puerto Rico.