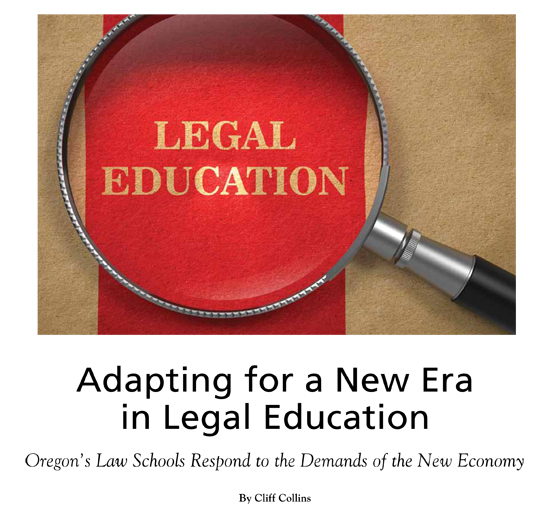 The traditional ways of training and placing new lawyers continue to change as law schools develop programs and initiatives to help students afford an education and begin their careers in a tight job market.

Oregon’s three law schools have taken up some ideas being tried elsewhere — emphasizing externships and clinics, encouraging networking — but they also are putting their own twist on creative approaches such as shortening the total length of undergraduate and graduate education and assigning first-year students to a mentor.

These and other steps come at a time when the American Bar Association recently issued a report calling for innovation in law school education and reducing the cost of obtaining a law degree.

“The predicament of so many students and so many recent graduates who may never procure the employment they anticipated when they enrolled in their law schools is a compelling reality that should be heeded by all who are involved in our system of legal education,” concluded a report by the ABA’s Task Force on the Future of Legal Education, released in January 2014.

The days when law schools encouraged students to concentrate on academics now and think about careers later are waning rapidly. According to representatives of Oregon’s law schools, combining education and experience and exposing students early to practical knowledge of how to network, find jobs and establish a practice are the new points of emphasis.

Beginning in the first year, Lewis & Clark Law School is “preparing students for work after graduation,” says Libby Davis, associate dean of career and professional development and alumni relations. “We focus on the importance of getting work experience while they are in law school and giving them information about how to actually find jobs.”

“The most important thing we do is we have a single, unified approach to make sure we place our students as best we can,” says Willamette University College of Law Dean Curtis Bridgeman. In 2012 and 2013, Willamette had one of the highest graduate placement rates on the West Coast for full-time, long-term jobs that require or prefer a J.D. degree, he says.

“We try to expand experiential opportunities” and are “doing everything we can to try to make law school as affordable as possible,” says Rebekah Hanley, assistant dean of the Center for Career Planning and Professional Development at the University of Oregon School of Law, noting that 84 percent of last year’s graduating class participated in a clinic or externship.

This is the second year that first-year U.O. students have been offered a one-credit professional preparation course to “learn more about the opportunities out there” and where their own skills and attributes might best fit, Hanley says. The intent is to help students focus on their priorities and set short-term and long-term goals. Students are reminded that they should start seeking summer associate positions as early as January of their first year.

Clinics provide opportunities for students to do legal work for clients and get academic credit for that work, she explains. An example would be a small-business clinic, in which a business that cannot afford to hire an attorney benefits from assistance from a law student working under the supervision of a faculty member.

Contingent on ABA approval, U.O. is planning to give students the opportunity to complete their full third year of law school in Portland.

“Launching a full-year academic program in Portland represents a significant and strategic investment of our law school’s resources, one that I am certain will pay meaningful institutional dividends both in the short and long term,” says Mohsen Manesh, an assistant professor who will co-lead the Portland program.

Manesh points out that U.O. has had a Portland externship for some time, but few students took advantage of it because it is offered for only a semester, which many considered too short a time to relocate and then return to Eugene. With establishment of a full-year program, he hopes more students will seek externships in Portland to enhance their “professional development skills for post-graduate employment.”

The intent is to launch the program in fall 2015 or spring 2016. U.O.’s plan has elicited excitement from students, and especially from practicing attorneys in the Portland area, he says.

Willamette’s mentorship program allows first-year students the option of requesting a mentor, and of 126 new students in 2013, 117 chose to do so. The program pairs students with approximately 150 practicing attorneys and judges in the community, who serve as mentors throughout the students’ three years.

“That’s one of the keys to getting a job: to be able to connect with a lawyer in practice,” says Bridgeman.

Willamette also has launched what it calls its 3+3 Program, which enables qualified students to save time and money by earning their undergraduate degree and J.D. in six years instead of the usual seven. Students spend their first three years on the undergraduate program’s campus pursuing a major in one of the approved 3+3 degree tracks. The last three years are spent at Willamette’s College of Law.

Students are able to complete their education in a shorter time, easing their debt load while gaining an extra year of earning power after they graduate from law school, Bridgeman explains. For the undergraduate portion, the law school has an arrangement with Willamette’s College of Liberal Arts, Oregon State University and, starting in August, the University of Alaska Anchorage.

“People sometimes think the 3+3 Program is just about skipping a year of college, and that’s one benefit because it helps to ease the financial burden; but we want it to be a real integration of their law school education and their undergraduate education,” Bridgeman says. “Education is getting so expensive; it can cut down on some of the cost and get that student in the workforce sooner.”

Willamette also has streamlined its externship program to provide students with more “real-world” experience, he says. Starting this year, the program was revamped to offer both full-time and part-time opportunities to students year-round.

Students are paired with attorney supervisors for hands-on legal experience in offices as far away as China or as close as the Oregon Capitol. Willamette’s proximity to the capitol, state agencies, courts and the Legislature — all of which have accepted Willamette law externs for unpaid, semester-long assignments for academic credit — have contributed to the program’s popularity with students.

Externs work in their assigned positions for academic credit: three or six credits for part-time, nine for full-time work. They also attend a two-hour class taught three times a semester. Externs who are out of town participate via a video link. In addition to samples of work performed on the job, externs must submit class assignments and weekly written reflections on how they are learning and changing during the semester. Bridgeman says the reports “are intended to get students thinking about the type of legal career they want, what makes a good, ethical, professional lawyer, how to focus on clients and understand their needs, and how to use the law to solve clients’ problems.”

The program is designed to make Willamette graduates more attractive to employers by gaining some legal work experience and saving employers time and money they would otherwise need to invest in training a fresh graduate. The program also helps students experience different work environments and law specialties, increasing the likelihood that they will find a position that is satisfying and rewarding, he says.

A one-day “boot camp” is another program Willamette has developed to help new law students begin preparing for job hunting and career development from the get-go, Bridgeman says. Established attorneys come in and speak about professionalism, and students receive presentations on resume writing and interviewing techniques.

“We are a small school,” he says. “This is a huge advantage to us because we get to know our students. And we have a large alumni network for students to draw on.”

Over the past two years, Lewis & Clark Law School has implemented several initiatives to help prepare students for work after graduation, says Davis. The school assigns each new beginning law student to a faculty adviser to serve as a mentor. From their first day in school, students are encouraged to begin thinking about what they plan to do in the long term, she says.

“The faculty as a whole has really engaged in the employment issue to a degree that is unusual,” Davis says. Faculty members are not compelled to, but 40 volunteer to serve as coaches and mentors, helping students by holding mock interviews and teaching them how to network, she says.

The school also now offers full-semester externships, and she often encourages students to seek one in a geographic area where they hope to live and work after passing the bar. One change is that these externships, for which the student receives academic credit, now can be taken in the final semester.

In addition, Lewis & Clark has added new programs to help recent graduates with placement and practice setup. Last year the school established a public interest fellowship initiative with nonprofit organizations, where new graduates can work and “receive at least a reasonable salary,” with the possibility of gaining a permanent position, says Bill Penn, the school’s director of public interest law.

The second new program is the Solo Practice Initiative, to assist “people who are starting their own practice, with general practice knowledge to help them get a good start,” he says. In this program, held at two different office spaces — one in downtown Portland and one in Hillsboro — certified public accountants donate their time to teach new attorneys how to establish bookkeeping and accounting systems in their practice; current sole practitioners talk about topics such as marketing or working with the county court system; and new lawyers are made aware of resources available to them such as the Oregon State Bar Professional Liability Fund’s Personal and Practice Management Assistance program, which helps lawyers set up their offices and systems.

“We’ve attempted to have some educational experiences that will be similar to what they will experience in starting up a practice,” Davis says. “Getting work experience and building contacts are a vital part of what they do here.

ABOUT THE AUTHOR
Cliff Collins is a Portland-area freelance writer and frequent contributor to the Bulletin. Reach him at tundra95877@mypacks.net.