﻿A Worthwhile Exchange:
The OSB's Member in Ecuador
By Juan J. Aguiar 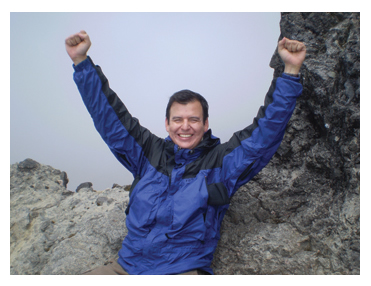 A long-standing relationship between Oregon and Ecuador has flourished for nearly 20 years since the Willamette University College of Law and the Pontificia Universidad Católica del Ecuador (PUCE) began to exchange law students and otherwise collaborate in 1995, thanks to the efforts of professor James A.R. Nafziger, Willamette’s director of international programs and the founder and director of the Quito-Salem program ever since.

I was the lucky beneficiary of the first student exchange made that year, receiving at home two students from Willamette and paying for their tuition in Ecuador, in exchange for attending my first year of American law school in 1996-97. I thus met Adam C. Hardwicke and Rachel Game in Quito, and we had a great time getting to know each other and talking about law both in Ecuador and in the United States, prior to my trip to Oregon. It would not only be my first trip to the United States, but my first trip to an English-speaking country. When I arrived in Salem, I was 20 years old.

Unlike the United States, the study of law in Ecuador is an undergraduate program that used to last five years, and I was then in my third year of Ecuadorian law school. So first I had the culture shock, then the American law-school shock, then the first-year-of-American-law-school shock. I spent long hours reading cases, with the help of both a thick English-Spanish dictionary and Black’s Law Dictionary. And I loved it. I would not have changed it for anything. I became friends with my carrel’s neighbor, Fan Xiaoling, a foreign student herself from China. We were both among the few foreign students of the class.

The semester started wonderfully sunny. Being from the equator, I was not familiar with the seasons, and I was in awe of having sunlight until 8 or even 10 p.m. in August during the summer. Then, one day, the rain began. It almost felt like the scene in the movie “Forrest Gump” when the rain starts in Vietnam and does not stop for months. That was my introduction to the American Northwest.

Crazily enough, I survived the first semester of law school in the top third of my class, having enjoyed almost every outdoor excursion organized by Willamette’s international student office (mostly undergraduate students, closer to my age!). For the spring semester I figured I would dedicate myself more to study and less to getting to know the surrounding areas, but that did not result in better grades unfortunately. The lesson learned was that one needs to relax as much as one needs to work.

At the end of the school year, I had so enjoyed my time at Willamette that I did not want to leave. But I needed to finish my Ecuadorian program and did so in 1999. Having survived the first year of law school in the U.S., I looked for programs in Oregon, and thanks to professor Nafziger, I was able to return to Willamette.

The next three years (from 1999 until 2002), I spent pursuing the certificate in dispute resolution (CDR) and the JD/MBA program, all the while encouraging American and Ecuadorian students to participate in the exchange program. Having been the first exchange student, I set in motion a program that has thrived ever since, with several American and Ecuadorian students participating in it, including Rene C. Holmes, who stayed with my family in Ecuador also, and Santiago Almeida, a classmate of mine at PUCE.

Through the CDR training, I volunteered as a mediator for the Marion County courts; and through Willamette University’s Public Interest Law Project, I was also able to get some experience in Marion-Polk Legal Aid Service in Salem.

Curricular practical training allowed me to work as a law clerk for Bennett, Hartman, Morris & Kaplan in Portland during my last year of the joint-degree program. Adrienne Nelson interviewed me, and once I was on board, I worked also with Gregory Hartman, Mike Morris, Hank Kaplan, Tom Doyle, Nelson Hall, Aruna Masih and Mark Johnson Roberts, mostly in matters related to labor and employment law, civil procedure, contracts and family appeals.

I took and passed the bar on my first try, but shortly after, during a visit back home, I interrupted my optional practical training due to a family emergency. My abrupt return to Ecuador meant that I was suddenly in private practice almost fresh from law school, so I figured I would enter the field of U.S. immigration law, to help those Ecuadorians whose visa applications had been denied, to figure out why this had happened and whether there was something that could be done about it.

It helped that the American consul at the time was an Oregonian. This was shortly after 9/11, so I was still able to meet and talk with her on several occasions.

I just recently thought to write these reflections because I am pretty sure I probably am the only Ecuadorian member of the Oregon State Bar; certainly the only one living in Ecuador. Perhaps my story may be of interest to other members of the bar.

ABOUT THE AUTHOR
Juan J. Aguiar is a member of the Oregon State Bar and also an Ecuadorian attorney who lives and practices in Quito, Ecuador. He recently started a blog in Spanish about Oregon law, available at http://derechode oregon.blogspot.com. Contact him at juan.aguiar75@gmail.com.