Maverick of the Senate:
Remembering Wayne Morse, an Oregon Original
By Abbie Stillie 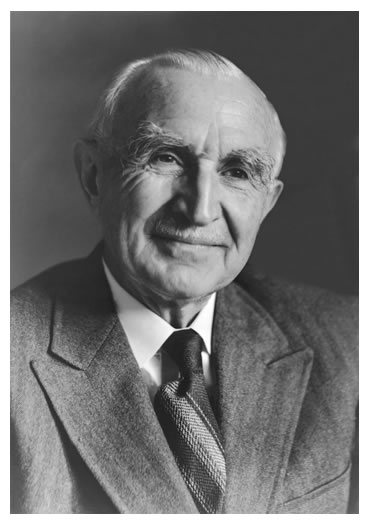 Fifty years ago this August, President Lyndon B. Johnson presented the U.S. Congress with the Southeast Asia Resolution, better known as the Gulf of Tonkin Resolution. The Johnson administration had been fine-tuning drafts of this resolution for months, as the situation in Vietnam grew more and more volatile. In early August, the U.S. Navy reported that two U.S. destroyers were attacked by North Vietnamese torpedo boats. The destroyers were not damaged — in fact, documents later unclassified showed the attack may not have even happened. However, Johnson and his administration saw it as an opportunity to take action.

“...I have concluded that I should now ask the Congress, on its part, to join in affirming the national determination that all such attacks will be met, and that the United States will continue in its basic policy of assisting the free nations of the area to defend their freedom,” Johnson said in introducing the joint resolution to Congress.

The resolution would, in effect, authorize the president to use military force without a formal declaration of war by Congress.

After careful consideration, most members of both houses had determined they should accede to the president’s wishes and vote in favor of the resolution. Sen. Wayne Morse of Oregon, however, had many misgivings. Nicknamed the “Conscience of the Senate” and known for his intractable adherence to his convictions, there was little chance Morse would cave to peer pressure and allow the resolution to pass without a fight.

Born in 1900 in Wisconsin, Morse grew up in a progressive household and was influenced by the ideas of Wisconsin politician Robert “Fighting Bob” La Follette. He and his high school sweetheart, Mildred Downie, both attended the University of Wisconsin. After college, Morse and the newly minted Mrs. Morse moved to Minnesota, where Morse had been hired as a speech professor and debate coach. Morse had been an award-winning debater in high school and college, and it was a skill that he carried with him throughout his political career. (Known for his long speeches on the Senate floor, Morse holds the record for the third longest filibuster, at 22 hours and 26 minutes.) While at the University of Minnesota, Morse earned his law degree, and in 1929 was hired as an assistant professor at University of Oregon School of Law. Rising quickly, he became the youngest dean of any ABA-accredited law school in the country at age 30 and finished up his doctorate in law from Columbia University.

During this time he also discovered a knack for arbitration, beginning with a Portland labor dispute involving the Ferryboatmen’s Union. He was a popular arbitrator, known for his fairness and careful interpretation of contracts.

Despite arbitration and government work that often took him out of state, Morse remained dean of the law school until 1944, when he resigned to run for U.S. Senate. After ousting incumbent Sen. Rufus C. Holman, Morse made a name for himself in the Senate as a champion of progressive causes such as access to education, civil rights and labor rights. As someone who followed his own convictions rather than those of his party, Morse lost favor with the Republican Party after several years and announced himself an independent in the 1953 session. By 1955, he had aligned himself with the Democrats. However, he still wasn’t opposed to standing alone when his principles warranted it, as they did that day in August 1964.

Morse had predicted the eventuality of Johnson’s resolution as many as 10 years earlier. In Wayne Morse: A Political Biography, Mason Drukman writes that in 1954, Morse said in an Oregon speech that “the potentialities of the Indo-China problem are even more grave than the dangers of Korea.” That same year, when others thought the U.S. should help the French in their struggle to maintain control in Vietnam, Morse told them the “next time we go to war we will find that we were plunged into it by events, and then the Congress will be called upon to draft a declaration of war, simply to make it legal.”

Morse was not a 20th century Nostradamus, though. His predictions came from his extensive knowledge of foreign policy and Southeast Asia politics and history (as well as possibly his Pentagon connections). As chair of the subcommittee on Latin America, “he had watched foreign policy in action — dictators being propped up, the use of force when he felt diplomacy would have worked much better,” said Margaret Hallock, director of the Wayne Morse Center for Law and Politics. Morse also had undertaken the task of learning as much as possible about Southeast Asia, particularly the terms of the treaty that ended the French-Indochinese War. “He felt that the U.S. would not win a ground war in a country where they did not know the customs, terrain or culture,” Hallock said.

On Aug. 7, 1964, Morse spoke for nearly two hours on the Senate floor laying out his opposition to the resolution. While Morse objected to the U.S. engaging in a land war in Asia because of its “sheer stupidity,” as he put it, he had another reason to be so opposed to the Gulf of Tonkin Resolution — it violated the Constitution. Morse “was a constitutional law scholar and one of the first to claim that Congress was ceding its war powers to the executive with the Gulf of Tonkin Resolution,” said University of Oregon’s former president and current law professor Dave Frohnmayer.

Morse said that the resolution violated the Constitution not only by giving the president the power to authorize the use of military force without declaring war, but also by sending in troops to engage in warfare without a declaration of war by Congress. “...[N]o war has been declared in Southeast Asia, and until a war is declared, it is unconstitutional to send American boys to their death in South Vietnam, or anywhere else in Southeast Asia,” Morse told a reporter. “I don’t know why we think, just because we’re mighty, that we have the right to try to substitute might for right.”

When the Senate voted that day, the resolution passed with only Morse and Sen. Ernest Gruening of Alaska in opposition. Morse was the only one to speak against it on the Senate floor. It had already passed unanimously in the House.

“I believe that within the next century, future generations will look with dismay and great disappointment upon a Congress which is now about to make such a historic mistake,” Morse predicted.

With his vote, Morse became a hero for the anti-war movement. He continued his dissent against the war in Congress and in public, despite pushback from the White House and many press outlets. However, his focus on ending the war in Vietnam took its toll on his political career. In 1968, Morse lost his Senate seat to Robert Packwood, who said Morse was too preoccupied with the war to pay attention to the needs of the people in Oregon. Morse died in 1974, in the middle of a campaign to reclaim his Senate seat.

The Gulf of Tonkin vote, though it was repealed in 1971, has had a lasting effect on the U.S. In addition to its role in the escalation of the Vietnam War, the resolution set a precedent for delegation of war powers that the country has been grappling with since.

The Wayne Morse Center for Law and Politics, along with the Oregon Historical Society and the World Affairs Council of Oregon, is commemorating the anniversary of the vote with the Wayne Morse Legacy Series.

“We felt like the Gulf of Tonkin vote was a main turning point. It signaled the shift from covert actions to overt war that changed our country forever,” said Hallock, who spearheaded the planning of the series.

The series, which is free and open to the public, began with a talk by U.S. Sen. Ron Wyden of Oregon on March 18. The series continues with more events in Portland, Eugene and Washington, D.C., through October 2014. It highlights Morse’s dissent on the Gulf of Tonkin Resolution and shows the continuing relevance of his principles to modern-day issues.

“Wayne Morse was prescient on many matters of foreign and military policy. The issues of war powers and when to use force abroad remain relevant today,” notes Frohnmayer, who is on the steering committee that helped Hallock choose topics for the series.

While some events in the Wayne Morse Legacy Series are specifically about what happened in Vietnam, others deal with the related topics that particularly concerned Morse — government transparency, war powers, secrecy and intelligence. “Much of Senator Morse’s battle against excessive national security secrecy resonates in today’s interactions between the congress and the executive branch,” Wyden said in his March 18 lecture on “National Security, Civil Liberties and the Surveillance State.”

An upcoming highlight of the series is “The Echoes of Vietnam” on Sept. 4 in Portland. It features Daniel Ellsberg, who released the Pentagon Papers, classified documents related to the U.S. involvement in Vietnam.

Were Wayne Morse in the Senate today, he would likely be voicing serious concerns about national security, foreign policy and war powers, Hallock said. “It is like déjà vu — there is a certain symmetry to the issues and the nature of the debate.”

ABOUT THE AUTHOR
Abbie Stillie is the communications coordinator for the Wayne Morse Center for Law and Politics at the University of Oregon.