Mistakes Were Made:
Regaining Your Stride After a Misstep
By Helen Hierschbiel 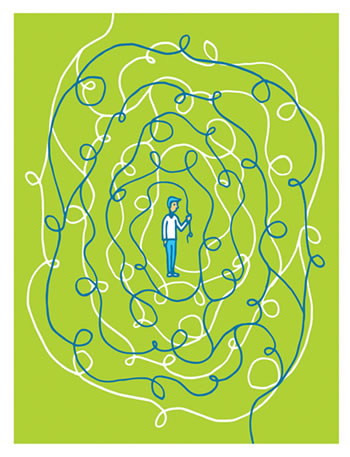 Imagine this: You’ve just blown a statute of limitations or other critical deadline. What now? You may chastise yourself, wondering what kind of incompetent lawyer you must be for making such a big mistake. You may consider who else you could blame for the error. You may feel horrible for the client and immediately want to confess and make amends. At the same time, you may worry about a malpractice claim, ethics complaint or losing your job.

None of these reactions is unusual. Like other professionals with type-A personalities, lawyers tend to be perfectionists. We are supposed to fix people’s problems, not create them. And thus, when we make mistakes, it is easy to become paralyzed by fear and self-doubt. What should we do instead?

First, remember that you are not alone. You may strive for perfection, but no one is perfect. Mistakes are part of being human.

Second, ask for help, preferably from someone whose judgment you trust. Given your likely emotional state, you may not be in the best position to exercise good judgment. Sharing your situation with someone who can help you determine the next steps also goes a long way to alleviating the fear and paralysis. Be mindful of your duty of confidentiality, however. If you want confidential help, consider calling one of the Oregon Attorney Assistance Program or Professional Liability Fund. In fact, PLF may require that you notify them of your error.

Finally, as the following cases illustrate, don’t compound your mistake by delaying your response, lying about it or ignoring it.

In addition to perfectionism, procrastination seems to be another common affliction for lawyers. Thus, neglecting to deal with the aftermath of a mistake is a common reason for lawyer discipline. In re Obert, 336 Or 640 (2004) teaches the potential consequences of a lawyer delaying his response to making a mistake. The lawyer missed a filing deadline, causing the client’s appeal to be dismissed. The lawyer did not immediately inform the client, but instead began legal research to determine whether the appeal could be reinstated. After concluding that the appeal could not be reinstated, the lawyer cut off all contact with the client, refusing to return phone calls or respond to correspondence. The lawyer did not inform the client of the development until five months after the case had been dismissed. At the disciplinary hearing, the lawyer testified that he was too ashamed and embarrassed at the time to admit to his client that he had failed him.

Unfortunately for the lawyer, the court determined that the lawyer’s conduct constituted not only neglect but also a misrepresentation by omission of a material fact. In sum, the court stated that “a lawyer effectively jettisons his or her fiduciary responsibility to safeguard a client’s confidence and trust when the lawyer knowingly withholds from a client the all-critical fact that the court has spoken and the client’s case is over.” Id. at 649.

In re Obert was decided under the former Code of Professional Responsibility, which did not include a specific duty of communication. Oregon RPC 1.4(a), however, makes explicit lawyers’ duty to keep clients reasonably informed about the status of a matter. Because of this duty, lawyers must share good and bad news with clients.

Lawyers can compound their sanctions for neglect by lying about their mistakes. Two cases are instructive. In In re Jackson, 347 Or 426 (2010), the lawyer was disciplined not just for neglect in his handling of a dissolution of marriage case, but for lying to the court about the reason for his delay in scheduling an arbitration and for not being prepared for a settlement conference. His misrepresentations to the court resulted in a more severe disciplinary sanction than had he been disciplined for neglect alone.

Similarly, in In re Cullen, 23 DB Rptr (2009), the lawyer added to his disciplinary trouble by lying. The lawyer failed to take any action on his client’s personal injury law suit, causing the court to ultimately dismiss the case for lack of prosecution. Thereafter, rather than notifying the client about the dismissal, the lawyer lied, telling the client that he was trying to determine the status of the case. Again, the lawyer’s sanction was increased because he was cited not just for neglect but for misrepresentation, too.

Do You Have to Withdraw?

In In re Knappenberger, the lawyer had represented his client in a dissolution of marriage proceeding. The lawyer filed an appeal of the dissolution judgment. The opposing party filed a cross-appeal but also moved to dismiss the original appeal based on an alleged procedural defect in service. The lawyer defended the motion but lost. Although the lawyer notified the client of the motion to dismiss, the lawyer did not notify the client of a potential conflict or obtain his client’s informed consent to continue the representation.

In evaluating whether the lawyer had a personal interest conflict that would require the client’s informed consent to continue the representation, the court looked to the text of DR 5-101(A)(1), the predecessor of RPC 1.7(a)(2). It provides that a conflict exists “if the exercise of the lawyer’s professional judgment on behalf of the lawyer’s client will be or reasonably may be affected by the lawyer’s own financial, business, property, or personal interests.” To that end, the court considered whether the lawyer’s interests in minimizing his service-of-process error and avoiding a potential malpractice claim would have affected or reasonably may have affected the exercise of his professional judgment on behalf of his client.

In deciding that not every lawyer error would impair the lawyer’s judgment on behalf of the client, the court explained:

Many errors by a lawyer may involve a low risk of harm to the client or low risk of ultimate liability for the lawyer, thereby vitiating the danger that the lawyer’s own interests will endanger his or her exercise of professional judgment on behalf of the client. Even if the risk of some harm to the client is high, the actual effect of that harm may be minimal, or, if an error does occur, it may be remedied with little or no harm to the client. In those circumstances, it is possible for a lawyer to continue to exercise his or her professional judgment on behalf of the client without placing the quality of representation at risk.

Knappenberger at 22-23. Ultimately, the court determined that the error in that particular case did not give rise to a personal interest conflict. The court reasoned that at the time of the motion, the lawyer believed that it had little chance of success and there was no evidence to suggest that his belief was unreasonable. Moreover, because of the opposing party’s cross-appeal, the lawyer’s error did not foreclose the possibility of lawyer’s client ultimately prevailing on the appeal. Consequently, the court found the risk of malpractice liability was remote, thereby reducing the likelihood that the lawyer’s own interests in avoiding malpractice had in fact impaired the lawyer’s exercise of professional judgment on his client’s behalf.

If you are trying to decide whether you have a self-interest that requires you to withdraw, you should seek the advice of a person you trust. It is always a good first step to contact the OSB Professional Liability Fund when deciding whether to continue a representation or withdraw. The general counsel’s ethics hotline can also provide an opinion on whether you have a conflict that would necessitate withdrawal.

If you have made a mistake in your practice, remember first and foremost that everyone makes mistakes. A true professional does not claim perfection, but acknowledges mistakes, takes responsibility for them and responds promptly and appropriately. As Alice Cooper said, “Mistakes are part of the game. It’s how well you recover from them that’s the mark of a great player.”