A Different Kind of Pro Bono:
Two Lawyers Work to Give Ex-offenders a New Start
By Cliff Collins 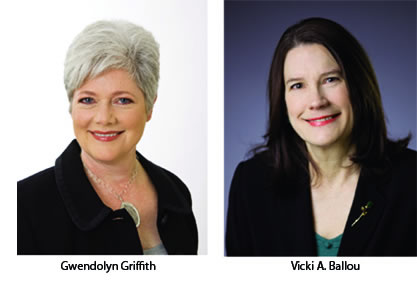 When Gwendolyn Griffith speaks about the CLiF Project with individual attorneys or before groups of lawyers, the common reaction she draws from them is disbelief.

Either that or lawyers think she is flat-out mistaken when she tells them that Oregon places juveniles who are adjudicated for a felony sex crime on the sex-offender registry for the rest of their lives.

But Griffith, a tax lawyer with Tonkon Torp, is correct in her assertion. Not only that, Oregon is one of just six other states that follow this procedure, which critics believe is overly harsh punishment for juvenile offenders who have been rehabilitated and pose no threat to the public.

Griffith and firm colleague Vicki A. Ballou, an intellectual property lawyer at Tonkon Torp, both saw what they perceived as the injustice of permanently registering people who often were as young as 12 to 14 when they committed a single act. As a result of that stigma, they find themselves as adults being denied housing, jobs, military service, college or attendance of school events for their children.

“The stereotype in society is, once a sex offender, always a sex offender,” but studies don’t bear that out, Ballou says. Youth who complete treatment through the Oregon Youth Authority experience a recidivism rate of only 4 percent, Griffith adds.

Thus, the two attorneys banded together in 2011 to create the CLiF Project, which stands for Changing Lives Forever. They collaborated with the Portland nonprofit public interest law firm Youth, Rights & Justice to sponsor a pro bono program that recruits lawyers from Tonkon Torp and other law firms in Portland and around the state.

After screening by Youth, Rights & Justice, followed by Griffith and Ballou, appropriate clients who are on the lifetime registry and want relief are matched with volunteer attorneys. These lawyers meet with their clients and discuss how they can — under ORS 181.823 — prepare for a hearing to determine their eligibility for relief from registration.

“In Oregon, it’s easy to get on the registry, and historically it was almost impossible to get off,” explains Griffith. From the mid-1990s, when Oregon enacted legislation to require permanent registration for juvenile sex offenders, to 2011, relief was possible only within five years after the youth was released from supervision. But since 2011, after advocacy from Youth, Rights & Justice, the Legislature modified the statutes to allow petitioning for relief before and after that five-year period. But the process is complex, and many eligible clients don’t have the knowledge or resources to go through it on their own, Griffith says.

She proposed that Tonkon Torp use a practice group model, dedicated to the CLiF Project as a specialized pro bono effort, in order to be able to help lawyers from within the firm and from other firms around the state learn how to assist young people seeking relief.

The co-directors dubbed volunteers “CLiF dwellers,” and they emphasize that lawyers in any location or area of practice can tap into CLiF’s resources: a set of documents and forms related to the effort, as well as support from experienced volunteer CLiF lawyers who can answer questions and provide guidance. Tonkon Torp also holds monthly lunches for volunteer attorneys to hear speakers on topics relevant to these cases and to share experiences and advice.

“It’s got great potential to be replicated for other pro bono practice groups,” Ballou says. Griffith says no particular specialty of law addresses the issues surrounding relief from registration, so providing information and support to lawyers willing to help them is a practical approach that removes many of the barriers attorneys face when wanting to do pro bono work.

“Lawyers hate not knowing what to do” when handling pro bono cases, adds Ballou. “We get together and share experiences,” so participants never have to feel alone or uninformed when volunteering for the project.

Both Griffith and Ballou hail from the South, where — especially during the era each entered law school — the law was not a profession women were expected to consider. Griffith, raised in a tiny town in east Tennessee, had an advantage in that her grandfather was a lawyer and her mother was a physician. When she was in a second grade show-and-tell, Griffith remembers her teacher questioning her for saying her mother was a doctor, correcting her that her mom instead must be a nurse. Her mother saved the day by subsequently appearing before the class to talk about being a doctor.

Griffith graduated from Rollins College and obtained her J.D. at Stanford Law School. She began her legal career at Akin Gump in Dallas, then taught law school in Florida and at Willamette University College of Law. Griffith next practiced for around a decade in Eugene with Speer Hoyt, before joining Tonkon Torp in 2008. She has been named to “Best Lawyers in America” from 2012 to 2014 for tax law and from 2010 to 2014 for trusts and estates. She co-authored Family Wealth Transition Planning, published by Bloomberg in 2008.

Ballou, a native of Little Rock, Ark., “had no idea women could be lawyers” until she attended Walla Walla College, and two of her classmates went on to attend law school. Ballou opted to begin her career teaching high school English. After she married and the couple had two children, she decided to go to the University of Texas at Austin School of Law. She clerked at Tonkon Torp during her second year of law school and then joined the firm at age 36. Ballou was named to “Best Lawyers in America” from 2007 to 2014 for copyright law and from 2007 to 2014 for trademark law, as well as to “Chambers USA: America’s Leading Lawyers” from 2009 to 2013 for intellectual property.

Both women became involved in the CLiF cause because they were “appalled that Oregon puts juvenile sex offenders on the list for life,” says Griffith. “This is something we can do something about.” Fortunately, she adds, that’s the same reaction she gets when she explains the problem to other lawyers. They tell her, “ ‘That can’t be that we keep them on the registry for life. That’s wrong.’ They realize this is something they can change.”

Typical CLiF clients are about 26 years old, most (but not all) are young men, and all are low-income. Most are from dysfunctional families who didn’t establish boundaries or model appropriate relationship behavior, and some clients had anger or impulse-control problems as teens.

Candidates CLiF considers get carefully screened, and only those who have shown a good, demonstrable track record since their offense are selected for seeking relief through the project, Griffith says. The legal procedure is complicated, and many young people who would be suitable candidates can’t afford a lawyer to help them navigate the system.

Every year, more youth are added to Oregon’s registry than obtain relief. According to Mark McKechnie, executive director of Youth, Rights & Justice, between 2010 and 2013 the number of people registered due to a juvenile adjudication increased from 2,400 to over 3,000.

“This is in spite of the clear and overwhelming evidence collected over the last 20 years that these youth typically do not re-offend later in life and that juvenile registry laws have no discernible benefit in terms of protecting the public,” he says.

McKechnie calls the collaboration with the CLiF Project “a dream partnership.” He says the lawyers and paralegals who volunteer are serious about the cases, “methodical in their work, and dedicated to making a difference. They are helping clients who very much need and deserve it, but these are people who don’t otherwise get much sympathy or understanding from the public due to the ‘sex offender’ label that has been imposed upon them. The CLiF Project understands that kids make mistakes, but they often grow up to be responsible adults, just like the rest of us. We are very grateful for the thousands of hours that Tonkon Torp and the additional volunteers they have recruited have committed to helping young people reclaim their lives and get back on track.”

Griffith reports that most relief hearings conclude with the judge praising the CLiF client for turning his or her life around and becoming a success story. Ballou adds, “I believe in consequences, but I also believe in second chances. For the CLiF client, relief from registration means access to jobs and housing that before was unattainable. For the CLiF lawyer, realizing that you can make that much difference in someone’s life is deeply gratifying—the best ‘fee’ one can earn.”

The CLiF Project is actively seeking volunteer lawyers throughout the state to help. Those interested or wanting more information may contact Gwen Griffith at (503) 802-2102 or gwen.griffith@tonkon.com.