Stemming the Tide:
The Challenges of a Military and Veterans Lawyer
By Jesse Wm. Barton 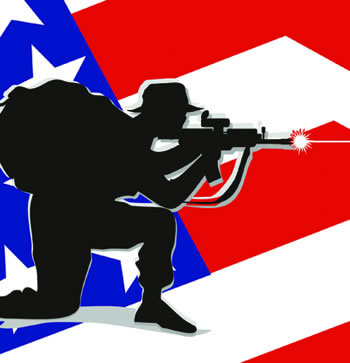 What many readers may not recall is that this was the second of a two-part series. Part 1 was Ms. Finnemore’s article “Firestorm on the Horizon: The Growing Problem of Post-Traumatic Stress Syndrome,” which the Bulletin ran in April 2010. That article contained a prediction that criminal justice professionals would “need to prepare for the coming tsunami of veterans who will need their help.”

Part 2, Basic Training, explained that “veterans made up nearly 20 percent of (Oregon’s) prison population in 2012, compared to about 10 percent (eight) years before.”1 This growth rate showed that the “coming tsunami” has arrived.

The “eight years before” that Ms. Finnemore referenced in Basic Training was in the early days of the nation’s now 12-year-old global war on terrorism. It was when Tennessee National Guardsman Spec. Thomas Wilson boldly asked a prior secretary of defense why American troops were so ill-equipped that they had to “dig through Iraqi landfills for pieces of scrap metal and compromised ballistic glass to up-armor their vehicles.” The secretary answered, “You go to war with the Army you have,” not the one you might want or wish to have at a later time.

This admission that the troops were ill equipped reflected the fact that when the prior administration took the nation into Operation Iraqi Freedom, it really had no idea what the nature of that war would be. For example, just a year before, the prior vice president insisted that the OIF would go smoothly, because Iraqis would greet American troops as “liberators.” Subsequently, the nation saw thousands of its troops — including 73 Oregonians — killed in action in Iraq. But the smooth-sailing viewpoint was so accepted in the prior administration that high-ranking officials’ contrary public statements were grounds for firing.2

Preparing for war isn’t only about preparing for battle. It’s also about preparing for the battle’s aftermath. The prior administration didn’t do that, either, when it failed to prepare the federal Department of Veterans Affairs for the coming onslaught of disability claims. This spawned the horrific claims backlog that burdens the DVA to this day.

From a defense attorney perspective, during those early days hardly anyone foresaw the coming tsunami of veterans who would be swept into the criminal justice system. By 2012, veterans were 18.9 percent (so “nearly 20 percent”) of the state’s prison population.3

This 89 percent increase in the veteran imprisonment rate from 2004 isn’t the only evidence that by 2012 the tsunami had arrived. For example:

Veterans were 8.4 percent of Oregon’s general population. Veterans’ 18.9 percent share of the state’s 2012 prison population means they were overrepresented in the ODOC by a factor of 125 percent.

Knowing about the accuracy and arrival of the predicted tsunami is one thing; doing something about it is another. Sadly, relatively recent cultural developments are an impediment to a solution.

Owing to such policies as the “backdoor draft” (i.e., “stop loss” and multiple deployments), “[t]he most significant development in the conduct of war in the twentieth century was the [near total] elimination of the American people from the conduct of the wars of the United States.”6 Military service now is consigned to the 1 percent of the nation who volunteer. The other 99 percent are free from any obligation of direct military service and also are free of even the most basic appreciation of the characteristics of military service.

But this “significant development” did not absolve the nation of its moral obligation — as Lincoln pledged in his second inaugural address — “to care for him who shall have borne the battle.” That moral obligation requires taking steps to repel the tsunami. Those steps are no secret. For example, the Oregon Criminal Defense Lawyers Association’s Library of Defense provides basic information about defense and mitigation strategies in veteran-defendant cases.

On the other hand, the first step in responsibly representing countless veteran defendants does not involve so-called “veteran courts” — at least not as they currently are structured. Those courts are based on an accountability model, which requires guilty pleas for admission. This means that veteran courts operate under a sort of presumption-of-guilt, which makes no sense for veterans with viable defenses (e.g., to the allegations’ mens rea and actus reus elements7).

For veterans with viable defenses, a more appropriate response would be diversion from prosecution. This is exactly what the 2010 Legislature intended by Senate Bill 999, which expanded district attorney diversion authority in veteran defendant cases.8 That bill enjoyed wide support, including from the Oregon Anti-Crime Alliance and the Oregon District Attorney’s Association. But because prosecutors are given full discretion on when the bill may be applied, and because most criminal defense attorneys aren’t familiar with SB 999,9 the bill hasn’t nearly achieved its legislative intent. Although no actual count has been taken, it appears that the total number of diverted cases could be counted on two hands (and maybe even just one).

For veterans with viable defenses, the proper approach requires culturally competent, multidisciplinary teams — i.e., professional teams that collectively possess “a thorough understanding of the pre-military, military, and post-military culture experiences and training,” and are capable of conducting “a psychological or neuropsychological evaluation of a vet in the legal system.”10 The need for cultural competence cannot be overstated. “The military [has] a unique culture and subcultures that are not only relevant but also necessary to understand and explain a veteran’s symptoms and behavior in the military and civilian world.”11

Not that securing the admission of such evidence necessarily is easy. Where 99 percent of society lacks any direct connection to military service, “expert witnesses in veteran criminal cases have often been challenged to explain the relevance of military culture, training and experience.”12 Indeed, as Brown, Stanulis et al. point out, the admission of such testimony can be “affected by lack of cultural competence by the most powerful force in the Court — the judge. For example, in one case the judge said [such expert] testimony would be irrelevant because he knew about war from watching movies.” Thus, “[i]t is imperative that the courts become educated to both the necessity and relevance of this type of multi-disciplinary approach.”

As complicated as that may sound, consider this:

The issue of culture and behavior is now taking on new meaning with the study of what has been termed epigenetics. Epigenetics is the study of gene expression and change in genetic activity as a function of cultural milieu. While many view genetics as destiny, new research has clearly demonstrated that cultural and environmental features can quickly and dramatically alter genetic activity.13

If scientifically sound, this epigenetic theory would fit squarely into the representation of veteran-defendants: As Brown, Stanulis et al. explain, “[T]he military culture may well result in not only behavioral changes, but also in genetic changes that require successful experiences in the return to civilian life in order to change genetic activity again back into a more ‘civilian friendly’ mode.”14

The fact that in the last decade the state’s criminal-justice system — as it is currently administered — integrated hundreds of veterans into its penal component shows that the “coming tsunami” has arrived. “[C]ommon gratitude bids” responsible professionals to “see what can be done for [these veterans’] redemption.”15 The only questions are the extent to which officials and practitioners within the criminal justice system will acknowledge the tsunami and will deploy the means to stem the tide.