Living the Dream:
Vanesa Pancic Meier, Yugoslav War Survivor, Has a Passion for Helping Others
By Melody Finnemore 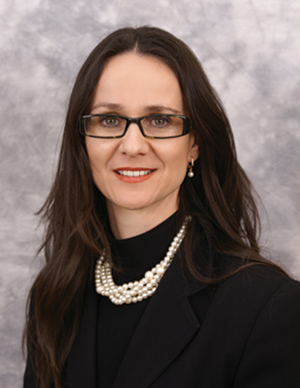 “I’m living the dream,” has become an almost rote and often less-than-enthusiastic response for many Americans when asked how they are doing. Overbooked schedules and seemingly endless responsibilities often add a smirk or an eye roll to the response.

When Vanesa Pancic Meier says it, however, she truly means it. In the nearly 20 years since she and her mother fled Croatia, Pancic Meier has earned a law degree and established her own thriving practice in Portland. She has married and started a family. And she began running marathons to stay in shape, never forgetting that her legs carried her to safety during a violent civil conflict that separated her family for years.

Pancic Meier was born in the former Yugoslavia in 1973, the daughter of a Serbian father and a Croatian mother. When civil war broke out in 1990, and the “ethnic cleansing” of Serbs began, her father vanished into thin air one night.

“My mother refused to divorce my father,” Pancic Meier says, noting that Pancic is the name of a Serbian tree. “My father had to leave overnight so he wouldn’t be executed, and we didn’t know where he was or how he was until 1993.”

They came to learn that he had taken shelter in Montenegro, and the family eventually reconnected through the Red Cross. While her older brother was protected because, as a merchant sailor, he wasn’t in Croatia most of the time, Pancic Meier and her mother were not safe.

“We really didn’t have a place to go, so when the war started we experienced the military coming into an apartment where we lived. They beat my mother in front of me,” she says, adding soldiers evicted the family at gunpoint.

“In the process of eviction and me running for my life, they killed someone else by mistake while they were shooting at me. The person killed had 20 bullets in his back. I’m not sure I would even still be alive if I hadn’t left when I did,” she says.

Pancic Meier had education on her side. She had earned her law degree at the University of Split in Croatia. In 1995, she received a full scholarship from the Open Society Institute to earn a master’s degree in comparative constitutional law at the Central European University in Budapest, Hungary.

“Part of the motivation for me was that I am a Type A personality, but it also was the only way to feed my family,” Pancic Meier says of her determination to further her legal education.

After her year in Hungary, Pancic Meier received another full scholarship from the Open Society Institute to study environmental law at the University of Utah. The blazing heat of Salt Lake City in August was just the first jolt of culture shock she experienced.

Upon her arrival, Pancic Meier was quickly enamored by vending machines that provided inexpensive tasty treats like ice cream anytime she wanted them. She also learned early on that when an American asks how you are, they don’t necessarily expect to hear a person’s life history in response.

While in law school, Pancic Meier did what she could to make ends meet, working as a telemarketer and a cook for the university, among other odd jobs. While environmental law wasn’t her favorite practice area, Pancic Meier says it was an invaluable learning experience.

Pancic Meier wanted to seek political asylum for her parents and, with no money for an attorney, she had little choice but to figure out the process for herself as her mother continued to endure harassment and abuse in Croatia. She eventually won her case and moved her parents to the U.S. in 1998.

Pancic Meier had moved to Oregon the previous year because of a family connection, and she supported her parents as they acclimated and established their lives here. She returned to the University of Utah to finish her law degree, graduating in 2000 and passing the Oregon bar exam in 2001.

She began working with an attorney who taught her the basics about immigration and bankruptcy law. In 2005, she was laid off and decided to open her own practice, serving Mexican, Russian and other minority populations — including Serbians and Croatians.

“Miraculously enough, we all get along here. We had to be removed from that crazy country to realize how insane it is to fight against each other,” Pancic Meier says.

“Many of her clients are minorities and many — mostly because of the language — don’t get the best legal representation,” he says. “I think the unique set of skills she has is not only her compassion and passion for helping other people, but also the language to be able to explain complex legal concepts.”

Along with running her own practice, Pancic Meier teaches legal courses at Pioneer Pacific College in Wilsonville and coordinates its paralegal and criminal justice programs. She is especially proud of helping to obtain the American Bar Association’s approval for its paralegal program. In addition, last summer she was appointed to be the Chapter 7 Panel Trustee, which she calls the crowning moment of her professional life to date.

Pancic Meier has an 11-year-old son named Nikola and a 10-year-old daughter named Emilia with her husband, Douglas Meier. She spends her free time learning foreign languages and is fluent in English, Russian and Spanish. She would like to learn Mandarin as well. Pancic Meier also enjoys running and has completed three marathons.

“Running saved me when I was living in Croatia, and I am very dedicated to staying fit in case I ever need to use my legs to save me,” she says.

Pancic Meier says her time in America has taught her that anything is possible. “People ask, ‘How are you?’ and I say, ‘I’m living the dream,’ and it’s true,” she says. “I came here with one suitcase and $20, and I was clueless. It wasn’t easy and it was a constant struggle, but this really is the country where — if you want to do something — you really can.”

ABOUT THE AUTHOR
Melody Finnemore, a Portland-area freelance writer, is a frequent contribution to the Bulletin.