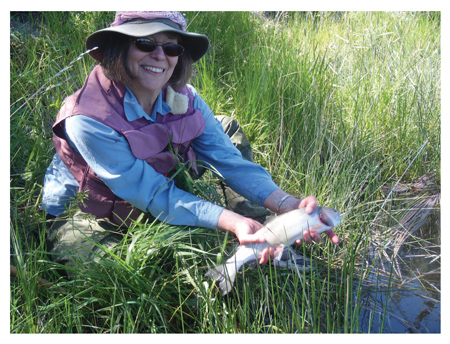 Maddy Sheehan never turns down an invitation to go fishing. While she has not yet fished every Oregon waterway, she has personally explored each of its major watersheds and is proud to have witnessed public awareness about watersheds and their ecosystems grow substantially over the years.

Sheehan’s publication of several editions of Fishing in Oregon, a guide to more than 1,300 sportfishing waters, and her role as of counsel for the Northwest Sportfishing Industry Association, combine her love of the outdoors with her passion for environmental advocacy. These interests took root when Sheehan was a young girl growing up in a small country town in northern Indiana on the shores of Lake Michigan.

“I would ride my bike to the Indiana Dunes before it was designated a national lakeshore, where at that time perch were disappearing from the ecosystem because of the despoilation of the Great Lakes,” she says. “I felt the absence of fish in the lake and knew there was something about fish and fishing that appealed to me even though I had no fishing experience. As a little girl, I submerged myself in the natural world whenever I could (from tramping through local creeks to playing house inside a lilac hedge to swimming for hours in the lake). Interestingly, long after I’d left Indiana for the Northwest, my four much-younger brothers and my nephews took up fishing with a passion, and my cousin became a fisheries biologist.”

Sheehan also was intrigued by writing and publishing, and in 1967 she earned her bachelor’s degree in English from Miami University in Oxford, Ohio. She then began her career at the McGraw Hill publishing company in New York, where she worked on educational audiovisual materials. Over the next several years, Sheehan’s work for companies that produced educational films often brought her to the West Coast, where she worked with art studios such as Hanna-Barbera Productions.

“When I left New York, I was headed for California because I thought that was where all the best West Coast publishing companies were. It was 1972 and I drove a VW bus with my two dogs, and I stopped to visit an aunt in Corvallis,” she says, noting she continued on to San Francisco, experienced its notorious traffic jams and immediately turned around and came back to Oregon.

Sheehan and her former husband settled in Portland and she worked briefly as an assistant for a promotion director at KOIN-TV before joining the Portland Art Museum’s Northwest Film Center. Sheehan, the center’soffice manager for nearly a decade and the publicist for its inaugural Portland International Film Festival, says she has fond memories of raising her daughters, April and Melissa, in the museum.

Still, she adds, she was increasingly drawn to the outdoors. Sheehan left the museum to launch Flying Pencil Publications, where she managed all aspects of the Scappoose-based company and published more than a dozen Northwest fishing guide books over 30 years. These include the award-winning Fishing in Oregon (Northwest Outdoor Writers Association’s “Excellence in Publication”), which evolved from the venerable Henning’s Guide. Sheehan purchased the rights to Henning’s Guide from Henning Helmstrom when he retired in 1984, and the following year it became The New Henning’s Guide to Fishing in Oregon. It then became Fishing in Oregon, and the 2013 release marked its 11th edition.

Sheehan says her work on the guides has introduced her to myriad aspects of Oregon’s natural beauty. “My travels on behalf of the book have made the entire state my home and all its fisheries my ‘home waters.’ I have great affection for Oregon,” she says.

Sheehan gained her fishing experience through a simple yet successful strategy: She asked experienced anglers to take her fishing and pass their knowledge on to her. Her first guide was a fly fisherman and Sheehan admits fly fishing for stream trout is her personal favorite fishing activity, though she says she has tremendous respect for those who use other fishing techniques successfully. Salmon and the fishery they support hold a special place in her heart.

While she has had many amazing experiences on Oregon’s waters, Sheehan regrets that she is not able to go ocean fishing because she gets seasick. And she is dismayed that former fishing favorites have been altered by wildfires and the introduction of non-native species. These include Davis Lake, which she visited frequently when her children were young but no longer fishes since it fell victim to both fire and the illegal introduction of largemouth bass. She still has plenty of favorites, though, including Central Oregon’s Fall and Deschutes rivers and the Hosmer Lake area.

Through her fishing and publishing, Sheehan in 1990 joined the board of the Northwest Sportfishing Industry Association. As the association worked to remove dams and became involved in other legal matters, Sheehan realized a law degree would help her be of greater service to the group. Determined to earn her law degree before she was 60, Sheehan attended her first class at the Lewis & Clark Law School at the age of 56.

While earning her degree, Sheehan was a law clerk for Scappoose attorney Patricia Gaw, and she provided low-income legal assistance as an intern for Lewis & Clark’s Legal Clinic. When she graduated in 2005, she became of counsel for the Northwest Sportfishing Industry Association. Since then Sheehan has worked on a variety of cases, ranging from efforts to protect Columbia River salmon and steelhead to, more recently, engaging in the debate about whether fish hatcheries are beneficial or not.

“I chose the sportfishing industry as a way to help Oregon and a way to maintain its wild beauty,” Sheehan says. “Often getting us in the courtroom door is what matters because it reminds the court that our fisheries also support small businesses that together make a substantial impact on Oregon’s economic equality of life.

“I have come to believe that the major villain in the depletion of our fisheries is the way the dams are run to benefit industrial-sized players. It’s not the hatchery programs or recreational fishing that are responsible for the depletion,” Sheehan adds. “The hatcheries help keep people interested in fishing, and once we’ve lost public interest in fishing it won’t be too long before commercial and industrial development destroys our wild rivers.”

A founding member and president of the Scappoose Bay Watershed Council, Sheehan has been involved in Gov. John Kitzhaber’s establishment of local councils to restore watersheds. She says she is gratified to see the statewide conversation evolve from what watersheds are to how to protect and restore them for the benefit of all.

Since earning her law degree, Sheehan also has worked as a fill-in attorney for Legal Aid Services of Oregon’s (LASO) St. Helens office, and in 2007 joined Columbia County Legal Aid’s board of directors with the goal of ensuring that legal aid thrives in Columbia County. She and her husband and fellow attorney, Michael Sheehan, are on a committee to revive Columbia County’s law library.

She and Michael are partners in Sheehan & Sheehan, where Maddy, in addition to environmental law, specializes in a general civil practice that includes wills, trusts, probate, guardianships, property disputes and contract drafting. Also an elder law practitioner, she was a student in Lewis & Clark Law School’s first elder law class, has been a member of the bar’s Elder Law Section since 2005 and served on the section’s executive committee.

“I decided that elder law was a good fit for me given my age, and my growing involvement in my mother’s life once she moved to Oregon and entered the final era of her life,” she says. “It’s very satisfying for me to help families understand the public benefit programs available for the elderly, navigate through the thicket of Medicaid rules and to provide guidance and a steady hand on the tiller as aging folks deal with family issues, from reworking their estate plans to reflect the reality of having disabled grandchildren, or spendthrift adult children — to helping adult children deal with the realities of providing care for their aging folks.”

Now a grandmother to three granddaughters, Sheehan says her practice and her pro bono work provide her with a way to make sure Oregon retains its abundant natural beauty for generations to come.

“It’s interesting to have become a lawyer later in life. I haven’t had to join a bigger firm in order to buy a house, raise my children and provide all of those expensive things you have to pay for earlier in life. So Mike and I have been able to devote a significant portion of our practice to pro bono work, taking on projects that really have meaning for us,” she says. “I feel like I’m doing good things for Oregon and I’ve been able to do good things for my community. I feel really good about how I’ve been able to use my law degree.”