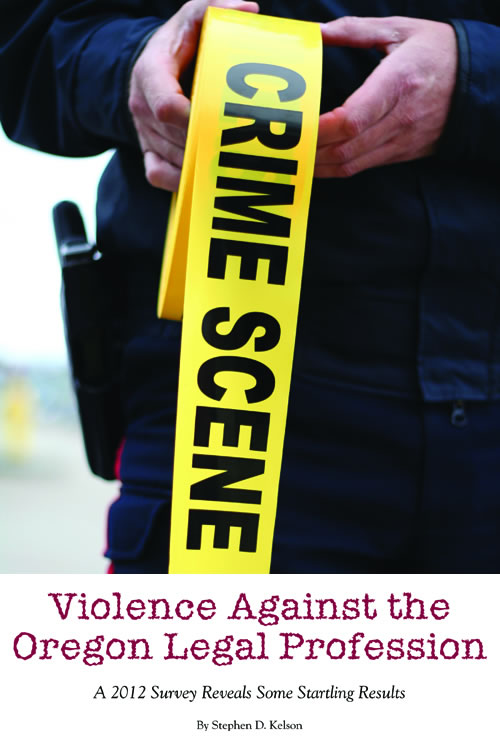 
On Jan. 30, 2013, Arizona attorney Mark P. Hummels and his client were shot during a mediation session by a pro se litigant in a contractual business dispute. Both died as a result of the shooting. On Jan. 31, 2013, a Texas assistant district attorney, Mark Hasse, was shot and killed as he walked from his car to the courthouse where he worked. Two months later, a Texas district attorney, Mike McLelland, and his wife were shot and killed in their home.

When such sensational acts of violence against the legal profession occur, they are generally considered extreme, uncommon incidents, and we assume that the odds of similar violence happening to us is simply too remote to consider. Contrary to public perception, however, the amount and level of violence against members of the Oregon legal profession is not as remote as you might believe.

From Oct. 15, 2012 through Nov. 16, 2012, all active, in-state members of the Oregon legal profession were surveyed regarding violence they have experienced in the practice of law. What follows is an examination of responses to the 2012 survey, which show that members of Oregon legal profession regularly experience threats and violence from opposing parties, interested parties, their own clients and even opposing counsel, at any place and at any time.

Studies of Violence Against the Legal Profession

Limited research exists on the subject of violence against the legal profession. However, studies do show that a substantial amount of violence is regularly directed at the legal profession, and it appears to be increasing. Statistics gathered by the U.S. Marshals Service, regarding violence against federal judicial officials in the United States, shows that between 2002 and 2012, the number of inappropriate communications and threats involving federal judges and personnel have more than doubled from 565 to 1,370 per year.

While there is no national method for reporting attacks against the legal profession, analysis has revealed that threats against the legal profession at the state and local court levels are far more serious and occur more frequently than those at the federal level. A study by the Center for Judicial and Executive Security shows that the number of documented shootings, bombings and arson attacks at state courthouses has increased every decade since the 1970s, from 29 incidents in the 1970s to 78 incidents between 2000 and 2009.

To date, nine statewide surveys have been conducted regarding violence against the legal profession and the results present surprising details of violence experienced by attorneys. (See Chart 1 on page 24)

Many of these threats included written letters, e-mails, text and websites, verbal threats of physical violence and death threats. Violence included assaults, batteries and vandalism to the attorneys property. The results of these surveys show that violence against the legal profession is far more prevalent than reported by the media or commonly believed.

The Survey of Violence Against the Oregon Legal Profession

The survey was conducted online through SurveyMonkey.com. All active, in-state members of the Oregon legal profession with available email addresses were requested to respond. The questions sought responses regarding:

Threats and Acts of Physical Violence

The surveys primary question asked attorneys if, whether while serving as a member of the legal profession, they had ever been the recipient of a threat or had been the victim of a violent act. Of the 1,862 responses to this question, 684 (36.7 percent) of the respondents reported that they had been threatened or physically assaulted at least once. This percentage is in the lower range of those reported by respondents in similar state bar surveys examining violence against the legal profession. (See Chart 1.)

Respondents to the survey provided descriptions of more than 505 examples of threats or acts of violence that had been perpetrated against them. The following responses are provided as examples of the kinds of violence reported by members of the Oregon legal profession:

The survey asked respondents to identify the types of threats or acts of violence received relating specifically to the recipients responsibilities as a legal practitioner. There were 676 respondents who reported their responses set forth below. Inappropriate and threatening communications were those communicated by letter, phone, fax or verbal interaction. Inappropriate approaches included being followed, face-to-face confrontations or attempts at violence. A total of 43 respondents (6.4 percent) who identified themselves as recipients of threats and violence reported physically being assaulted.

The vast majority of respondents (531, or 78 percent) identified inappropriate and threatening communications. These communications were made primarily in person or by phone, and often included direct and veiled threats. For example, individuals made threats of: You better watch out; You might get stabbed; Ill get you; Ill track you down and shoot you like a dog; You better make your peace with God; Were going to get you; Im coming for you one day; and Ill come back and kill you. The vast majority of these reported threats were made directly against attorneys, but in some circumstances, were directed against the attorneys family and children. One attorney reported a drive-by shooting at his office, followed by an answering machine message threatening to kill his daughter if he didnt get out of town.

Respondents who experienced other forms of threats and inappropriate communications were asked to identify how they occurred. Attorneys reported 259 (38 percent) incidents of inappropriate approaches, 176 (26 percent) reported a combination of responses, and another 60 (nearly 9 percent) classified their responses as other. Attorneys reported learning about threats and violence against them through other disturbing means, including threats made to their clients, opposing counsel, medical professionals, calls from authorities regarding attempts to hire hit men, bombs at their residences, packages and through written correspondence. One attorney reported learning that someone had hired a personal investigator to ascertain where their children went to school, names, ages, photos, how they went to school, when they were home alone, the layout of their home and the location of the childrens bedrooms.

Threats or Violence as a Public or Private Attorney

The survey asked members of the Oregon legal profession to identify where they had experienced threats. Similar to the survey regarding violence against the legal profession in other states, responses indicated that the most prominent locations of threats and violence have been the business office (439, or 66 percent) and the courthouse 286, or 43 percent). However, more than 185 respondents (28 percent) reported that they experienced threats and violence beyond the office and courthouse, including on the courthouse steps, at public meetings, in parking garages, on public streets and elsewhere. For example, multiple attorneys reported assaults and batteries while at bars. Multiple attorneys (60, or 9 percent) reported property damages and gunshots fired at their homes. Several attorney reported direct threats made against their family members. One attorney reported that an opposing party [c]alled my home, spoke to one of my children, then called me, told me where my children went to school/what my child said on the phone and threatened to harm my children.

Attorneys that responded to receiving threats were asked to identify if the individual who made the threat was the same person or connected to the person who subsequently assaulted them. Of 668 responses, a total of 31 incidents of subsequent physical assaults were reported. An additional seven could not identify whether the assault was related to the threat.

Relationship with the Perpetrator of Threats/Assaults

Attorneys who reported being the victim of threats or violence were asked if it was reported to police. Of 661 respondents, 249 (37.7 percent) indicated yes, while 412 (62.3 percent) said no.

When Threats or Violence Last Occurred

The survey also asked respondents that had received threats or had been the victim of physical assault, if such threats or violence had altered the way they conducted their legal business. Of 645 respondents to this question, only 36 (5.6 percent) reported that such incidents had affected their conduct a great deal, 222 (34.4 percent) indicated that their conduct had been somewhat affected, and 387 (60 percent) identified that it did not alter the way they conducted business at all. These percentages may be associated, in part, to the perception reported by one attorney that [t]hreats of violence are not a big deal and any adult should be able to handle them well.

On the other hand, a substantial number of attorney reported taking protective measures, including purchasing and keeping weapons and guns within reach, taking training in martial arts, installing entry barriers in the office and establishing security measures in the event of an office emergency.

The purpose in examining violence against the Oregon legal profession is not to instill fear in lawyers or in any way to discourage the practice of law. Instead, it is to dispel the assumption that threats and violent acts against members of the legal profession are extremely rare incidents or do not occur because they are not being reported in the media. Threats and violence often occur without warning from any side of the case and can reach into every aspect of an attorneys life. It should not be assumed that it can only happen to someone else.

ABOUT THE AUTHOR
Stephen Kelson is a litigation attorney and mediator at the law firm of Christensen & Jensen in Salt Lake City, where his practice focuses on commercial litigation and mediation. Kelson has published numerous articles on topics related to legal professionalism and professional liability issues, and is a frequent presenter on professional legal topics. For more than a decade, he has studied, documented and conducted numerous statewide surveys regarding violence against the legal profession.