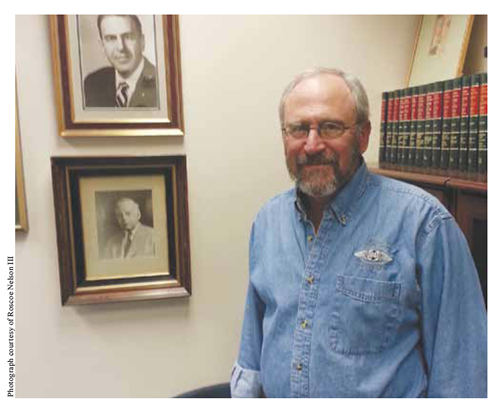 A tour of Nelson & Nelson’s Portland office reflects legal history that began in the early 1900s in Richmond, Va., spans three generations and, at its heart, illustrates a son’s everlasting love and admiration for his father.

The practice run by Roscoe Nelson III features the original letterhead from the Richmond firm his grandfather founded, scores of corporate seals the elder Nelson obtained for his clients, and a triptych depicting his arrival in Oregon just after the turn of the century, among other memorabilia. A well-known trial attorney in Richmond, Nelson practiced with his brother at the original Nelson & Nelson.

When he moved to Portland, Nelson established Day, Hampson & Nelson, which eventually became Lane Powell. His brother was a rabbi, and Nelson played a key role in attracting other rabbis who were leaders in the Reform Judaism movement to Portland. When they and other Jews were excluded from joining Portland’s only country club, they banded together to purchase land and build the Tualatin County Club. For many years, the Nelson family has invited the Oregon State Bar to host an annual luncheon there, celebrating members who have been with the bar for 50 years or more.

“I never knew my grandfather, but I certainly knew my dad,” Roscoe Nelson III says. “I used to love going to court with him, and he would appear in both trial and appellate court. He would even sometimes take me out of school to go with him.

“Watching him in action was pretty exciting to me, and he always made a special effort to explain to me what kind of a trial it was, what kind of an appeal it was and what kinds of issues we were going to explore. He would always break it down so I could understand,” he adds.

Roscoe Nelson Jr. made his mark on the community personally and professionally as well. He was a board member and leader of several secular and religious community organizations, and a dedicated advocate of protecting the rights of Japanese-Americans during and beyond World War II. He set legal precedents that included laws related to false imprisonment after defending a woman wrongly arrested for shoplifting at a J.C. Penney while shopping with her granddaughter. Roscoe Nelson Jr. was a longtime solo practitioner until he and his son founded the Rose City incarnation of Nelson & Nelson in 1975.

A World Full of Music and Art

Despite growing up in a family of attorneys and spending a lot of his youth helping out around his father’s law office, Roscoe Nelson III recalls his parents encouraging him to pursue whatever career he desired, so long as it fulfilled him. He had been drawn to art and music from a young age, interests fostered by an artistic mother and a father who supported the symphony and the opera financially and by volunteering his time to write program notes.

“When I was growing up, great opera stars would come to town and be at our house for dinner,” he says.

Roscoe Nelson III began playing music when he was 5, studying the accordion with Luigi Rangan and teaching himself to play the guitar. As a college student at Whitman College in Walla Walla, Wash., he played in a jug band called Angus and the Solar Bovines.

He also earned a bachelor’s degree in economics and a minor in art, and decided he did indeed want to go to law school. Roscoe Nelson III set his sights on the University of Virginia, where his father and grandfather had earned their law degrees. His father advised him to consider Willamette University instead.

“The University of Virginia said they taught national law, but my dad told me to go to Willamette if I wanted to practice in Oregon,” he says. “What was in my heart was to practice with my father eventually, so I listened to him and went to Willamette, and I’ve never looked back.”

In 1971, Nelson’s first year of law school, the Oregon Supreme Court initiated a student appearance rule that allowed law students to handle cases for district attorneys, public defenders and legal aid offices. Nelson joined the Multnomah County D.A.’s office and soon was trying back-to-back cases. In addition to the invaluable trial experience he gained, he learned from a senior deputy the value of speaking to jurors and other court participants in a way that humanized the process and that they could relate to.

“That’s how I try cases to this day. It was a real important lesson to me and it was a well-taken comment,” he says.

When Nelson and his father began practicing together, he transitioned from criminal law to estate planning, trusts, tort claims and business litigation, which complemented his father’s nationally recognized expertise in estate and trust planning. Nelson says the most rewarding part of his practice stems from working with burgeoning companies.

A Mentor and a Friend

Roscoe Nelson III credits his father with teaching him skills and habits that he continues to use today. He would dictate wills and other documents, and his dad would mark them with suggested edits and comments. Even today, Roscoe Nelson III dictates the information and reviews a hard copy before his legal assistant finalizes it electronically.

“I know lawyers who have kids and the likelihood of them being able to practice law together is about zero. I can’t think of one instance where my father pulled rank on me and said, ‘Well, I’m your father and you’re going to do what I say.’ He would always help me in any way he could,” Nelson says.

September marked the 28th anniversary of Roscoe Nelson Jr.’s death from pancreatic cancer that had been diagnosed on Father’s Day of that year. To say that Roscoe Nelson III, himself the father of two adult children, misses his father’s friendship, love and support is more than an understatement.

“I will say that I would willingly give up the rest of my life even if I could get him back for just a few hours,” he says.

It helps to remember the good times they shared. The family loved to travel, so to celebrate his father’s 50th year as an attorney Nelson arranged a trip to Switzerland for his parents — no easy feat given that his father had a pacemaker that prevented him from venturing above 5,000 feet in altitude. That year also happened to be their firm’s 10th anniversary, adding to the celebration. Nelson and his father frequently played golf together. And, Nelson says, it’s gratifying to reflect on his father’s contributions to the legal community during his 52 years of practice, which included countless hours of pro bono service for people who otherwise couldn’t afford an attorney.

Recently, the Portland office of Legal Aid Services of Oregon received a $33,200 grant from the Roscoe C. Nelson Jr. Fund for Pro Bono Law Services to the Poor, which is administered by the Oregon Community Foundation. Nelson’s family established the fund to honor his volunteerism, and the endowment is intended to connect volunteer lawyers with low-income people in need of legal services in Multnomah County. The grant will help fund the office’s Volunteer Lawyers Project.