Why Youll Never Be a Good Writer:
And Why You Should Still Keep Trying
By Megan McAlpin 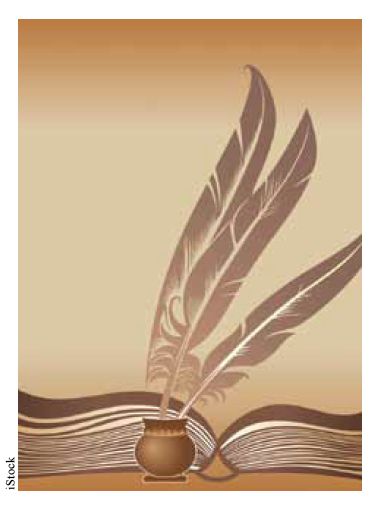 Every August, I meet a new group of first-year law students. And every year, when I meet this new group of law students, we have the very same conversation about writing. Some of them tell me that they came to law school as very good writers. And some of them say that they are dreading only one class — Legal Research and Writing — because they are terrible writers.

I don’t believe the good writer and terrible writer labels because writers can always be better. If, as writers, we give up on the idea that we are already cast in stone as good writers or terrible writers, then we can focus instead on continuously becoming better writers. Read on for how giving up on being a good writer (and then putting in some effort, seeking out feedback and adjusting your attitude) can actually make you a better writer.

When a student — or a lawyer — labels herself as a good writer or a bad writer, she seems to ignore all potential and possibility for growth. Writers (and that’s all of us; we’re all writers) who label themselves as good writers (or great writers!) seem to be saying that they are finished. They are saying that they have learned to write and that they do it well and that they are done learning now, thank you very much. But writers can’t really arrive at good writing. It’s not a destination where you can finally relax and put your feet up. It’s a process. You can always be better. There’s always somewhere else to go.

Writers who label themselves as bad writers also seem to be saying that they are finished. They tried, they failed and there’s just no use. They are terrible writers. Maybe they’ve tried in the past, but they never arrived at this place called Good Writer and now they refuse to continue the journey. These writers tend to think that a good writer is something that you either are or are not. And if you’re not, well, you just need to accept that. There’s nowhere else to go.

Giving Up on Being a Good Writer

One of the most wonderful and most frustrating things about writing is that you can always be better. And we should all be working at being better. (See “Mentoring Legal Writers: Overcoming ‘Illusory Superiority’ ” by Elizabeth Ruiz Frost in the July 2013 column of The Legal Writer.) But in order to be better, you have to let go of the idea that you are a good writer or a terrible writer or even a mediocre writer. And then you have to embrace the idea that every single time you write, you have an opportunity to learn something, to grow and to become a better writer.

Giving up on being a good writer and deciding on a regular basis to become a better writer takes effort and patience; becoming a better writer requires you to write. A lot. You have to draft and re-draft and edit and revise. You have to very consciously take what you thought was a pretty decent letter or brief and make it better.

Putting in the Effort

So the first step in becoming a better writer is, quite simply, to make the effort to think about your writing. Unfortunately, no one is going to pay you to think about writing. While clients expect your writing to be good, my guess is that they would balk if you billed for the time to take that CLE on writing or to read a book or a blog or an article on writing. If you’re gong to become a better writer, it’s going to be on your own time. And it’s going to take effort.

There’s only so far you can go by thinking about writing on your own. To really improve as a writer, you need other people to look at your work. And you need them to be completely, sometimes brutally honest about it. Finding someone to take the time to read your writing and give you honest feedback can be hard. Ask a trusted colleague in your organization if she can occasionally look at something you’ve written. Or, if you’re working with someone who is a strong writer, ask him if he’s willing to talk to you about what changes he made to your writing and why he made those changes.

And then — and this is the hard part — you need to accept the criticism with such grace and gratitude that your critic1 is willing to be completely, brutally honest with you the next time you ask for feedback. Doing this can be almost as hard as finding someone to give you feedback. Your first instinct, of course, might be to decide that you will never ask someone to give you feedback again. Resist that instinct. (For more on how painful feedback can be, see Suzanne Rowe’s article “Painful Prose: The Difficulty of Writing” in the January 2011 column of The Legal Writer.)

Instead, invite the criticism. Ask for more detail. And then, give some feedback on the feedback. Tell your critic: “It was really helpful to me when you pointed out the general mistake that I was making but then also pointed out two or three instances of the mistake. I also really appreciated that you showed me two or three ways of fixing it. I really appreciate the time that you spent.”

Be grateful for the feedback. Then remember that one of the best ways to repay your critic is by mentoring someone else. When someone asks you for feedback, take the time to give it.

A Different Way of Thinking

Now, actually feeling grateful that someone told you that your writing needs work isn’t easy. It feels a little like being thankful for a punch in the face and then asking for another punch in the face. But with a little shift in your thinking, constructive criticism actually isn’t quite as hard to take.

If you think that you’re a good writer, then you might interpret a critique to mean that you aren’t actually a good writer. (And for those of us who tend toward hyperbole, we might hear that not only are we not a good writer but we are actually a bad lawyer and a bad person, too.) Criticism can be just as devastating if you think that you’re a terrible writer. Someone else reads your writing and agrees. You really are a terrible writer.

When I begin this conversation about writing with my students, I try to be really gentle. I remember going to law school and thinking I was a good writer. But I also know that the best thing that ever happened to me was learning that I could be a better writer. Now if you’ll excuse me, I need to send this article to two trusted colleagues who I know will give me some very honest feedback.

Anne Lamott, Bird by Bird: Some Instructions on Writing and Life (1994).

1. The word critic isn’t quite the right word here. It has such a negative connotation. But it’s shorter than “giver of constructive criticism who intends with the best intentions to improve your writing.” So I’m going to stick with it.

ABOUT THE AUTHOR
Megan McAlpin teaches Legal Research and Writing at the University of Oregon School of Law. She is, as always, grateful to her colleagues Liz Frost and Suzanne Rowe for the time they take to give her feedback. Contact her at mmcalpin@uoregon.edu to share your thoughts on whether there is such a thing as a good writer.