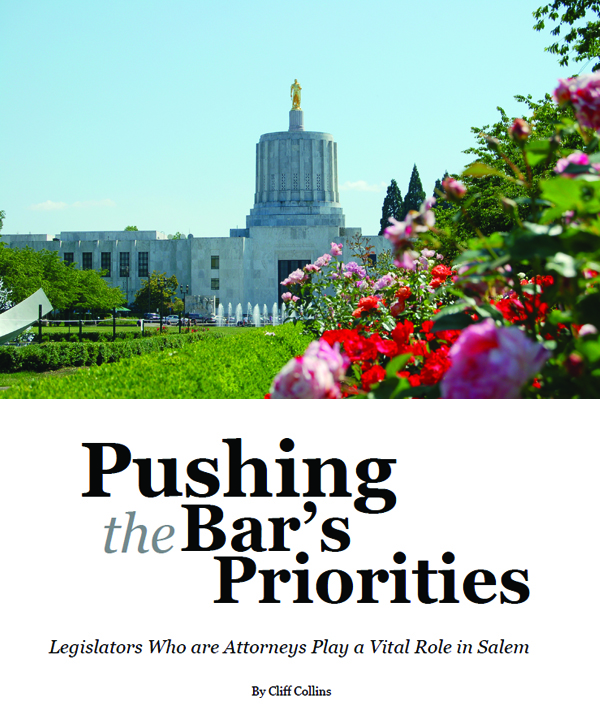 OSB Members in the Legislature


Lawyer-legislators in leadership positions this session express hope that lawmakers will find a way to enhance funding for the court system. They also acknowledge that this will be challenging.

“I think we can afford what we deem important,” says Rep. Jennifer Williamson, D-Portland. “We have as a legislative body not done what is needed for the court system.”

Adequately funding the Oregon Judicial Department is one of the Oregon State Bar’s top legislative priorities. Funding decisions made in recent years have resulted in both staff cutbacks and furlough days at courthouses. Gov. John Kitzhaber’s recommended budget calls for a $22 million reduction from current service levels in the Judicial Department’s budget.

Williamson is one of 13 lawyer-legislators serving in the Capitol. (See sidebar on this page.) Attorneys in the Legislature play an important role in bringing a lawyer’s perspective to potential legislation and in advocating for policies important to the Oregon State Bar.

Chief Justice Thomas Balmer, who has made increased money for the Oregon Judicial Department a top priority, says the state courts would need about $410 million in the 2013-15 biennium to restore full service and reopen courts five days a week. The courts have lost about 15 percent of their permanent staff in recent years, or about 200 full-time-equivalent employees, The Oregonian reports. Balmer wants to restore close to one-third of those positions.

The Joint Committee on Ways and Means co-chairs’ budget for the judicial branch, developed by Sen. Richard Devlin, D-Tualatin, and Rep. Peter Buckley, R-Ashland, includes funding for three additional Oregon Court of Appeals judge positions approved by the Legislature in 2012, as well as an additional $13 million above the governor’s budget. The co-chairs said it aims toward the priority needs listed by Balmer, including funding for drug courts and other vital programs.

“This funding level remains problematic for the courts, however, and will require further consideration pending the results of the proposals brought forth by the Joint Committee on Public Safety,” they wrote in releasing their budget March 4.

Williamson, who co-chairs the Joint Ways and Means Subcommittee on Public Safety, believes most Oregonians don’t realize how the court system “really impacts all parts of our society,” she says. “I don’t want to make any cuts in the judicial branch budget, and I hope to put a little more money into the court budget.”

Last year, the Legislature stipulated that three new judges be brought onto the Court of Appeals, so “this time around, we have to fund it,” she says. She points out that the Oregon Court of Appeals is the nation’s busiest, based on the number of cases it handles annually, adding that the state ranks 45th in the nation in terms of how much it pays circuit court judges. “We want a quality, diverse bench. When we keep the pay not competitive, it makes it difficult for people to become judges.”

Lawyer-legislators from both parties say they hope to improve funding beyond the governor’s budget.

“I appreciate the work of the judges and their staffs to keep the courts open during these challenging times,” he says. “I would like to see the 2013-15 Judicial Department budget improve from the governor’s recommended budget. I support the co-chairs’ proposed increase in funding over the governor’s budget and would like to see the new panel of the Court of Appeals funded.”

House Minority Leader Mike McLane, R-Powell Butte, says he doesn’t think the governor’s recommended reductions in the Judicial Department’s budget are necessary. “Oregon has $1.7 billion in additional revenue, as well as the choice to reform the Public Employees Retirement System. We can fully fund the judicial branch of our government if we have the political will.”

Sen. Floyd Prozanski, D-south Lane and north Douglas counties, who chairs the Senate Judiciary Committee and co-chairs the Joint Committee on Public Safety, echoes the sentiment: “I personally hope we in the Legislature can provide more additional funding, at least to fund the status quo.”

Another concurring voice is Rep. Chris Garrett, D-Lake Oswego, who says, “I do believe we can improve on the governor’s numbers.” Garrett, who is speaker pro tem of the House and is working on a corrections reform package, adds, “There’s a great coalition of legislators working toward adequate court funding” with legislators and business leaders. He says the Judicial Department “doesn’t have a high profile,” and Oregon lawyers need to contact their representatives to impress upon them the importance of adequate funding.

Garrett was one of the first legislators to join in the effort to create a “Court Caucus” to help discuss strategies for making sure that the health of Oregon’s court system is taken seriously in Salem. The caucus is a group of legislators working to make other members more aware of the need to fund court facilities, raise judicial salaries and work toward the best budget possible, he says.

Another very important priority for the OSB is to ensure adequate funding for legal services for low-income Oregonians. Over the last five years, there has been an increasing number of people seeking assistance from legal aid offices around the state. At the same time, federal funding for legal aid has been at best flat, and IOLTA — Interest on Lawyer Trust Accounts — funding has diminished with declining interest rates. As a result, legal aid programs in Oregon can meet only a fraction of the need.

“It will be difficult for the Legislature to address the funding problem of the legal aid system,” says McLane. “I certainly understand the need for legal aid but am doubtful that the make-up of the current Legislature can come to an agreement for funding legal aid, given all the other demands on the general fund.”

Garrett, too, has his doubts. “We need to increase our commitment,” he says, pointing out that two related bills have been introduced in the House. Passage would be tough for both, he admits. In regard to legal aid funding in general, “I think we do a lot better than other states, but we don’t do enough.”

Courtney, who began his legal career as a legal aid attorney, says our legal aid system is integral to answering the need for legal services, which has grown during the economic decline. “The state budget is unable to meet the needs of legal aid,” he says. “I am open to proposals, such as the tax credit, that help leverage the private donations of attorneys and others who support legal aid and its critical mission.”

“Access to the court system is something we have to fund, and the need is growing every year,” says Williamson. “And we don’t do a good job of making sure there is access to court. It’s heartbreaking. We have not funded legal aid at a level that would meet that need in our communities.”

If Oregon can encourage economic growth and promote more family-wage jobs, those steps would help alleviate the problem so that more Oregonians can afford to hire legal representation, says Prozanski. He says the state is in an “extra-tight budget cycle. A lot of one-time use money has been used.” Legal aid funding “may not receive the same priority” as funding the judicial department, he predicts.

Indigent defense must be funded in order to allow criminal matters to go forward, Williamson emphasizes.

But in many parts of the state, public defenders are paid substantially less than district attorneys. This discrepancy has caused some lawyers to worry that indigent defendants may not always get adequate representation. The Office of Public Defense Services repeatedly has suggested that the Legislature take steps to bring public defenders’ salaries closer to the level of their colleagues in district attorney offices.

“This is an issue I’ve been working on for several years,” says Williamson, who practices at the Ruby Firm and has volunteered as a public defender. “I got to see firsthand that it’s incredibly hard work for very little pay.” She believes that a lot of people “assume both sides receive the same amount” of compensation. Instead, “our public defenders are taking quite the financial hit” to provide those services, she says.

In some states, both public defenders and prosecutors are state employees, she explains. But in Oregon, indigent defense is provided by nonprofit agencies and private lawyers in the community.

“I’m hoping we can invest in that budget this cycle,” Williamson says.

McLane concurs. “In my view, Oregon should fund indigent defense at a higher rate,” he says. “The Legislature has a constitutional duty in this regard, and I don’t believe there is enough emphasis on it.”

Prozanski says that if we don’t have adequate defense available, “you’re setting up the court for additional burdens, clogging the courts with a backload of cases.”

“The best thing we could do for indigent defense in Oregon is to diminish the need for their services,” adds Courtney. The Legislature is considering reforms that would help drive down the recidivism rates in the state.

“Oregon does an adequate job of funding indigent services, but like all budgets, we could do more to provide the attorneys who serve this important role in the legal system with lower caseloads.”

The Oregon eCourt program, an effort to convert to an electronic system from a paper-based one, now is being implemented in several counties, with more coming online during 2013.

“I am impressed with eCourt and believe the system will serve Oregon well,” says McLane. “I will continue to advocate for its funding.”

“My understanding is that the Judicial Department has made significant improvements in the implementation of eCourt over the past few years,” says Courtney. “This is encouraging, as eCourt is an important step in modernizing our court system. I anticipate the Legislature will continue its commitment to implementing eCourt, provided it stays on track.”

Prozanski says eCourt will save money in the long run and will be much more efficient and reduce staffing needs. But funding it for the projected full implementation date of 2015 may not prove to be feasible, given competing needs for money. “I would say we may have to slow down its implementation,” he contends. “I hope we can meet that goal. It definitely will make the system more fluid.”