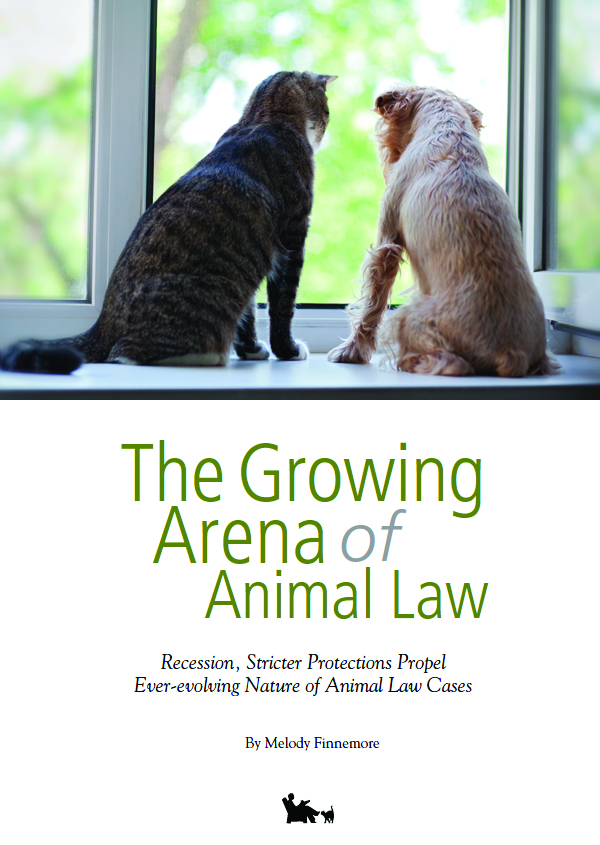 
It seems that hardly a week goes by without news of another case of animal neglect or cruelty. From starving horses whose owners could no longer afford to feed them to hoarders who take in more cats than they can manage to animals that are tortured, the stories are prolific. These stories, while heartbreaking, are from a legal standpoint often multifaceted and complicated.

That dynamic is just one of many reasons attorneys who specialize in animal law chose the practice area. The recession has certainly caused an increase in the number of cases related to neglect, as people struggle to feed themselves and their families and often aren’t able to care for their animals. At the same time, a growing movement behind animal rights has led to more numerous and more stringent laws protecting animals and prosecuting those accused of hurting them.

Several Oregon attorneys who either specialize in animal law or defend the humans charged with crimes against animals say the field continues to evolve rapidly after gaining greater awareness and recognition during the early 2000s. Horses increasingly have been at the center of animal law cases, ranging from starvation and neglect to the debate about whether horses should be slaughtered for meat.

Hillsboro attorney Kathy Hall specializes in equine issues and is a longtime rider and breeder. She also chairs the Oregon State Bar’s Animal Law Section and says the section’s efforts to pass legislation offering greater protection to horses was a hard-fought battle this year.

Draft legislation that would have extended protections beyond household pets to include livestock met stiff opposition from the Oregon Criminal Defense Lawyers Association, the ranching and agriculture community, and groups representing wildlife interests. The section ultimately decided to withdraw the legislation.

“There has been an abundance of neglected horses throughout the state, so I wasn’t comfortable with leaving livestock out of the definition,” Hall says. “We as a section decided we weren’t comfortable restricting that definition to basically domestic household pets because it would leave out many animals that we feel are worthy of protection. Horses are such caring and peaceful animals and they deserve much better than that.”

Hall says that not only should horses be protected from neglect, they also should be prevented from going to slaughter — in large part to protect humans. While horsemeat is commonly fed to zoo animals and is used for bear traps, recent efforts to legalize horse slaughter in the U.S. could have a negative ripple effect. Horses that were used for racing and other sports often were given medications or other drugs that have no place in the human food chain, she points out. Already, U.S. horses are shipped to Mexico and Canada, where slaughter is legal and the end product can be imported back into America.

Oregon’s wild horses also have been at the forefront of recent animal law issues. Hall and Tigard animal law attorney Geordie Duckler have been active in the effort to preserve the state’s wild horse population, which federal agencies have considered reducing through sterilization of mares, roundups and relocation. Duckler, who has helped defend federal agencies against lawsuits involving wild horses as well, says the issues easily become convoluted. For example, the wild horse management is intended to address complaints by ranchers who say the horses drink the water and graze the lands they own and provide for their livestock.

“There really aren’t good guys and bad guys in these types of fights. Sometimes, like with federal agencies tasked with protecting wild animals, they do one thing and they are applauded and the next day they are criticized,” he says.

Along with his participation in the wild horse issue, Duckler is known for several high-profile animal law cases that most recently include a dog custody case involving a husky mix, a Portland man and a woman attending Oregon State University. After several months of legal wrangling over who rightfully owned the dog, the OSU student who found the dog as a stray the year before and named it Bear returned it to its original owner, who had named it Chase.

Duckler says his work increasingly includes relocation research. When people are interested in moving to Oregon or other parts of the region, they contact Duckler to learn about what kinds of exotic animals are allowed here, how many animals they can keep if they want to operate a shelter or rescue operation, what kinds of breeds are allowed, and what permits and licenses are required.

“People could do the research themselves, but they find that when they get on the Internet it becomes kind of this confusing mess. They don’t want to spend all this money on their new house and then find out they can’t have certain animals or a certain number of animals,” he says, adding that nearly every time his phone rings, it presents a new and intriguing issue related to the practice area.

“On a daily basis, someone has something that you didn’t expect and that you somehow have to figure out. It’s not just intuitive and it always involves some interesting thing about an animal,” Duckler says. “I certainly have many more cases to choose from than I’ve ever had before. And, until these people call with a particular request or problem, it’s not something that I had thought about before.”

An emerging area that Hall has encountered is representing dog breeders who are exploring advances in reproduction and artificial insemination, along with veterinary advances in general.

“There are advances in human reproduction and medicine that apply to animals as well,” she notes.

Holly Anne Gibbons, a Waldport attorney who handles pet trusts, has seen her share of cases that weren’t covered in law school. Among them, how to determine perpetuity issues for koi living in a client’s pond. The fish can’t be spayed or neutered and therefore, life and death becomes a very gray area. Long-living pets such as parrots and tortoises present other interesting conundrums for owners who want to provide for them after death, Gibbons says.

“The psychology of it is really interesting. Most of my clients are right here on the coast, but for pet trusts people will travel very far to come and see me,” she says. “I believe it’s because I do highly customized planning. It feels really good to help people have that peace of mind around planning for their pets.”

Scott Beckstead, a former Waldport attorney, began practicing animal law nearly 20 years ago and co-authored the state’s first casebook on the topic. He serves on the advisory board for the OSB Animal Law Section, and is the Humane Society of the United States’ senior state director for Oregon.

During his tenure with the HSUS, Beckstead has developed a diverse, statewide coalition to help financially struggling horse owners and identified placement options for horses in need of new homes. During the past two legislative sessions, he worked to successfully pass the nation’s toughest puppy mill law, a ban on the ownership of exotic pets and a ban on the sale and possession of shark fins.

During this current session, Beckstead is crafting legislation that includes a bill restricting the chaining and tethering of dogs. Another bill he supports would provide reasonable restrictions on wildlife traps to protect family pets and wildlife.

“The battle to improve state laws is never-ending. In Oregon we have some very strong laws on the books, but we’re constantly working to improve them,” he says.

One such victory occurred last fall, when the Oregon Court of Appeals ruled in State v. Nix that animals can be considered crime victims if they are abused or neglected.

“That was revolutionary in the eyes of a lot of legal scholars and animal welfare advocates because it elevates the legal standing of animals in legal proceedings,” Beckstead says. “Crime victims in Oregon are entitled to certain rights, so that means that animals might be able to establish some legal standing in court. We expect to see that used in other states as well because of its precedent-setting nature.”

Along with his work for the HSUS, Beckstead is an adjunct professor who teaches animal law at Willamette University College of Law. He began teaching the course four years ago and strives to provide lessons that are not only practical, but emotionally and strategically balanced as well.

“I take a very practical, street-level approach to teaching animal law. I want to give students a real-life understanding of animal law cases and the issues they will encounter in such cases. And I encourage students to think like lawyers and learn how to represent both sides,” he says.

Among the activities students do in class, they write an animal adoption agreement between a private party and a humane society, they construct pleadings used in civil litigation, and they compose and deliver a closing argument based on a trial record provided by Beckstead.

“My goal is to not just have them think like animal advocates but good lawyers, and good lawyers need to be able to aggressively defend both sides. I think that’s probably the most valuable skill a lawyer can have,” he says. “I really challenge them by asking them to defend someone who has been charged with a horrible act of cruelty.”

As Duckler has noted repeatedly over the last few years, criminal defense attorneys who specialize in animal law are a rare breed indeed. And, given the rise in cases related to animal law and the challenging job market law school grads have faced since the recession started, it seems like a practice specialty worth considering.

Emily Elison, a criminal defense attorney with Portland’s Castleberry & Elison, was actively involved in the animal law program as a student at Lewis & Clark Law School. Most of her cases involve people who drive while intoxicated or hurt other human beings, but she does get calls from clients who are charged with animal-related offenses. In her experience, however, most of her clients want to do the right thing but simply don’t have the resources to do so.

“What I see that frustrates me is, I think, a really low bar for some of the animal neglect stuff. With people having income difficulties now, the standards of when you are neglecting an animal are really low,” Elison points out. “I see people being charged who are not neglecting their animals; they just don’t have the money to take care of them. And these are people who are starving themselves.”

Chris O’Connor, an attorney with Metropolitan Public Defender in Portland, says his office has had multiple clients who were charged after trying to access services like the humane society.

“They don’t offer free care to people unless the animals are turned over, and sometimes if you refuse to turn them over criminal charges follow,” O’Connor says.

Stacey Reding, with Portland’s Multnomah Defenders, has had four animal abuse and neglect cases since she started practicing in 2008. All of them have involved low-income people who couldn’t afford to take care of their animals. She, too, wishes the humane societies would offer free or low-cost food and services to those who adopt animals rather than choosing to prosecute them for neglect.

“There are a lot of well-meaning people, and I would be very happy to see the humane society putting less money into prosecution of those cases and more money toward helping people care for their animals in the best way possible,” Reding says.

“So many Portlanders love animals, and that’s a wonderful thing but it means these cases are really charged emotionally,” she adds. “My clients are not villains, they’re just poor people.”

ABOUT THE AUTHOR
Melody Finnemore is a Portland-area freelance writer.