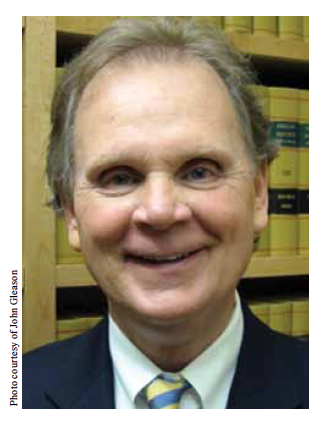 In 2010, the Arizona Supreme Court appointed John S. Gleason as an independent bar counsel charged with investigating and prosecuting allegations of widespread, serious misconduct in the Maricopa County Attorney’s office.

Maricopa is not some backwater county in a remote part of a desert. It is home to Phoenix and is gigantic, with 4 million people, a $2.5 billion budget and a well-known sheriff, Joseph Arpaio. And the case Gleason successfully worked on, to investigate allegations that the county’s elected prosecutor abused his powers to attack his political enemies, is considered perhaps the most significant attorney-disciplinary case ever conducted.

The ABA Journal, in a lengthy article on the topic last year, characterized it thusly: “There has been nothing before — in scope and import — like this spectacle. ... Many professional responsibility lawyers consider this the mother of all discipline trials, though technically it was an administrative hearing.”

Gleason, who at the time was working as regulation counsel for the Colorado Supreme Court, joined the Oregon State Bar staff in March as disciplinary counsel and director of regulatory services. He considers the two-plus years during which he spent the majority of his waking hours on the Arizona case — while also still maintaining his workload back home in Colorado — one of the most challenging, difficult, yet rewarding endeavors in his career to date.

During an eight-week trial “under adverse conditions that received significant national attention, Gleason never failed to exemplify professionalism in the pursuit of justice,” proclaimed the National Organization of Bar Counsel. That organization honored “his many years of dedication and noteworthy contributions to the legal profession” with the 2013 President’s Award in February, while stating: “Gleason’s career commitments in the areas of legal ethics, professional responsibility and disciplinary enforcement have distinguished him among his colleagues. His intellectual honesty and unwavering ability to temper justice with compassion exemplify the finest attributes that can be exhibited in over 25 years of service in the field of attorney regulation.”

For two years investigating the charges, Gleason put in 84-hour weeks and, along with colleague James Sudler, endured pressure and harassment reminiscent of a Mafia tale. For security reasons, both lawyers registered under assumed names and stayed at many different hotels while in Arizona. Gleason and his family, which remained in Colorado, received “hundreds of death threats,” he says.

“When I got the call, I had no clue what we were really getting into,” he recounts. “Within a few days, they had made every effort to intimidate us and follow us.” The two attorneys questioned 100 witnesses, many of whom wept during their responses, due to the way they had been treated by the defendants in the case. Gleason and Sudler filed a formal complaint alleging 33 separate counts of misconduct against County Attorney Andrew Thomas and two deputy county attorneys. County attorneys in Arizona are in charge of criminal prosecution, as well as handling civil matters and representing the board of supervisors.

“The rule of law was essentially gone in Maricopa County,” he says. “We had the weight of the community on our shoulders. They saw that someone was going to clean up this mess.”

In April 2012, when an Arizona Supreme Court disciplinary panel disbarred Thomas and his top deputy, Gleason felt tremendous gratification seeing the reaction of so many people who had been harmed by the abuses of power that, in the verdict, the panel concluded had occurred.

In many respects, John Gleason had been preparing all his life for the stressful case and surrounding events he confronted in Arizona.

Growing up outside of Toledo, Ohio, in a close-knit Irish Catholic family, he describes his upbringing as “hardscrabble” and says, “I was not an easy kid to raise.” Gleason played football all through high school and, after scoring well on a test, became a police officer, first in northwestern Ohio and then in Denver.

Just a year after he began police work, Gleason sought training as a bomb technician — someone who dismantles bombs before they explode. The training of nonmilitary bomb technicians began in earnest in the early 1970s after many bombings in Cleveland and Toledo by organized crime led to the critical need, he says. Gleason underwent top-secret training in Huntsville, Ala., by U.S. military and Israeli bomb experts and then continued as an active bomb technician and homicide detective for 11 years in Ohio and Colorado.

Gleason had earned an undergraduate degree at Bowling Green State University while serving as a policeman, and after more than a decade he was “tired of dealing with police work and a lot of ugly, bad cases.” He applied for and was accepted by both the FBI and law school but chose to pursue law. He clerked in district attorneys’ offices his second and third years at Ohio Northern University Claude W. Pettit School of Law, but found he didn’t want to pursue that route. Instead, he joined a law firm in Denver.

After a couple of years of private practice, he went to work for the Colorado Supreme Court Office of Disciplinary Counsel, where for a decade he prosecuted more than 150 cases involving attorney discipline, judicial discipline or unauthorized practice of law. The court then appointed him regulation counsel, where he headed an office of 22 lawyers and 70 staff members from 1998 until February of this year.

Gleason implemented a system that became a model for other states’ attorney regulation systems. He says Colorado is one of only about 10 to 15 states in which attorney discipline is not delegated by a state’s supreme court but instead is handled as part of the court itself. The remaining states, including Oregon, run systems known as a unified bar, in which the state’s supreme court delegates disciplinary responsibility to the bar. Each type of system has its advantages and disadvantages, he says.

When Gleason took charge of the office in Colorado — overseeing a bar of 39,000 members — he began focusing on major discipline cases, those involving the most serious forms of misconduct, such as conversion of client funds, abandonment of clients or criminal conduct by an attorney. He also: developed a diversion program that focused on correcting whatever the lawyer’s problem was; created a central client-assistance office to quickly and efficiently address concerns of the public or clients; set a standard of addressing concerns within 10 days of receiving a complaint; created an Office of the Presiding Disciplinary Judge to improve the consistency of opinions and speed up the system; and undertook a strong outreach to the practicing bar to help members understand the improvements and changes that needed to be made.

“Our job is to protect the public from lawyers who are engaging in misconduct,” he explains. In addition, the disciplinary office investigates and, if necessary, prosecutes cases of lawyer misconduct, as well as educates the public about the office. “I think, along with the ability to self-regulate, comes the requirement to be absolutely transparent,” he adds.

Gleason already has met with the members of the Oregon Supreme Court, but he says he is too new to “have a clear idea yet” of what changes he plans to recommend should be made in Oregon. However, he says, “We are looking at potential rule changes to streamline and move cases more quickly.”

Gleason has long been active in numerous organizations, including serving as a past president of the board of directors of the National Client Protection Organization. In addition to receiving the National Organization of Bar Counsel award this year, he was the 2013 recipient of the American Bar Association’s Michael Franck Award. Commenting on that honor, Arizona Chief Justice Michael L. Bender said Gleason “embodies the traits to which all of us who serve the public aspire. I can think of no other judicial employee who has contributed more to the betterment of the profession than he.”

Gleason has served as a member of state consultation teams appointed by the ABA’s Center for Professional Responsibility. He also has consulted with several states, including Arizona and Oregon, on ways to improve their disciplinary programs and procedures. “Oregon has adopted many aspects of the Colorado system,” he notes. After Arizona examined Colorado’s system under Gleason, that state “adopted almost entirely” the Colorado model, he says.

OSB executive director Sylvia Stevens says of Gleason: “In his years as a bar regulator, John has earned a well-deserved reputation not only for his legal skills, but as well for integrity, innovation and enthusiasm. We are fortunate to have him join our team, and I am confident that the ideas and energy he brings to the bar’s most important work will serve the membership and the public well.”

Gleason and his wife, Karrie, are “learning to love Oregon,” which he calls “a truly remarkable state.” But he cheerfully admits to not being used to “so many trees,” which he has found disagreeable to his allergies during the heavy pollen season.

His wife continues working as a school administrator in Cherry Hills, Colo., with the couple exchanging commuting visits on weekends. They have two sons, both training to become attorneys: John Jr., a 1L at the University of St. Thomas School of Law in Minneapolis, and Adam, a 3L at Gonzaga University School of Law in Spokane.

Since joining the OSB staff, Gleason has been working 60- to 70-hour weeks, but whenever he can spare the time, “I’ll play golf with anybody who asks,” he insists. He also will make himself available to speak to local bar associations or anyone else who needs a speaker, he says.

Referring to his new position, Gleason says: “I’m absolutely honored to have been selected. I truly enjoy working with lawyers.” He adds that, notwithstanding his duty to regulate those who go astray, he hopes to meet as many individual Oregon attorneys as possible — in a social setting.