'Lean In,' or Step Back?
By Steve Bush 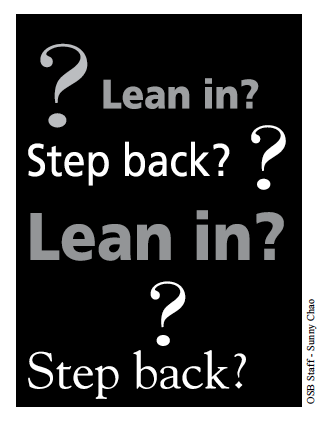 Several colleagues are currently reading Facebook COO Sheryl Sandberg’s book Lean In. Its central premise is that women in the workplace should participate more or “lean in” to get ahead professionally. I will admit I’ve read more reviews of the book than pages in it so far. According to a meta-review in Britain’s The Telegraph, Lean In is either a must-read feminist treatise, marginally useful advice from someone who can afford one heck of a nanny, or something in between. If I ever finish reading it, I’ll try to make up my own mind.

In the legal profession, we always seem to talk about family and work-life balance as “women’s issues.” Yet, a number of surveys show that the number of stay-at-home dads in America has doubled in the last decade. When we frame something as a “women’s issue,” are we to assume that men don’t care as much about family or don’t want a work-life balance? If we label family and work-life discussions as women’s issues, aren’t we cementing in place these outdated stereotypes?

In late 2010, my wife and I welcomed our son to the world. Like all new parents, our solar system quickly re-aligned itself until we orbited his brilliant star. My wife took as much leave as we could afford, and I planned to request the full 12 weeks of parental leave permitted by the Family Medical Leave Act.

Asking around for advice, I received pessimistic counsel from friends, colleagues and law school classmates. Requesting three months off to “play Daddy” would send the wrong message. FMLA was just for the women. Men are supposed to take a few days off and get right back to their desks. Did I want to commit career suicide? In sum, it definitely wouldn’t be “leaning in.” But I had faith in my employer, and I think they had faith in me. My parental leave was processed in the usual way. When both my wife and I returned to our careers, we hired a nanny to watch our son.

But by the time our son was 9 months old, we were done with the nanny-go-round. My wife loves her career as a pediatrician, but she has a demanding schedule with long days and frequent night call. As to me, I simply missed my son too much. Not knowing what else to do, and expecting that anything short of my departure would be an unreasonable burden to my firm, I wrote my resignation letter.

Then something funny happened on the way out the door. The friends and colleagues in my practice group handed my two weeks’ notice back to me and told me to wait. They leaned in on my behalf, to keep my skill set within the firm while trying to accommodate our family’s major life change. Discussions occurred and a new contract was written.

Two years later, I remain a stay-at-home dad and very part-time lawyer on contract with the same law firm I’ve been with for nearly a decade. Most of my computer time occurs while my son is asleep or at preschool, and the work is very much feast or famine. One month last year I billed five hours and in another I billed 50. Some of my projects are fairly pedestrian while others force me to stretch and keep learning. I try to write or speak on healthcare topics about once a month for marketing and networking. But on Wednesday each week I am a shift parent at our son’s co-op preschool. During spring break he and I toured the Columbia Gorge waterfalls and day-tripped to the beach. Inspired by endless adventures with Thomas the Train, we joined the Oregon Rail Heritage Foundation. We vacuum, do the shopping and make dinner for Mom each night. It’s our own kind of work-life balance, I guess.

As the debate over Lean In continues, this stay-at-home dad and very part-time lawyer first wonders if it’s possible to hold these discussions in a gender-neutral way. Men who choose to be the primary caregiver for their children struggle equally with all of the issues raised by Sandberg, and professional women without children struggle with these issues far less. So, it’s not primarily about gender — it’s mostly about professionals who do or don’t have families (or who want a more sane blend of life and work), irrespective of their gender.

Second, if we’re always “on” or we’re never taking off our lawyer hats, what exactly does it mean to “lean in”? Are we supposed to be leaning away from something? Can we still lean in to things that have nothing to do with work? Might we perhaps stand still? What about lying down? Better yet, what if we all just stepped back? And there’s the title for a counter-manifesto: Step Back. Before leaning in, let’s all take a step back. What do we want from life, the profession and our relationships with the people who matter to us the most?

ABOUT THE AUTHOR
Steve Bush is a healthcare attorney at Schwabe, Williamson & Wyatt in Portland.