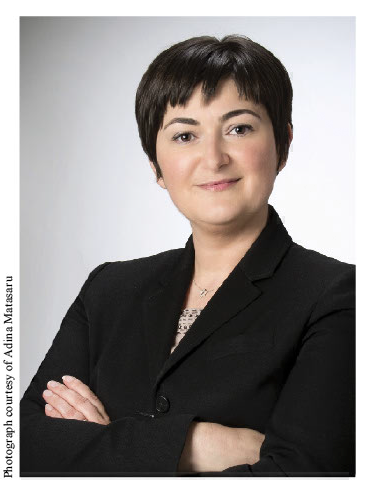 As a young girl growing up in Romania under the dictatorship of Nicolae Ceausescu, Adina Matasaru learned early on about the injustice, discrimination and persecution in the world. She also knew by the time she was 5 that she wanted to become an attorney.

“My father always taught us that laws should be just and made to ensure protection, not oppression, of the citizenry,” she says. “I wanted to do good and bring justice in an unjust place. I wanted people to be protected, not hurt, by laws and government.”

Matasaru’s family fled Romania and took shelter in a German refugee camp. The U.S. granted them political asylum and, in 1992, Matasaru moved to New York with her father, mother, older sister and younger brother. They stayed for about three months before the violence in their Queens neighborhood convinced them to move elsewhere. Matasaru’s family had a friend in Dallas, Texas, who encouraged them to move south where her parents could work in a print shop.

“I was 17 when we arrived (in Texas). I didn’t speak the language, didn’t understand the culture and didn’t have any support from anyone. I went to summer school to learn English and then started my senior year at South Garland High School in Garland, Texas. I felt as if I had landed on another planet,” Matasaru says.

Amid the strangeness and the culture shock, however, Matasaru met the young man who would one day become her husband. Daniel Schulze, a shy Korean-American boy who sat behind her in physics class, became her best friend. Then, just days before her graduation, Matasaru’s parents informed her that the family was moving to Portland.

“That was not part of my plan. I had a near-perfect GPA and I wanted to go to college,” she says. “My older sister had gotten married by then, so she was gone. But my parents needed my brother and I because they didn’t speak English. I always felt Daniel was my soul mate, but I had to take care of my family. There was no other option.”

In the summer of 1993, the family again trekked across the country with their belongings in a U-Haul and the promise of a job for Matasaru’s father. When they arrived, though, he was told he didn’t speak English well enough for the job. The 18-year-old Matasaru and her family became homeless.

“We would go from a friend’s house to another acquaintance’s house, whoever was merciful enough to let us sleep on the floor,” she says, adding the family slept in its Chevy Astro van when they felt they had worn out their welcome with friends.

Matasaru and her mother eventually found work in an adult foster-care home, whose owner let the family sleep in the attic at night. During the day, the women took care of five adults who had brain injuries, and Matasaru attended Mount Hood Community College at night. She then transferred to the University of Portland, where she earned a bachelor’s degree in interdisciplinary studies that allowed her to combine her interests in philosophy, theology and political science.

As a law student at Willamette University, Matasaru continued to help care for her parents, both of whom battled cancer. They had returned to Texas and she would fly back to visit them as often as she could. All the while, she kept looking for Daniel.

“We stayed in touch for a while, but it was strained. He told me he sent me flowers after I left and I never got them because we were homeless,” Matasaru says. “I didn’t have any contact with him for a long time, but I kept posting notes on our high school alumni board and asking acquaintances about him. I called every Schulze in the state of Texas.”

Finally, Matasaru received an email from Daniel’s sister, who hadn’t known of Matasaru’s search for her brother but merely wanted to reconnect and wish her happy holidays. “I called Daniel and he made me wait three days before he called back,” she says, adding he moved to Portland three months later and the pair was married in 2005. “Being married to Daniel is like living in a fairy tale every day; he sustains me through it all.”

Her professional life took flight as well. When she began her legal career, Matasaru knew she wanted to do transactional work. She had spent a semester abroad at a private law school in Hamburg, Germany, where she learned about international transactions. And she worked for a year as a case assistant in mergers and acquisitions at Stoel Rives. Then she met Judge Darleen Ortega.

“Adina was the first law clerk I hired. Although English is her third language (after Romanian and German), she speaks and writes English better than most people,” says Ortega, an Oregon Court of Appeals judge. “Between that and her native charisma, I pegged her for a trial lawyer pretty quickly — but she did not believe herself to be headed in that direction. I like to take credit for redirecting her,” she notes with a smile.

Matasaru laughs as she recalls her preference for the “clean law” of transactions rather than the “dirty law” of litigation.

“Judge Ortega very wisely and gently pointed out what my strengths were, and the one thing she asked me to do was find a firm that would let me do both litigation and transactions,” she says. “I joined Harrang Long, and within six weeks I started doing litigation for Frank Moscato and never looked back. Frank taught me everything I know about being a professional and practicing with integrity. Judge Ortega, as always, was correct.”

Matasaru took some time off from practicing when her son Gabriel, now 6, was born prematurely and battled an auto-immune disorder. After the birth of her second son, Mikha’el, now 2, she returned to practice at Dunn, Carney, Allen, Higgins & Tongue. She credits the firm and especially Jay Chock, a partner in the firm, with giving her a chance and encouraging her to live up to her full potential.

“After being out of practice for a couple of years, I became uncertain of my own potential. Chock’s trust and belief in me was so important; it gave me courage to prove that women can return to active practice after an absence and still accomplish great things,” she says.

When the opportunity arose, Matasaru decided to join Chock and another Dunn Carney colleague, John Barhoum, in starting a new firm. Chock Barhoum LLP opened March 1. She says it presented an opportunity to have greater control over her career and to build a firm that is grounded in diversity. The firm is over 75 percent female and made up of lawyers and staff who are Native American, Hispanic, Jewish, Indian, African American and Arab.

“Every person brings something unique to the table and it’s amazing how much better we are when everyone offers a different perspective,” Matasaru says.

With Chock Barhoum, she is a civil defense litigator, emphasizing complex civil cases like large fraud and RICO claims or wrongful death cases. She is currently defending a variety of Uniform Trade Practices Act claims and also handles some “garden variety insurance defense” — anything from car accidents to officers’ and directors’ liability to mold exposure. She says, “I love the variety I have, which keeps me learning something every day.” Most recently she has had to become an expert in family day cares, E. coli and asphalt production, and views all of it as opportunities to be challenged daily.

“When I was a child, I wanted to change the world. Now that I am older and more realistic, I strive to change the world of my family, my clients and my profession,” she muses. Between all that and caring for her parents too, Matasaru admits she doesn’t have much free time. She does have a favorite pastime when the opportunity arises, however.

“I have a passion for salsa dancing! Sadly, Daniel and I don’t have much time for it. Only 16 more years until the youngest leaves for college,” she says with a laugh.