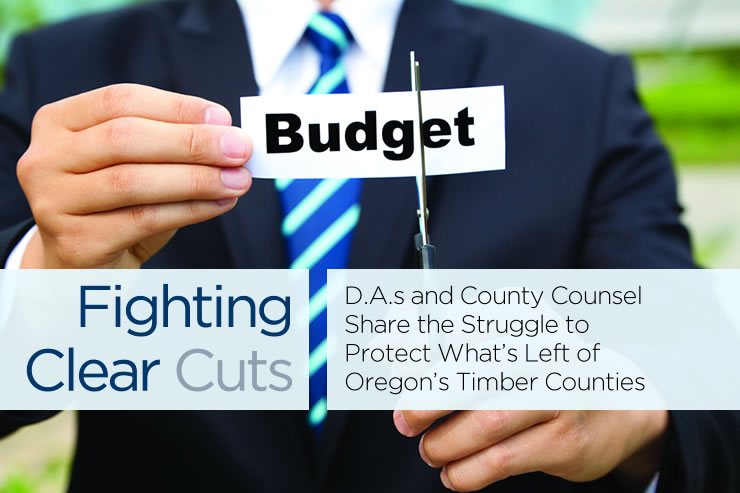 
Lane County Counsel Stephen Dingle remembers the first time he worked for Lane County: He was a law student helping with prosecutorial work after budget cuts had forced the district attorney’s office to lay off assistant DAs. The same year, the Lane County sheriff protested inadequate funding of his department by parking county patrol cars in downtown Eugene and leaving the headlights on until the batteries went dead.

That was in the early 1980s, the “first time Lane County was gutted,” Dingle says.

Today, Lane, Josephine and Curry counties are among the struggling Oregon timber counties referred to by some as zombie counties — the walking dead. The three counties in southwestern Oregon, lush with timber and once thriving thanks to federal payments from the 1937 O&C Act, have had their economic foundations chewed to sawdust as logging on federal lands has plummeted and voters refuse to raise property taxes. Douglas and Coos counties, along with other Oregon timber counties, are struggling in varying degrees as well.

Lost in a Sea of Need

County counsel and district attorneys, along with virtually every other county service provider in the most severely affected timber counties, are trying to maintain at least the minimum of mandated service, protect their employees and the county from growing liability, and determine whether it’s possible to somehow work smarter and harder to achieve more with what’s left of their splintered departments.

“We’re lost in a sea of need,” says Alex Gardner, Lane County district attorney, who has been in the DA’s office since 2001 and has served as district attorney since 2004. “Curry and Josephine County are in terrible distress. All these systems are in extremis.”

Voters in the timber counties have become accustomed to the low tax rates and now resist raising them. Meanwhile state Ballot Measures 5, 47 and 50, implemented in the 1990s, limit the amount property taxes can be increased. Compression holds in check the amount of any increases that do pass.

Gardner pinpoints the start of Oregon’s timber county crisis as 1981. The U.S. was mired in a recession that hit resource-dependent communities particularly hard. Between 1979 and 1982, the bottom fell out of the wood-products market and lumber prices dropped more than 48 percent, according to the Oregon Historical Society. By the mid-1980s, 48,000 jobs in the Pacific Northwest lumber industry were gone.

On the recession’s heels came legal battles over protecting the spotted owls’ habitat and other environmental aspects of harvesting Oregon’s old-growth forests, resulting in timber sales being halted or dragged out by appeals and law suits.

Everett Dial, district attorney in Curry County where voters on May 21 turned down a tax levy to fund law enforcement, lists the looming effects of the recently defeated levy. “There’s talk of the jail closing, dispatch shutting down. Once the jail shuts down, that shuts down the courts for practical purposes as far as criminal cases. We can still file charges, but what happens if criminals don’t show up in court? Nothing. No one gets arrested if there’s no jail to put them in.”

Closing the jail may hold additional financial implications for Curry County. Once closed, the jail may not be able to reopen because the building does not meet several state and federal mandates. (It has been grandfathered in due to age as long as it stays open.) The Curry County sheriff estimates it could cost up to $30 million to build a new jail.

“Folks don’t realize the services the county provides and the organizations that rely on those services,” Dial says of voters. For instance, cities in Curry County — Gold Beach, Port Orford and Brookings — do not have jails; they rely on the county jail to house criminals. The cities don’t have prosecutors’ offices; they rely on the district attorney’s office to prosecute offenders. “When they dial 911, it’s not an FBI agent who shows up at the door; it’s a county deputy or city officer.” He notes that the sheriff is concerned about liability if they can’t provide service.

Jerry Herbage, Curry County counsel since the mid-1980s, is reportedly the longest serving county counsel in Oregon. He has served twice as the president of the Oregon County Counsel Association, is on the local school board, the library board and the school foundation. He too worries about county liability over everything from proper back-up for the sheriff’s deputies to workplace safety for employees.

“There are major infrastructure problems,” he points out. “The county courthouse and the jail are nearly 60 years old. There’s no sprinkler system in the jail. We need a new roof on the annex, the court house, the sheriff’s office and the Colvin Street property. We have had a lot of leaking. With 80 inches of rain a year, the roofs get put to the test.” He recalls an incident in 2011, when water was flooding the basement of the courthouse where the building’s electrical components are housed, creating a potential safety hazard.

Likewise in Lane County, Dingle worries about liability. Surveys on road conditions used to be conducted annually and now are done every three years. Vegetation maintenance has been cut back. Dust abatement on gravel roads has been mostly discontinued. Vandalized road signs are overlooked because staff doesn’t exist to report them.

Yet people complain. “The county is being forced to make changes. Our managers now ask what has to be done. Departments are very focused and very specific on determining what needs to be done rather than what would be nice to do.”

Other Duties as Assigned

Herbage’s job is constantly reshaped by the county’s financial situation. In addition to the typical counsel responsibilities of advising county commissioners and department managers, and representing the county in civil matters, he serves as the risk manager because the county no longer has one. He runs department head meetings because there’s no county manager. He used to have an assistant county counsel, but she left for a job in Portland last year because Curry County’s tenuous financial situation scared her and her prosecutor husband.

Herbage reports that, according to Curry County’s HR director, 27 of 167 FTE resigned or retired in 2012. The Curry County undersheriff left recently and the county elections person left for a job in Marion County. Curry County’s public service department, which includes planning, building and sanitation, has been reduced repeatedly, shrinking from three full-time planners a few years ago to one part-time planner who has been called back from retirement and has to work fewer than 20 hours a week to retain his retirement benefits. The assessor’s office has been reduced from 12.6 FTE in 2007 to seven FTE today, limiting the county’s ability to collect the taxes it desperately needs to provide services.

All of this adds to Herbage’s load. “When services are cut, there’s a greater chance of lawsuits, especially when employees are laid off,” he says. “You have to gear up and make sure you do things right.”

Laws the Same, Regardless of Money

In hard-hit Josephine County, another timber county where voters recently defeated a public safety levy, assistant county counsel Leah Harper finds her job changing too. As funding is cut, staffing is cut and the county counsel’s office fields more calls from department managers about procedures, documentation and mandated services. The office also conducts more research for the board of commissioners as commissioners explore new funding sources and ideas. She notes her days are getting longer and longer.

“Our county has faced a lot of cuts. We’ve cut to the bone and there’s nowhere else to cut,” Harper says. Still, the county has to carry out its mandates. “Laws regarding liability are the same, regardless of whether you have money or not.”

A Teeter-Totter of Risk

The loss of staff expertise and supervision also affect quality of service and increase liability according to Lane County D.A. Gardner. He brings the unique perspective of a district attorney who has also served as the county’s acting county counsel. He has been a guest presenter in a public policy and management course at the University of Oregon.

“A best practices operation requires adequate staffing,” Gardner says. “When you eliminate management to the point where the worker-to-supervisor ratio is 10-to-1, you increase risk. Lane County is hovering on a teeter-totter, balancing workload, overtime costs and risk. We’re well into the red zone in all three areas.”

Lane County counsel Dingle agrees. “When people are asked to do more with fewer people, there’s a chance things will fall through the cracks. In the rush to get day-to-day business done, things fall to the wayside because managers just need to get the job done.”

Dingle is struck by the contrast between how Lane County could function during what he refers to as the halcyon days of timber receipts and now. “When the public service building was built in the late 1970s, the county just wrote a check! They didn’t fund it through a bond measure. They were able to write a check!” The new building was filled with staff for county programs, many of which today have been eliminated or spun off to nonprofit contractors. “If you walk through the building now, huge portions are empty,” he says. “It’s very visual.” Some of the excess space is being leased to the city of Eugene.

Yet Lane County is considered fortunate by some because its public safety levy passed on May 21. The levy covers the staffing costs to expand the jail’s diminished capacity by 120 beds and add 16 beds to the juvenile justice center.

“There’s Always Going to be Government.”

Gardner is grateful the levy passed, but his perspective is colored by recognition of the scope of the county’s funding crisis. “This will boost our corrections capacity up to one-third of the Oregon average, so we’ll be able to hold the most violent offenders pending trial,” he says.

In Eugene, Lane County Sheriff Tom Turner and county commissioners Jay Bozievich and Pat Farr all described the levy as only “a first step” in rebuilding the county’s public safety system. “It does nothing for the D.A.’s office, police investigations or patrol deputies,” Gardner notes. It also does nothing for other county services.

“People get the government they pay for,” says District Attorney Dial of Curry County. “The issue isn’t whether you want government. There’s always going to be government. The question is whether the public wants a democratic one or not. Humans living in a society always have some form of government. It may be a Mexican drug cartel or your neighbors. Even in a family, there’s going to be a structure governing who can do what. If there’s a vacuum, something will fill it.”

County district attorneys and county counsel are hoping their efforts will stave off the vacuum until the state and federal governments sort out the issues related to inadequate property taxes and timber revenue. “It can be frustrating,” says Dingle, “but people have sat down and rolled up their sleeves and said, okay, how are we going to do this? And along the way, we might discover some new ways of doing things. The ultimate solution is beyond our control. We can make our small adjustments, but the real solution lies in Washington, D.C.”

ABOUT THE AUTHOR
Karen McGlone is a freelance writer who writes frequently about the legal industry.