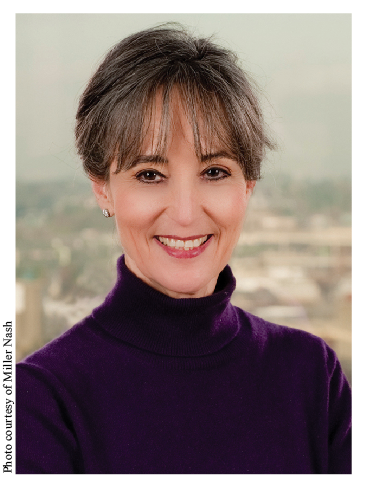 Chris Helmer justifiably could take pride in having blazed a trail for so many other women in Oregon. But she doesn’t look at it that way.

“When I think about it, I feel pride in them,” she says. “I happened to be the right kind of person and to come along at a time when the legal profession was in transition when it comes to women. There are many women today who would have accomplished the same as I did were they there at that time, or perhaps more!”

Moreover, Helmer, who has been at Miller Nash from the beginning of her legal career, was one of the first two women to become a partner in a large Portland firm, Karen Creason at Stoel Rives being the other, both in the same year, Helmer recalls. It was in the early 1980s, and big local firms were just starting to hire female associates, she says.

Later, she also gave Miller Nash an international law specialty, according to Thomas C. Sand, a lawyer at Miller Nash and former managing partner of the firm. “She has reinvented her practice several times,” Sand observes. In 1997, when Oregon’s global business was expanding significantly, Helmer, then in her late 40s, moved to New York City for 10 months to obtain a master of laws degree in international law from Columbia University, while maintaining a reduced practice and serving, through Miller Nash, as in-house counsel to a multinational subsidiary.

“That was a big undertaking, going back to being a full-time student,” says Sand. “I don’t know many people who would do something like that. And thanks to her, we have an international law practice.”

It became her major specialty, Helmer says. “I was doing some work in that area, but after I got the LL.M., that’s pretty much all I do.”

M. Christie Helmer was born in Portland and grew up in Seattle and Tacoma, Wash. Neither of her parents finished college, and “they weren’t all that big on education,” she says. But “I was a smart kid growing up; I never doubted that I would go to college.” Her family had to make some sacrifices to help pay for her to attend, and she worked her way through, too. Once she got there, at Washington State University, Helmer was “impatient” in Pullman and completed her degree in English in just three years, graduating at the age of 20.

“My senior year, I was in the placement office trying to figure out what I was going to do,” she remembers. Sunset magazine was recruiting, but it wanted journalism graduates. A Gonzaga University School of Law recruiter came in and told her, “We’re looking for good students.” She talked to him. She considered how she liked solving problems and working with people. “I wanted to be able to support myself,” she says, so she applied and got accepted, without taking the LSAT.

Helmer worked at Gonzaga full time while attending law school, then took summer jobs as a barmaid after turning 21. After two years at Gonzaga, she met a man who was moving to Portland.

“We decided to get married, and I transferred to Lewis & Clark (Law School). I was very happy with the switch,” she says. “I really liked Lewis & Clark. I felt it was a better fit for me.” She worked a three-fourths-time job and attended law school at night. In her third year, she got a clerkship at Miller Nash, and while she was working there, a partner in the firm, Dean D. DeChaine, discussed with her an unfamiliar problem concerning an international case. Helmer responded: “I think I know the answer to that. I just had a class on that.”

In 1974, Miller Nash hired Helmer, who was the only female lawyer at the firm at that time. DeChaine became her mentor, and she started doing maritime work. “He never treated me any different from anybody else,” she recalls. Helmer found herself climbing ship ladders in the middle of the night and doing all sorts of similar tasks. “He was sure I could handle it and that it was the way I wanted to be treated, and it was.”

Likewise, during her service on the OSB Board of Governors, for which she was elected treasurer, and the Oregon State Board of Bar Examiners, she was treated well by the other members, but “they didn’t know quite what to think,” Helmer relates. “Men weren’t used to dealing with women lawyers. They were curious; they all were interested to see what it would be like.” She credits now-retired Portland lawyer Leonard A. Girard with recruiting her for the Board of Governors — and also indirectly helping her meet her husband of more than 30 years, now-retired Portland attorney Joe D. Bailey.

Helmer is AV-rated by Martindale-Hubbell, has been listed in The Best Lawyers in America for several years, and selected in Oregon Super Lawyers in the international, business litigation and transportation/maritime practice categories. Lewis & Clark Law School, where she taught for a decade, named her the school’s “Distinguished Graduate” for 2008.

“I’ve known her since 1976,” says Sand, “and I’ve never seen her that she wasn’t calm and warm, a kind and good-hearted person. I think in our business it can be a daily challenge, because you’re dealing with people in a conflict situation.” Even when Helmer is facing opposing attorneys who possess an aggressive, confrontational style, “I’ve seen her handle those people just fine, and eventually they warm up to her,” he says.

An especially gratifying personal experience that resulted from her international work was befriending and supporting a Chinese student to help her obtain a U.S. law degree. Helmer and her husband were teaching a class in China in 1995 when they met a student, Yan Jiang, who subsequently lived with them for four years while attending Lewis & Clark Law School, after the couple sponsored her and helped her obtain a scholarship. After completing her studies and gaining her law degree, Jiang returned to China, married, and now is general counsel for the Boeing joint venture in Shanghai.

Helmer and Bailey stay in close touch with her, and Jiang “is like a daughter to me,” Helmer says. Jiang and her husband named their son after Bailey’s brother.

Helmer relishes foreign travel and encountering other cultures, both for her work and on her own time, and was out of the country five times during 2012. She knits and enjoys competing on a grand scale with her husband in serial Scrabble matches. Helmer also is an admirer of design in any form — architecture, jewelry, home furnishings and craft. She is past board chairwoman of both the Oregon College of Art and Craft and the World Affairs Council.

“I’ve been really lucky in my career,” Helmer reflects. “I ended up with a group of people I really like. I’ve met a lot of young people I enjoy working with.”

One of those is Ambyr O’Donnell, general counsel for Tripwire, based in Portland. That Helmer “charted her own path, developed her own type of practice, definitely is inspiring to new lawyers,” O’Donnell says. “I look at her as a model and mentor, how she solves problems. She has a unique blend of courtroom presence, professionalism and approachability. Lots of us have one of those things, but she has all those.”

One aspect of Helmer’s practice that gives her the most satisfaction is “teaching people about the law who don’t understand it.” She feels she is particularly adept at this owing to her own early experience of learning business law on the job. Teaching business people to understand the law is a challenge, she admits, and “if you add to that a different culture, it gets even more complicated.”

However, she adds, the only way business clients can make informed choices and evaluate risks is if their lawyer casts aside the legalese and leads them to that understanding.