Message from the President

Key Initiatives for 2013:
The Board of Governors' Agenda for the New Year
By Michael E. Haglund 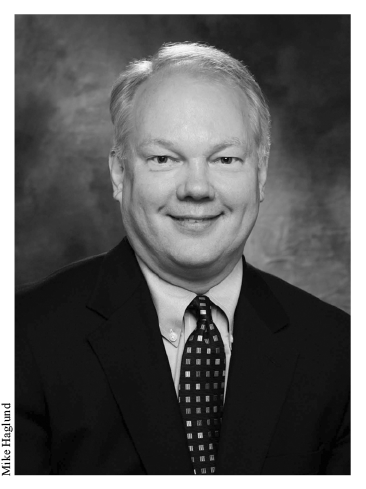 Happy 2013! The Oregon State Bar Board of Governors has an ambitious agenda in store for the new year. At our annual planning retreat in November, the board decided to focus on three major year-long initiatives: 1) develop a statewide coalition to support better funding for our state courts; 2) push an aggressive legislative agenda to improve funding for Legal Aid; and 3) implement the action plan developed by the Legal Job Opportunities Task Force.

While supporting the judicial branch is always one of the bar’s top priorities, it has historically been accomplished on a year-to-year, ad hoc basis that varies in effectiveness in the Oregon Legislature. The objective in 2013 is to institutionalize a broad-based coalition of bar and business leaders that maintains an active organizational presence over the years, similar to the successful advisory board model utilized by the Campaign for Equal Justice. By the time this article is in print, we will have rolled out a new organization that involves key leaders of the organized bar, private practitioners, corporate counsel and retired judges and public officials.

We plan to work closely with Chief Justice Tom Balmer to utilize the sophisticated messaging developed by the ABA Task Force on Preservation of the Justice System co-chaired by David Boies and Ted Olson. The coalition will also organize meetings with Oregon newspaper editorial boards and write targeted opinion pieces for submission to the newspapers at key times. The Multnomah Bar Association is making a significant contribution to the overall effort by funding a public relations firm to assist in our lobbying efforts during the 2013 Legislature.

In 2013, the Oregon State Bar will be pursuing a three-pronged agenda in support of Legal Aid. First, we will be striving hard to maintain the current level of filing fee revenues that is directed to Legal Aid. Second, we will be lobbying for an expansion of the IOLTA program to include interest on title company escrow accounts. Twelve other states have these programs in place already, including Washington. Third, Speaker of the House Tina Kotek has agreed to introduce a bill that would provide all contributors to the Campaign for Equal Justice with a 50 percent tax credit. The bill is modeled after a similar credit that benefits the Oregon Cultural Trust. We hope to convince the Legislature that having the general fund match the dollars raised by Oregon lawyers for Legal Aid is a great way to promote increased giving by lawyers and other Oregonians to support a vital social program while limiting the impact on the state budget to half of the funds raised.

The OSB’s Legal Job Opportunities Task Force met four times as a committee and on October 30 held a summit conference to examine the various proposals under consideration by the task force. Based on the feedback from that conference, the task force recently issued its final report recommending that the Board of Governors pursue a four-pronged effort to address the jobs crisis in our profession. The four proposals include: 1) a substantial expansion of the OSB modest means program; 2) improved access to law office management expertise by establishing a weekly evening class at each of Oregon’s law schools staffed by volunteer senior lawyers; 3) establishment of a program to match new practitioners with soon-to-retire attorneys; and 4) enhanced practical skills training.

During the years of the Great Recession, 50 percent of U.S. law school grads have been unable to find full time work in the profession. The situation here in Oregon is no different. The Oregon New Lawyers Division has done some great work trying to address the lack of job opportunities and the need for training and mentoring for the influx of new solo practitioners, but the scope of the problem is so vast that the entire organized bar in Oregon needs to step up and pursue a mix of programs to address the legal jobs crisis. We had very significant involvement from each of Oregon’s law schools on the task force and the implementation of our four-part plan will require continued close cooperation with the law schools.

In addition to the above three major initiatives, the Board of Governors plans to coordinate a smaller scale project in each quarter. The ABA has made (but has not fulfilled) a commitment to plant one million trees in an effort to enhance the environment and address global warming. As the nation’s largest lumber producer, Oregon should do its fair share. In February or March, the OSB will be partnering with Friends of Trees to coordinate a weekend or two of tree-planting projects in Oregon where we provide the volunteer tree planters. We are working with the environmental law and sustainability sections to organize the project and recruit volunteers. Plan to come out for a day of public service, get your hands dirty and have some fun.

ABOUT THE AUTHOR
Michael Haglund, 2013 OSB president, is a Portland maritime, forest products and fishing law attorney. Read more about the new OSB president on page 21 of this issue of the Bulletin.