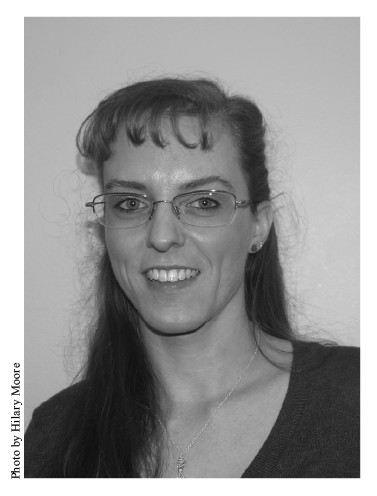 Amanda Ulrich is no stranger to hard work. At Swanson Thomas Coon & Newton, Ulrich is renowned for her knowledge and attention to detail as one of the top litigation paralegals. As founding Swanson Thomas Coon & Newton partner Ray Thomas describes her, “In the almost one and a half decades that she has worked in our office Amanda has become so well regarded in the litigation community that our opponents have told me they breathe a sigh of relief when they see she is on a case because they know she will be so thorough in responding to their requests for production.”

But her work outside of the office is just as impressive and spans the globe, touching the lives of people as far away as the Congo and Chile.

That’s a long way from Canby, where Ulrich grew up and attended high school. A member of the National Honor Society and president of the speech and debate team, as well as the Key Club at Canby High School, she also found the time to work part time at Thriftway. When she graduated high school, Ulrich already had 45 college credits under her belt. She never stopped working at Thriftway as she supported herself through Portland State University, graduating with honors and a degree in English literature. While at PSU, she also began working at Swanson Thomas Coon & Newton as a general office clerk. Ulrich’s skills and dedication soon became apparent and by 2002, she had worked her way into a position as a litigation assistant.

Although she hadn’t been with the law firm for long, Ulrich enthusiastically plunged into a pro bono project brought to her by this author, then a volunteer attorney with the Environmental Law Alliance Worldwide (ELAW). 1 Chilean ELAW partner attorney Miguel Fredes had been fighting for years to stop the illegal cutting and export of alerce, an internationally listed endangered hardwood related to the California redwood. Because Fredes could get nowhere in Chile trying to identify the culprits, he had decided to focus on the companies involved in illegal imports into the United States. An FOIA request had been submitted to the Department of Commerce, and after a long wait, many boxes of documents arrived. It would take a determined volunteer with a passion for detail to unearth the key documents.

Ulrich spent four hours every Saturday for what became two months, reviewing the documents. Page by page, she summarized each document, looking for dates, people, companies and organizations associated with export/import of the alerce from Chile into the U.S. Many of the documents were in Spanish, a language she did not speak, but she looked up the meanings of words in order to understand what the documents meant. She painstakingly cross-referenced pages that were related and established a pattern. Eventually she noticed she was seeing Baron Industries and Frank Pemberthy over and over again.

Looking back, Ulrich says she “absolutely loved going through a stack of documents in order to determine what story the documents tell. To me the project was like a mystery I had to solve. My job was to look at the evidence to see where the information led us, and in the end the “story” behind the crime.” She feels extremely honored to have worked on this project, explaining:

I was just a young professional trying to find my way in life, and at the time I did not fully understand that I was taking part in something with such far-reaching impact. I knew it was a personal risk for Miguel to pursue the legal case in Chile, and so I took my role in this project very seriously. I knew that Miguel had to have solid evidence to continue with his case, and so I made sure to summarize the stack of documents with the highest level of precision and accuracy, because there was no room for error on Miguel’s end.

When she finished with the boxes, Ulrich sent a memo highlighting her findings along with a detailed page-by-page summary to this author, ELAW and Miguel Fredes. She recalls Fredes sending her an email expressing his excitement at the findings, as well as a CD of his favorite Chilean band.

On Sept. 11, 2012, the Supreme Court of Chile unanimously confirmed a verdict against a regional leader in the center-right Renovacion Nacional party, for illegal logging and trafficking in ancient alerce trees.

After this triumph for the prosecution, Fredes who has pursued the case for more than a decade, knows there is still work to do. “Now our challenge will be to work with international lawyers in order to find a way to hold those who purchased alerce illegally overseas accountable,” he told The Santiago Times .

But Ulrich has not limited her pro bono focus to endangered species.

Ulrich has always had a passion for holocaust and genocide studies. During her undergraduate years at PSU she was fortunate to take a Holocaust and Genocide Lit class from English Prof. Greg Goekjian, whose father survived the Armenian genocide. This class not only stirred up her passion, but provided the foundation for the tireless advocate she has become. When she became aware of the genocide in Darfur in 2003, she reached out to friends, colleagues and family to raise awareness, she says. But “…it was during the summer of 2011, however, when I had my ‘enough moment’ upon learning about conflict minerals mined from eastern Democratic Republic of the Congo (DRC).”

Ask Ulrich about conflict minerals and she will readily tell you the details. Four minerals mined in eastern Congo are necessary for electronic devices to function properly: tin, tungsten, tantalum and gold. In the summer of 2011, Ulrich learned of the six million who have died in the Democratic Republic of Congo over the past decade, mostly women and children caught in the crossfire between the government troops and militias who fight to control the mines producing conflict minerals. This knowledge inspired her to raise awareness in the United States and to advocate for positive and proactive change with regard to the use of conflict minerals.

In the fall of 2011, Ulrich secured pledges and ran 54 miles over six weeks to raise funds for Run for Congo Women ( www.runforcongowomen.org ), a project of Women for Women International ( www.womenforwomen.org ). On International Women’s Day in the spring of 2012, she organized a group 10K walk/run with the proceeds to go to WfWI. She also persuaded Swanson Thomas Coon & Newton to sponsor the walk/run, along with multiple other local businesses (Foot Traffic, James Bean Café, Diversitech, Great Harvest and Starbucks).

Between her solo fundraiser and the group 10K, she has raised enough funds to sponsor six women in WfWI’s DR Congo program. In April 2012, Ulrich began her one-year term as a Volunteer WfWI Ambassador. She is already organizing her second RFCW Group Walk/Run, which will take place in March 2013 to coincide with International Women’s Day.

On the heels of these accomplishments, Ulrich joined with two local DRC advocates and cofounded the Oregon Coalition for Humanity ( www.facebook.com/OregonCoalitionforHumanity ), whose vision is to develop a permanent anti-genocide constituency in Oregon and the Pacific Northwest. The coalition is designed to link needs with resources, people with organizations, and organizations with events in order to have maximum impact. 2 Coalition founders believe that genocide is preventable and that, by building a permanent anti-genocide constituency, the words never again can become a reality.

Since its founding in April 2012, Ulrich’s coalition has met not only with Oregon’s Congressional representatives but also with the Conflict Free Program manager at Intel who is spearheading the company’s Conflict Free Microprocessor Project. Intel has publicly committed to offering a conflict free microprocessor by the end of 2013. The coalition also works in conjunction with the South Kivu Civil Society in eastern Congo to make sure that its efforts are in concert with the on-the-ground needs of those in eastern Congo.

What lies ahead for Ulrich’s coalition? Among other goals, she would like to see the Portland City Council pass a conflict free city resolution, which would make Portland the fourth city nationwide to pass such a resolution. The passage of such a resolution would signal to industry that concerns about conflict minerals go beyond individual consumers. Ulrich and and two colleagues will meet with Commissioner Fritz to work out how the resolution will be put into practice by the city, and will work that into the resolution before it is presented to the council. Ulrich is working to push the initiative forward with the city. Considering that she has gained support from 70 signers (local businesses, representatives of coalition-member organizations and individual citizens), her goals may be within reach. That’s no surprise to Ray Thomas, who says, “Amanda has demonstrated time and time again that she is willing to dig in and stay with a difficult project until it is completed accurately and perfectly. She is the driving wheel on which many of our cases turn.”

2. Currently the coalition consists of approximately 20 different local, national and international organizations operating in the metro area. The coalition works closely with The Enough Project’s Raise Hope for Congo campaign (www.raisehopeforcongo.org), as its current focus is to advocate for positive investment by the business sector in eastern Congo, and for the creation of conflict free electronic products. A testament to the coalition’s effectiveness is that it was featured by Enough on in their “Enough Said” blog: http://enoughproject.org/blogs/portland-washington-dc-how-we-got-our-call-strong-conflict-minerals-rules-us-sec.

ABOUT THE AUTHOR
Portland lawyer Cheryl Coon practices Social Security disability law with Swanson, Thomas, Coon & Newton and represents claimants for both SSDI and SSI benefits at all stages of the process. She chairs the board of the Environmental Law Alliance Worldwide. James Coon, a partner at the firm, whose practice has included workers’ compensation, personal injury and appellate law, contributed to this article, as did Nora Coon, a legal assistant at the firm who looks forward to attending law school at Lewis & Clark this fall.