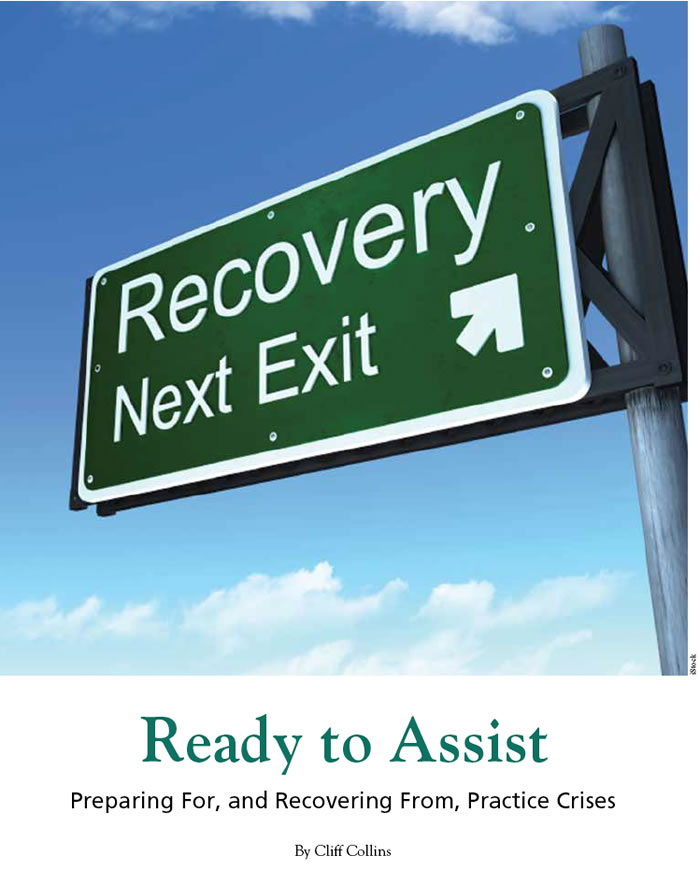 
All sorts of crises can happen to a law office that can disrupt lawyers’ ability to continue practicing.

“You don’t think it will happen to you, but it can,” warns Beverly Michaelis, a practice management adviser for the Professional Liability Fund.

A firm’s clients need to be protected if their lawyer suddenly is out of the picture or the firm’s physical space is damaged or inaccessible. Clients need assurance that their records will be in safe hands and that the firm will continue to be able to represent them and do work for them.

But neither of these is certain if a sole practitioner or law firm does not make contingency plans. If attorneys don’t have backup systems for files or their office space is not usable — either temporarily or permanently — they may not be able to function or take care of their clients. Legal consultants say lawyers should think of planning for crisis management preparation and recovery in the same vein as they approach advising clients: as contingency planning to ensure business continuity, or simply as managing risk. They should consider the time, effort and money spent on preparation for business disruption as a long-term investment in the viability of the firm.

This is where Oregon lawyers have an advantage over attorneys in all other states. The Professional Liability Fund, which is unique in the country, and Oregon Attorney Assistance Program provide a wide range of confidential and free services to all Oregon attorneys — not just the two-thirds who are in private practice and pay PLF dues, says Barbara Fishleder, director of personal and practice management assistance and executive director of the Oregon Attorney Assistance Program.

Some examples of this range of services are: helping lawyers set up a system so that if they incur a sudden illness or die, they will have someone they designated to come in and protect their clients; and aiding lawyers who have had a fire, lost their briefcase or had a break-in. The agencies also help attorneys who are addicted to drugs or alcohol or have a breakdown of some kind. And they assist new lawyers in setting up their office systems, as well as helping spouses close down the offices of ill or deceased attorneys.

“All the services we offer help prepare for anything, whether it be a natural or personal catastrophe,” says Michaelis. “If you follow our preparedness advice, you’re going to weather anything much better.”

She observes that unawareness is common about how the PLF operates. As an example, one lawyer expressed reluctance to reach out to the PLF because she didn’t realize that any communication would be kept confidential. That attorney also assumed that seeking assistance from the PLF would increase her PLF fee. Neither assumption is accurate, Michaelis says.

“It is true that people don’t understand the breadth and depth of what we offer. The attorney assistance [rogram is there to help in any event, health situations or catastrophe that might affect one person or many.”

Michaelis and her colleagues, Dee Crocker and Sheila Blackford, have to close down several practices around the state every month of the year, in situations where a lawyer either dies or becomes unable to continue practicing due to health or some other cause. In doing so, they have picked up valuable tips to offer attorneys about preparing for such events.

For example, Crocker advises that lawyers should keep a list of all their passwords and place it in a secure location so that a spouse or someone else they trust can access it in an emergency. She has seen instances where this did not happen, such as when the PLF was unable to access voice mails of a lawyer who died unexpectedly.

“Even the phone company is not able to retrieve them so we can access it,” Crocker says. “We would return calls and seek another attorney as part of what we do. We also check with the Oregon Judicial Department to determine what cases the attorney is the attorney of record on so we can notify the clients.”

One of the most important steps law offices can take is to make sure all files, forms and intellectual property are backed up and kept off-site, says Michaelis. She has seen cases where a fire or theft took away all information about clients, and the firm had nothing left.

“A break-in can happen anywhere at anytime. If someone has backup that is on-site, it’s like having no backup. Paperless offices better have redundant backups and off-site storage.”

In a few cases, burglars are targeting client files for purposes of identity theft. “A lot of men use their briefcases for storing checkbooks, and I think thieves know that,” she says. “We’ve had briefcases taken with client files after thieves watched as he made trips to the car. They waited for his briefcase.”

Still, she estimates that 90 percent of the time burglars are after computers and laptops, not information. But regardless of the motive, if there is no outside backup, that data will be lost.

Mark Johnson Roberts, who now is of counsel with Gevurtz Menashe in Portland, knows all about human-caused practice disruption. In a previous, three-partner firm in which he was a member, one of the partners committed embezzlement. Over a period of time, he stole about $100,000 from the firm before being caught by the other two partners.

“The first thing I’d say about prevention is, don’t assume your law partners are your friends,” he emphasizes. Even though attorneys try to keep good personal relations within a firm, a law firm is a business, and maintaining checks and balances is important, he says.

Johnson Roberts says he and the third partner thought they had kept an adequate system of checks and balances, “but it was predicated on people operating in good faith. There was no way to see what was going on until it was too late.”

“Have a healthy dose of suspicion if something seems amiss,” he advises. “We had warning signals several times. We should have attended to things right away. Keep careful track of where things are going, and keep track of the person” responsible for handling finances.

The firm fired the perpetrator and had to institute a lockout, both to the physical office itself and to computers and phone access.

He also recommends: “Don’t skimp on hiring people to help you. Lawyers are reluctant to hire other lawyers,” but getting competent representation is beneficial in such instances, he says. For instance, the required report to the Oregon State Bar “is better coming from someone else,” he points out.

“One lawyer advised us on business, and another lawyer advised on ethics.” They also retained an accountant, who ended up being a witness. He says hiring this representation was expensive but invaluable. “Most of what we did in the aftermath was right.”

In 1994, Beaverton attorney Allen Reel arrived at work one morning to find smoke pouring from his law office building and fire trucks surrounding it. The arsonist responsible for the fire inadvertently helped save the building by closing the door behind him.

“I was quite thankful the whole building didn’t burn down,” says Reel. “Only one office was gutted.”

Fortunately, his legal assistant, Karen Eskeldson, had backed up everything that was in the firm’s computer and taken it home.

But the whole experience was “a nightmare,” recalls Eskeldson, who has worked for Reel for 25 years. “We were allowed back in that afternoon to get any personal items like a calendar or Rolodex that we needed to function.”

She notes that in 1994, many files still were on paper, and afterward, a hired company had to come in and clean every item and piece of paper individually from the smoke damage.

Another law firm and its landlord offered Reel’s firm at the time, Moomaw, Miller & Reel, space during the three months needed for restoring his previous quarters. “That was really a blessing, too,” he says. And, Eskeldson adds: “We all pulled together as a firm. Sometimes (that meant) working on weekends.”

Reel said the firm carried business-interruption insurance, but insurance didn’t cover all that was lost, and is “not a smooth thing, by any means.”