Aiming for the Stars:
Martin Alvey Finds Satisfaction in Looking Up
By Cliff Collins 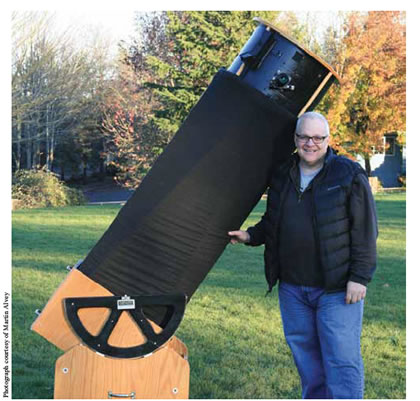 As a standout left tackle on Marshfield High School’s football team in Coos Bay, Martin L. Alvey probably saw stars at one time or another — or more likely, his opponents did after sustaining his fierce hits.

But in 1999 in OMSI’s parking lot, the stars Alvey saw changed his life.

He had taken his sons, then ages 6 and 4, to a Rose City Astronomers star party at the museum, thinking they might find it entertaining. Someone let him peer at the planet Saturn through a giant telescope, and Alvey was astonished. The image was so large and clear that he thought it was a photograph. From that moment on, Alvey was hooked.

In many of his off hours from his Portland law practice, Alvey devotes time to his avocation of amateur astronomy, affectionately dubbed stargazing. He attends Rose City Astronomers star parties several times a year from March through October and most years participates in the biggest event: the Oregon Star Party, held for a week in the Ochoco National Forest in eastern Oregon. The remote location, about 30 miles outside of Prineville, is situated on rocky soil at 5,000 feet elevation, under what a fellow stargazer and friend of Alvey’s, Dr. Michael R. Powers, calls one of the darkest skies in the country.

After the OMSI revelation, Alvey joined the astronomy club and started asking members, “What’s the best way to learn the sky?” They advised him to buy a good pair of binoculars and study guidebooks to study up on the objects he would see — and to hold off buying a telescope until he had learned the ropes. He followed that tip and did it for the first year, afterward borrowing older telescopes for the next six months. “Then I took the plunge and got my own telescope,” and he’s been pursuing the hobby enthusiastically ever since.

Stargazers can earn various levels of certification based on finding, identifying and describing specific objects in the sky, which is a keen motivation for Alvey. “I tend to be competitive and goal-oriented,” he says. “There’s just a real sense of accomplishment in hunting these things down.”

The pursuit, especially the once-a-year venture to the high desert country, takes him away from everyday cares and the stress of his practice. “It clears my head,” he explains, noting that his paralegal, Lisa Devlin, is adamant about scheduling him for star parties whenever possible, because when Alvey attends them, he returns refreshed and reinvigorated, she knows.

Powers says he and Alvey, who camp near each other each year at the event along with a third friend, John Harris, are “visual astronomers,” meaning their interest lies in observation rather than photography. Powers and Alvey sometimes bring along their children for the week, and the gathering is a “real family-oriented event,” says Powers. “There are diverse people from many different backgrounds who come together because of their love of the night sky. It’s total relaxation, because you’re focused on that connection and just being out.”

Raised in the Mills and Woods

Alvey is a fifth-generation Oregonian with deep roots in Coos Bay. His great-great maternal grandfather, Patrick Flanagan, was a coal miner and later a banker who was one of the first white settlers in the Coos Bay area. Alvey’s father was a high school teacher, and his mother was employed at the community college. Alvey wrestled and played football at Marshfield and worked in lumber mills and as a security guard while growing up. He then headed for Willamette University, where he was on the wrestling team and thought about going into law.

As the oldest of three children, he says, “it was a given that I would go to college.” (Both of his siblings also completed their college degrees.) At Willamette, Alvey was president of his fraternity and got involved in politics. He worked on then-state Sen. Ted Kulongoski’s campaign trying to unseat U.S. Sen. Bob Packwood, R-Ore., in 1980. Then, after Alvey graduated from Willamette, he worked for Kulongoski in his unsuccessful first candidacy for governor. Alvey spent the following year working as part of the Oregon House’s floor staff. Later in 1983, he abandoned Salem for Lewis & Clark Law School.

“I knew I wanted to be a lawyer, but I was not sure what type of law,” he says. After his first year at Lewis & Clark, he sought summer clerkships back home, writing to every firm in Coos Bay. He received a call from Michael R. Stebbins, a Coos Bay attorney who had helped him with a high school class project back when Alvey was a student at Marshfield. Alvey spent two summers clerking in Stebbins’ office. “He hired me to do worker’s comp cases, and I liked it,” says Alvey, who took that experience and parlayed it into freelance work for Portland firms while he was in law school.

After he passed the bar, he worked as an associate for a couple of firms in Portland and Astoria, met his now wife, Kathy Alvey, who was an attorney for Saif Corp., and moved to Portland. Stebbins, whom he considers his mentor, encouraged him to go out on his own, and Alvey did. Since 1996, he has been in sole practice, except he has had an associate, Robert Kinney, since 2009.

Up to 65 percent of his practice involves plaintiffs’ workers’ comp cases, and the remainder is devoted mostly to plaintiffs’ personal injury and Social Security cases. Stebbins believes Alvey’s background from a working-class area has been a key part of his success.

“This is a lunch-bucket town and always will be,” says Stebbins, whose firm is Stebbins, Coffey & Collins. “Growing up, I worked in the mills and woods, and so did he. We know and understand these people. They are some of the best clients a lawyer can have.” Alvey, he says, is “intellectually curious, always has been. That’s what makes him a good lawyer. I’ve always believed that if you do good work and work hard at it, you’re going to be happy in your profession. He’s done that. He’s been very successful.”

In handling cases for his clients, Alvey never gives up, Stebbins says. “Martin, he doesn’t quit; he won’t quit, and that goes a long way in this business. If he’s going to try a case, he does it with a lot of positive energy and enthusiasm and does a good job of avoiding the negative. Again, that comes from living in this town.”

Alvey acknowledges his upbringing aids his practice, and he credits Stebbins with helping him realize that. “I make the connection now,” Alvey says. “Mike, in addition to training me, really instilled in me a real respect for working people and the dignity of doing a good day’s work.”

ABOUT THE AUTHOR
Cliff Collins, a frequent Bulletin contributor, is a Portland-area freelance writer.