Professionalism and the Rules:
When Bad Behavior Crosses the Line
By Scott Morrill 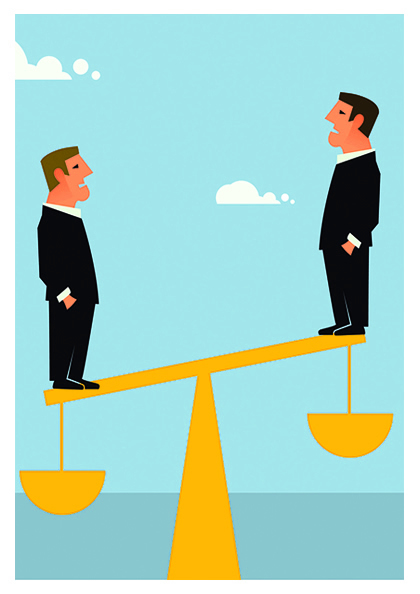 From where I sit in the Client Assistance Office (CAO), all lawyers are rude, obnoxious and discourteous boors who have nothing better to do than to make life miserable for opposing parties and even their own clients. At least that is what I hear from callers and read in many of the written complaints I review. We lump this conduct under the label of unprofessional behavior. While I know this is not true and I speak to lawyers all the time who are polite, respectful and professional, this poor reputation seems to prevail among people who make complaints and many people who have had little or no personal experience with lawyers.

Generally speaking, the Oregon State Bar does not have authority to discipline lawyers who are rude or discourteous. Poor customer service and an unpleasant demeanor are generally not ethical violations. We usually tell people who complain about rude behavior that there is little or nothing we can do about it. Occasionally, CAO tries to step in and let lawyers know when their conduct is affecting the lawyer-client relationship. I have written a gentle reminder to more than one lawyer that being polite usually does not hurt, but these reminders are enclosed in letters to complaining parties notifying them that I am dismissing their complaint. I also sometimes forward a copy of the Oregon Supreme Court’s Statement on Professionalism to lawyers who may have acted rashly.

Arguably, all of these rules have some impact on professionalism. Oregon RPC 3.5(d) prohibits lawyers from engaging in conduct intended to disrupt a tribunal. Commentary on this rule suggests that the duty to refrain from disruptive conduct applies to any proceeding of a tribunal, including depositions.1 While there are few cases dealing with the earlier DR 7-106(C)(6), which prohibited conduct that degraded a tribunal, In re Porter, 320 Or 692, 890 P2d 1377 (1995)is instructive. The lawyer was disciplined for appearing at a DMV hearing too intoxicated to participate, and his conduct was deemed undignified, discourteous and degrading to the hearings officer. This case shows that the conduct does not have to occur in a courtroom and that we expect lawyers to behave themselves in settings associated with the legal process.

Oregon RPC 3.3 requires a lawyer to tell the truth to a tribunal, disclose all relevant legal authority, even if adverse to the lawyer’s client, not to offer evidence the lawyer knows to be false and to inform the tribunal of all material facts in ex parte proceedings. The concept of professionalism at the core of this rule is fairness. While a lawyer does not have to present a disinterested position, the lawyer should not make argument based on a knowingly false representation of the law or fact.2 The former DR 7-102 (Representing a Client Within the Bounds of the Law) and DR 7-106 (Trial Conduct) are where the corresponding ideas are expressed in the former rules. Several lawyers have been disciplined under DR 7-102 (A)(5) for not telling the truth to a court. A lawyer was disciplined for taking a default order without first giving notice to the opposing attorney. Although there was no local rule requiring notice, it was a known local practice to give notice. In re Pierson, 12 DB Rptr 2 (1997). Again, fairness is the underlying concept.

Oregon RPC 3.4’s central theme is even more about fairness and is even titled Fairness To Opposing Party And Counsel. Generally, it requires lawyers to preserve evidence, not to counsel clients to disobey court orders, to comply with reasonable discovery requests and not to try to use evidence that is obviously not relevant. The commentary to this rule recognizes that documentary evidence is important to the adversarial system and should be preserved and made available to opposing parties, unless privileged.3 A lawyer is not expected to make the opposing side’s case but cannot help destroy, hide or alter evidence. A lawyer certainly may not pay a witness, other than experts, to testify. In In re Lafky, 11 DB Rptr 9 (1997), an attorney was disciplined for suggesting to a witness that his client would compensate him in exchange for supportive testimony.

Oregon RPC 4.2 prohibits a lawyer from communicating with a person the lawyer knows to be represented. Oregon RPC 4.3 controls a lawyer’s communication with unrepresented persons. It prohibits a lawyer from stating or implying that the lawyer is disinterested and from giving legal advice to the unrepresented person other than the advice to get a lawyer. These rules arguably give the lawyer an excuse for not speaking to opposing parties. Speaking to an unrepresented person may present opportunities for either the lawyer or opposing party to engage in discourteous conduct. They often are too emotionally involved in their own matter, which may lead to less than civil discussions. If you feel that your adversary is getting too excitable, just let them know that they should seek counsel and leave it at that. This lessens the risk of crossing the line created by Oregon RPC 4.3.

Oregon RPC 4.4(a) prohibits a lawyer from embarrassing or harassing third parties or from knowingly using methods of obtaining evidence that violate a person’s legal rights. CAO hears this complaint occasionally. Generally, it is the opposing party who is complaining that the lawyer is harassing friends or families or trying to turn them against them. Granted, most of the complaints we have reviewed strongly suggest that the opposing party is just worried that the truth will come out and hurt their case. However, the idea that a lawyer should respect third parties is a good one.

Oregon RPC 4.4(b) requires a lawyer who receives a document that was obviously sent to that lawyer by mistake to notify the sender. It does not require that the receiving lawyer return the document or forget about it, but at least the sender will not be surprised later when the receiving lawyer knows more than the sender expected. Also, depending on the document and the situation, there may be other law or reasons for the receiving lawyer to return the document or stop reading it as soon as it is obvious it was not intended.4 The obvious lesson here is that a lawyer may not ambush the other side with information the lawyer either should not have or that the other side did not know it had inadvertently provided. Evaluate your responsibilities to both your client and the law and be upfront about the mistake your opponent has made.

ORPC 8.4(a)(4) prohibits a lawyer from engaging in conduct that is prejudicial to the administration of justice. This rule and the former DR 1-102(A)(4) pick up a wide variety of transgressions, some of which include elements that may be considered professionalism. A lawyer in In re Honsowetz, Or S Ct No. S49296, 16 DB Rptr 345 (2002), was disciplined for repeatedly failing to serve a form of an order on opposing counsel before presenting it to the court. In In re Snyder, Or S Ct No. S49783, 16 DB Rptr 287 (2002), the lawyer was disciplined for failing to prepare an order as instructed by the court. This issue comes up in our office often. Opposing parties complain that a judge assigns the task of preparing an order to the opposing lawyer who then does not prepare the order. While a delay may actually benefit that lawyer’s client, at some point the delay starts to look like neglect or conduct prejudicial to the administration of justice. Of course, sometimes it is a simple matter of disagreement about how the order should read, but if a lawyer produces nothing, that looks like intentional conduct.

In re Meyer, 328 Or S Ct No S46237, 13 DB Rptr 17 (1999), is another case in which a lawyer was too intoxicated to participate in a hearing. This lawyer was disciplined under the conduct prejudicial rule. The lawyer in In re Crist, 327 Or 609, 965 P2d 1023 (1998), was disciplined under this rule for taking too long to render an arbitration decision. The point here is that conduct that may be prejudicial may contain elements of professionalism: promptness, personal behavior, following the rules and doing what a judge asks. These are good general guidelines to follow in every lawyer’s daily business.

Five jurisdictions (Arizona, Florida, Michigan, South Carolina and the U.S. District Court for the Northern District of Texas) have adopted mandatory civility rules. Other jurisdictions have unenforceable, suggested codes of civility and still others, like Oregon, have statements of professionalism. Whether all jurisdictions will move toward mandatory, enforceable civility rules remains to be seen. However, many lawyers are painfully aware of the reputation we have with much of the public, and it may eventually necessary to do something about that reputation even if not fully deserved.

So, while it is generally better to be polite, courteous and punctual and to follow the rules, the Oregon Rules of Professional Conduct (and the former disciplinary rules) may exert some pressure to be that way. Whether you put these behaviors in the category of professionalism, ethics rules or just plain common sense, you are less likely to have to answer to the bar if you conduct yourself accordingly.