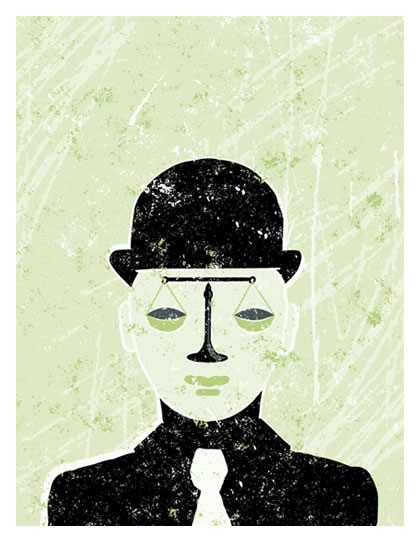 Larry Aschenbrenner recalls coming to Salem in February 1964 as the first State Public Defender. As he explains it, he was told to go see the “space man.” The “space man” was the person who found office space for state agencies. Aschenbrenner needed space for the newly created State Public Defender iffice. The “space man” found him an office in the State Office Building (now known as the Justice Building) at the corner of Court Street and 12th Avenue in Salem. That agency, now the Appellate Division of the Office of Public Defense Services (and located across the street from that original office), celebrates its 50th year on Jan. 1, 2014.

Although the office is only 50 years old, court-appointed counsel in Oregon dates back to statehood. In Oregon, all courts “have inherent power to appoint counsel for an indigent person accused of a crime when it is established that a need for counsel exists(.)” State v. Delaney, 221 Or 620, 641, 332 P2d 71 (1958). Indeed, that inherent power included the power of the Oregon Supreme Court to appoint appellate counsel in a criminal case when the need for counsel exists. Id. However, it does not appear that the courts, either trial or appellate, exercised that power regularly, if at all.

Several attorneys practicing in the late 1950s and early 1960s remember the local judges having a list of all attorneys in the county and simply appointing the next attorney on the list, whether or not that attorney had any criminal law experience. Barnes Ellis, a longtime proponent of public defense in Oregon, recalls the scene at the Portland Municipal Court in the old Portland Police Headquarters (now the offices of Stoll Berne). According to Ellis, several older attorneys would hang around the court, and a judge, looking for an attorney to appoint, would simply walk out to the hallway and choose one.

Although the legislature created the State Public Defender’s office in 1964, the role of that office was to act “as attorney at any stage of a proceeding before any court, including the Oregon Supreme Court, for an individual who is being deprived of his liberty in the custody of the warden of the Oregon State Penitentiary or of the superintendent of the Oregon Correctional Institution, and the proceeding is other than” a habeas corpus proceeding or a proceeding for criminal or civil contempt of court. ORS 138.770 (1963). Because the court system had not yet been unified and each circuit and district court was under the authority of the county in which it was located, the legislature was limited in what it could do regarding appointed counsel at the trial level.

In the 1963 session, the legislature created the “Public Defender Committee” and provided that the committee appoint a public defender, determine policies and procedures for the performance of the defender’s functions, determine standards of eligibility for the defendant and deputies, and approve a budget for the office. ORS 138.730 (1963). The first committee included Roy Shields (founding partner of Cosgrove Vergeer Kester), Wallace P. Carson (Salem attorney and father of former Chief Justice Wallace Carson Jr.), Robert W. Chandler (editor and publisher of the Bend Bulletin), Robert B. Frazer (editor of the Eugene Register-Guard) and Orval N. Thompson (Albany attorney). In the 1963-1965 biennium, the legislature budgeted $35,000 for the office and $149,422 for the following biennium. The Public Defender Committee created the following mission statement for the office:

It is the Public Defender’s primary responsibility to ensure that no indigent inmate of the Oregon State Penitentiary or the Oregon State Correctional Institution is deprived of the right to a constitutional and fair trial.

Aschenbrenner, one of 36 applicants for the position of public defender, grew up in Oregon, graduated from University of Oregon Law School in 1957 and, by 1964, had been in private practice, had sat as a Grants Pass justice of the peace and had served as the Josephine County district attorney. Once appointed as public defender, Aschenbrenner hired Gary Babcock as his deputy and sent word to the inmates at the Oregon State Penitentiary and Oregon State Correctional Institution (the only two prisons in Oregon at the time) that the office was available to represent inmates in post-conviction relief proceedings.

In 1964, unlike today, the post-conviction relief statutes provided no time limit for filing a petition. ORS 138.510 (1963). Within a short period of time, the office had received two to three thousand requests for assistance. He and Babcock went to the prisons every day to talk with inmates. Many of the cases involved inmates who pleaded guilty without being advised that they had a right to an attorney. Those cases, Aschenbrenner recalled, were the easy ones to win.

Other cases proved more challenging. For example, Elmer Collins, an inmate at the Oregon State Penitentiary, sent a letter requesting assistance to the Public Defender’s Office on April 20, 1965. Collins was serving a 20-year habitual offender sentence based, in part, on a prior rape conviction in Oklahoma. Collins claimed that his twin brother committed that offense and he had been misidentified as the perpetrator. Aschenbrenner was skeptical but, on further investigation, discovered that Collins did, in fact, have a twin brother. When Aschenbrenner located Elbert Collins, he was surprised to discover that Elbert and Elmer were identical. Ultimately, Elbert confessed to the Oklahoma crime. The problem for Aschenbrenner was that he had no authority to ask to vacate the Oklahoma conviction. However, he discovered that African Americans had been excluded from the Oklahoma jury, a practice that the Oklahoma Supreme Court had since banned. An Oregon Supreme Court decision, won by Gary Babcock, held that a person could challenge a habitual offender sentence on the grounds that one of the prior convictions was void. Clark v. Gladden, 247 Or 629, 432 P2d 182 (1967). Aschenbrenner won a reversal of Collins’s habitual offender sentence on the grounds that the Oklahoma conviction was void.

Six years after Aschenbrenner’s departure, a Willamette Law student named Paul De Muniz interned with the Public Defender’s Office. The office, then located in the Bureau of Labor and Industries Building, had three very popular internship positions for second-year law students (primarily, according to De Muniz, because the internships paid a stipend). De Muniz recalled that on his first day, he went from never having a law job to being given a transcript and told to write a brief. One of the cases De Muniz briefed while at the office, State v. Nicholson, involved a manslaughter conviction from Multnomah County. Robert Cannon, a deputy public defender, asked De Muniz if he would like to argue the case before the court of appeals. After the client agreed to allow De Muniz to argue the case, the office petitioned the court to allow him to appear on the client’s behalf. Under the student appearance rule, the presiding judicial officer had to consent to the appearance of any student before the court. This was the first time the court of appeals was asked to allow a student to appear. Much discussion ensued about the constitutionality of allowing a student to argue a case. Chief Judge Herbert Schwab asked for the brief, read it and signed the order. On the first day of his third year of law school, De Muniz argued State v. Nicholson before the court of appeals. Defendant prevailed on appeal. 19 Or App 226, 527 P2d 140 (1974).

Throughout his third year, De Muniz continued to work at the office part time. The summer after De Muniz graduated, the legislature agreed to fund a fifth attorney position in the office, and Babcock offered that position to De Muniz. They carved out an office space from the library, hired another secretary and De Muniz began his legal career as a deputy public defender. By the time he left 18 months later, De Muniz had argued and won two cases at the Oregon Supreme Court. State v. Valdez, 277 Or 621, 561 P2d 1006 (1977); State v. Smith, 277 Or 251, 560 P2d 1066 (1977). (On a side note, opposing counsel in Smith was Kevin Mannix, then an assistant attorney general.)

OPDS is now overseen by the Public Defense Service Commission. The executive director is appointed by the commission to manage both the Appellate Division and the Business Services Division (formerly Indigent Defense Services). The latter is given the task of contracting with trial level public defenders and setting performance standards.

From its humble roots, the Appellate Division now employs 43 attorneys and provides representation in direct appeals in criminal cases, appeals from adverse rulings of the Board of Parole and Post-Prison Supervision, and appeals from juvenile dependency and the termination of parental rights.

ABOUT THE AUTHOR
Marc D. Brown is a deputy defender with the Oregon Office of Public Defense Services in Salem.