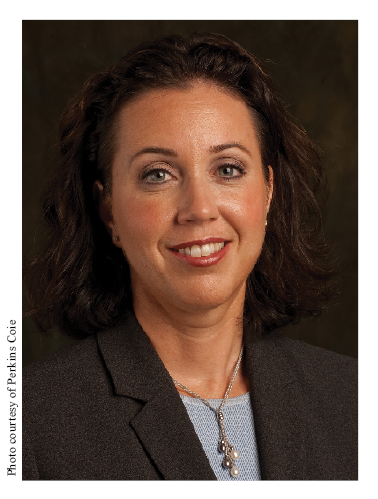 Sarah Crooks has had several invaluable mentors over the years, but perhaps the most influential was her Grandma Jean. Tuned into politics, Jean managed Gerald Ford’s presidential campaign in Nevada and several more political campaigns when she moved to California.

“She loved politics and she played the stock market,” Crooks says. “She was quite a force, and my middle name is Jean in honor of her.”

Thanks in part to Jean’s influence, Crooks had decided by her sophomore year in high school that she was interested in attending law school. Less than two decades after graduating from the University of Oregon School of Law, Crooks has earned the Justice Betty Roberts Award for promoting women in the profession and last year became the youngest attorney to ever receive the Edwin J. Peterson Professionalism Award.

A partner at Perkins Coie, Crooks has built a reputation as a strong commercial litigator. And amid these accomplishments, she remains committed to helping women and children trying to break free of domestic violence. It’s a pro bono endeavor that remains close to her heart and it’s how she began her career.

While growing up in Las Vegas, Crooks discovered that she was equally interested in business and law as potential careers. She earned a bachelor’s degree in economics from the University of Nevada, Las Vegas, in 1992 and then looked to the West Coast for law schools because UNLV didn’t have one. Scholarships helped pay for her undergraduate degree, and Crooks looked at law schools that participated in the Western Interstate Commission on Higher Education. She toured the U.O. law school and knew she’d found a good fit.

“It was a place that wanted me, which is always nice,” she says of the welcome she received there. “And it had an economics program, which was important because I was considering getting a master’s in economics along with my J.D.”

Crooks earned her law degree in 1996 and moved back to Nevada to take the bar exam there. A romantic relationship pulled her back to Oregon, and while she prepared to take the bar exam here she volunteered to serve as a Court Appointed Special Advocate (CASA), volunteered with the Hillsboro legal aid office on a stalking case, and volunteered to babysit the children of teen moms while they attended a local high school. These experiences led her to work at Oregon Legal Services Corp. in McMinnville, her first employer after passing the Oregon bar exam in the spring of 1997.

As she was beginning her career, Crooks clerked for Justice Susan Leeson at the Oregon Court of Appeals and the Oregon Supreme Court for two years, and completed another two-year clerkship for Judge Owen M. Panner in the U.S. District Court for the District of Oregon.

“I had four years to look at the different types of law that come before the courts, and I discovered that commercial litigation was more challenging intellectually,” she says.

In late 2001, she joined Perkins Coie and is now a partner in the firm’s commercial litigation group. Her practice allows her to combine her interests in business, economics and law by focusing on complex business litigation, class action lawsuits and attorney general investigations across several industry sectors, including the telecommunications, food and restaurant, childcare and education and real estate sectors. Crooks’ experience also includes representing clients in cases involving consumer protection, securities litigation, fraudulent transfer litigation and will contests.

Crooks says the most rewarding aspects of her practice include learning about her clients’ businesses and the teamwork involved in working on a case. Her business background has come in handy through it all, she notes.

“It taught me the logic to solve law problems, which is like math,” she says.

As she built her practice and honed her expertise, Crooks never lost sight of her determination to help those in need. Since 2002, she has volunteered for Legal Aid Services of Oregon representing domestic violence victims in obtaining restraining orders. She continues to make time for pro bono work amid her busy commercial litigation practice, recognizing the rewards that her volunteerism affords.

“I’m able to make an impact quickly while also using my trial skills,” she says, recalling a particular case in which she represented a woman who had filed a restraining order against the father of her child. The man soon began stalking Crooks’ client, threatening serious physical harm to her.

“That was very intense because it wasn’t moving somebody’s money, which is what I normally do in its crudest sense. In this case, somebody’s safety was at stake. I had to take a break from volunteering after that case,” she says.

Crooks, who couldn’t stay away from her pro bono work for long, has received a wealth of accolades for her commitment. They include Perkins Coie’s 2011 Pro Bono Leadership Award and the firm’s 2010 Austin Crowe Mentor Excellence Award. Oregon Women Lawyers honored her with the Justice Betty Roberts Award in 2010. In 2006, the Multnomah Bar Association, Legal Aid Services of Oregon and the Oregon Law Center recognized Crooks with the Michael E. Haglund Pro Bono Award.

Marion County Circuit Court Judge Mary Mertens James, who presented Crooks with the Edwin J. Peterson Professionalism Award, says that after working in a private practice herself, she can appreciate the demands a partner must juggle.

“Not only has she risen in the ranks of her law firm, but she has accomplished so much for the community, for victims of domestic violence, for the bar and for other women in the profession. That is nothing short of fantastic,” James says.

For her part, Crooks says she was completely taken aback that she was to receive the Peterson Award.

“I was pretty certain that meant I could retire,” she says with a laugh. “I was very surprised — I would never have thought that was in the cards.”

James, however, was not at all surprised. She refers to Crooks’ dedication to serving the legal community, which includes being a board member for the Campaign for Equal Justice since 2008; serving as a mock trial coach and judge for Classroom Law Project; and being an Oregon Girls State Mock Trial Instructor from 2008 through 2010. In addition, Crooks is a longtime leader in the Multnomah Bar Association, Oregon Women Lawyers and the National Conference of Women’s Bar Associations.

“Sarah has amazing energy, and she’s also very honest about how hard it is to put everything out there and balance it all,” James says. “I appreciate that honesty because anyone who thinks they can do it all and not have it take a toll eventually is fooling themselves, and so you do what you can. Some days, weeks and years you do amazing things, and other times you think, ‘I just need to get through today.’

“What Sarah does is over and above for a litigator in a high-end law firm,” James adds. “She does it with such humor and such grace, and you can see her passion. It just comes through in every encounter.”

ABOUT THE AUTHOR
Melody Finnemore is a Portland-area freelance writer. She is a frequent contributor to the Bulletin.