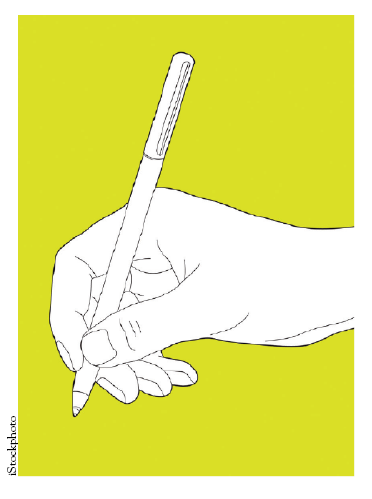 I try to declutter my house once a year. I don’t know when or how the new heaps of stuff accumulate. I suspect my high school mementos miraculously mate and multiply over the winter months. I know that it’s time to reorganize when I can’t close a closet door or shut a drawer anymore.

Decluttering those closets and drawers is relatively simple. A few guiding principles help me know what to look for. If I haven’t worn a particular shirt in a year, I know I should donate it. If I have only a vague recollection of a tchochke being sentimental but can’t remember why, it’s not worth keeping. And with just about everything else — from gadgets to cosmetics to kids’ toys — if I have two that serve the same purpose, one can probably go.

Unfortunately, our writing tends to get just as cluttered as our homes, but recognizing the problem might not be quite as easy. While our writing might not send unmistakable signals that it’s time to declutter — like overflowing drawers and overtaxed, bowing shelves — it does tend to send out a few cries for help. Here are some warning signs and editing strategies:

Excessive sentence length is one clear sign that you may have verbally overindulged. As a general rule, sentences should remain under 25 words. While not a hard-and-fast limit, sentences exceeding 25 words tend to tax your reader and obscure your meaning. Next time you proofread your writing, look for sentences that span more than two lines and count the words. You might be surprised how quickly they add up.

Mark Twain, America’s official authority on everything, advised writers to “substitute ‘damn’ every time you’re inclined to write ‘very’; your editor will delete it and the writing will be just as it should be.” Always trust Mark Twain.

Perhaps lawyers’ predilection for advocacy makes them particularly prone to using intensifiers. We really, really, really want to win, so we want to make our case very, very, very clear. But writing “look how clear this is!” doesn’t make the case clearer and is no substitute for thorough explanation and analysis. Instead of writing, “this fact is clearly relevant,” delete clearly and add a sentence explaining whyit’s relevant.

Whether an intensifier is unnecessary because it’s repetitive or just silly, it can typically be omitted from formal writing. Finding intensifiers is easy. Simply search for every very and clearly and delete it. Then look for other words that end with “ly” and consider whether they’re adding substance or drama. If drama, delete.

Prepositional words and their hangers-on aren’t always vital and can often be omitted. A preposition is a word that links a noun or pronoun to another part of the sentence, like with, across, through, and of. The word of is often unnecessary, so searching for it in your documents is an easy decluttering trick. With sentences where of is intended to denote the possessive, the fix is usually easy. For example, “the wounds of the victim” can become “the victim’s wounds.” With other prepositional phrases, you may find of similarly unnecessary. For example, a sentence like “the process of proofreading is arduous” becomes “the proofreading process is arduous” (or even more concisely, “proofreading is arduous”). These small changes won’t lead to huge verbal savings, but they may make for clearer, more straightforward sentences.

Nominalizations can yield unnecessary verbal clutter. A nominalization is a verb that has been converted to a noun. For example, the verb decided can be turned into made the decision to. Nominalizations are not grammatically verboten, but they do add extra length. And lawyers use them a lot. Here are some examples of nominalizations with a more concise revision:

“will conduct an investigation” becomes “will investigate”

Sometimes writers use nominalizations to cover for the fact that they’ve used a lazy verb. That is, the verb doesn’t do much, so the writer relies on the noun to pull all the weight in the sentence. For example, “the discussion concerned dogs” uses an empty verb (concerned), while “we discussed dogs” uses an active verb (discussed).

When writers turn verbs into nouns, they usually do it by adding “-ment” or “-ion” to the verb. So to find nominalizations in your writing, start by searching for words that end in “ment” and “ion.” That simple search won’t catch all of them, but it’s a starting point. Finding them all requires sentence-by-sentence evaluation of each verb/noun combination. Once you find a nominalization, ask whether you could convert that word back into a verb for a punchier — and shorter — sentence. Again, revising nominalizations won’t yield huge gains in decluttering, but even small cuts help.

Expletive construction means the pairing of “it” or “there” with a “to be” verb, like “is,” “was,” or “were.” Rooting these out requires a simply CTRL + F for “it is,” “it was,” “there are” and “there were.” Then revise when necessary. Here are some examples of phrases in expletive construction and their revisions.

“It is clear that the weather is better in California than Oregon.”

“It was crazy of us to move to Oregon.”

“California has better weather than Oregon.”

“We were crazy to move to Oregon.”

So easy and so much better! And as an added bonus, the revisions all have concrete subjects (California, Los Angeles, we) instead of the ambiguous “it” or “there.” With a simple revision, all three sentences are clearer and decluttered.

Consider this sentence and its revision:

“The candidate most likely will not be able to participate in the debate.”

“The candidate probably cannot participate in the debate.”

Two words replace seven in the original sentence. Nothing was technically wrong in the first sentence, but boy, was it ever a roundabout way of getting to the point. Or how about this doozy:

“It is crucial that we provide food considering the fact that people are happier in situations in which they are provided snacks.”

“We should provide food because people are happier when given snacks.”

About = as regards, in reference to, with regard to, concerning the matter of

Must, should = it is necessary that, it important that, there is a need for

Can = is able to, has the capacity for, has the ability to

Might, could = it is possible that, there is a chance that, the possibility exists for

Other than these few buzzwords, I have no easy trick for finding every circumlocution when proofreading. This type of editing requires working phrase by phrase through your writing and asking yourself whether the same idea could be expressed more efficiently and straightforwardly. As you edit your work, leave behind the proud writer who poured his heart into each word. Instead, try to put yourself into the position of the ruthless editor who needs to fit a long article into a small space. Leave no sentence unevaluated. As George Carlin said, thankfully without expletives, “question everything.”

You have just read nearly 1,500 words explaining how to get rid of a few words here and there. Talk about inefficient! But just as donating one pair of shoes makes for a neater closet, cleaning up even a single sentence makes for better writing. In the aggregate, small changes can make a big difference.