An Unexpected Challenge:
A Year of Unprecedented Claims for CSF
By Mitzi Naucler 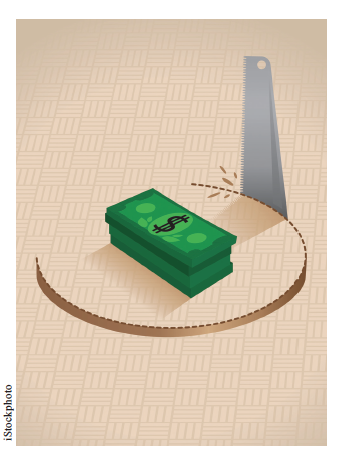 A perk of the office of OSB president is column space in the Bulletin whenever you have something important to say. The downside is that sometimes you have to share bad news. And while I do have some positive things to share, most of this column will fit under the “bad news” heading, and almost all of it involves money.

My main topic for this column is the financial situation of the OSB. Two years ago the Board of Governors launched a multiyear effort to refocus our organization on its core functions. We committed to holding the budget line, which meant cutting some programs while also saying “no” to a number of good ideas that have come our way. We have stayed focused on the bottom line and remained constantly aware of the financial pressures our members are facing in their practices and daily lives.

I am very pleased to announce we will not be asking the House of Delegates for a general fee increase this year. This will mark our eighth year without an increase, the longest span since the integrated bar was formed in 1935. We have managed this by cutting costs — paper, postage and travel throughout the organization and other expenses, including staff, in some areas. Nevertheless, we are looking at some tough decisions this fall, and despite our best efforts you can expect to see a fee increase in 2013 from an unexpected source: the Client Security Fund.

Background
Late in 2011 bar staff began receiving very troubling calls about Bend lawyer Bryan Gruetter. (For the record, I don’t relish naming names, but this story has been widely publicized already and telling it here without using Gruetter’s name would be both awkward to write and confusing to read.) On Jan. 17, 2012, the Board of Governors held a special meeting for the sole purpose of reviewing Disciplinary Counsel Jeff Sapiro’s request for authority to petition, pursuant to ORS 9.705 et seq., for appointment of a custodian over Gruetter’s law practice. We approved the request unanimously, and staff proceeded. The OSB was appointed custodian by temporary order on January 24, then became permanent custodian by stipulation on February 3. Effective April 19, the Oregon Supreme Court accepted Gruetter’s Form B resignation. His resignation recited that all his client files and records had been given to the OSB as custodian of his law practice. That’s the short version, and I will stop there other than to address the current issue.

So far this year the Client Security Fund has received 79 claims for reimbursement. Of those, 36 are from clients of Bryan Gruetter, and the eligible amount of the claims against him exceeds $860,000. Shocking as that number is, it represents only the amount allowable under CSF limits — the actual claims amount exceeds $1.2 million. Claims of this magnitude are simply unprecedented.

The CSF was created in 1967 “to relieve or mitigate pecuniary losses to the clients of active members caused by the dishonest conduct of those members in their practice of law.” Over the years, the CSF has paid several million dollars in awards to clients who were victims of dishonest lawyers. Relatively few claims have been paid at the maximum per-claim cap of $50,000; most have been under $15,000, and a considerable number have been less than $1,000. Prior to this year, the largest payout on claims involving any single lawyer was $179,000. Twenty-two of the other pending claims this year involve a single lawyer, which combined total more than $85,000.

Simply put, payment of the outstanding claims will deplete the fund and leave it severely “in the red” going into 2013.

The Board of Governors is committed to preserving the Client Security Fund as a fundamental piece of the bar’s public protection function. To do so, however, requires rebuilding the CSF’s reserves. Based on historical claims activity, the board believes that increasing the annual assessment to $45 (from $15) will allow the CSF to pay the pending claims and rebuild the reserve to its minimum level of $500,000 in four years.

The board is thankful for the hard work and thoughtful analysis of the volunteer members of our Client Security Fund Committee — who certainly got more than they signed up for this year. The committee considered different options for rebuilding the fund and presented different scenarios to the board. It found that doubling the assessment to $30, for instance, would be insufficient to cover operating expenses and estimated new claims, and even increasing it to $35 or $40 would leave the fund vulnerable and well outside its reserve requirement for many years to come. After considerable discussion, the committee voted unanimously to recommend that the annual CSF assessment be raised to $45 for 2013 and kept there until a sufficient reserve is rebuilt.

At the time I’m writing this column, the Board of Governors has not taken an official vote, but will have most likely done so by the time you read it. We have, however, discussed the matter extensively, and I believe our direction is clear. Don’t think for one minute that we’re happy about it. But it’s quite simply the right thing to do. I hope that Oregon’s lawyers will accept this $30 increase as a small price to pay for the enormous good will generated by the CSF, its enhancement of the public perception of lawyers, and the important role it plays in fulfilling the bar’s public protection mission.

Heading into my year as president I knew we would be facing challenges. I was confident in our board, our direction and our executive staff. We had a goal of no fee increase, and we were on track to make it. Sometimes, however, the unexpected occurs. I remain confident in our path, though, and I am proud of the work of this board and proud of the Oregon bar’s long-standing commitment to serve the public. I hope you are, too.

I do have other things I would like to tell you about, like our New Lawyer Mentor Program and OSB Legal Job Opportunities Task Force. I’ll save those reports for another time, however, and close by thanking you for your attention and your continued support of the organized bar.

ABOUT THE AUTHOR
Mitzi Naucler, the 2012 OSB president, is regional director of the Albany office of Legal Aid Services of Oregon.